.NET is now a core part of several Microsoft platforms, and each has focused on specific subset of APIs. A lot of thought has been put into crafting each API surface area. Many of you have asked how the .NET APIs available for Metro style apps were chosen. In the following post, Immo Landwerth – a program manager on the CLR’s Core Framework team – provides an answer to this question. — Brandon

Since the releases of the Windows 8 Consumer Preview and the Windows Developer Preview, developers have been busy exploring Windows 8, and many have asked questions about the subset of.NET Framework APIs that can be used to develop Windows Metro style apps. The natural tendency has been to compare the .NET APIs for Metro style apps to those available for other platforms such as Windows Phone. In particular, developers are wondering how much of their existing C# or Visual Basic source code they can expect to reasonably port to build a new Metro style app. We asked ourselves the same question when we carefully designed .NET APIs for Metro style apps.

In this post, I’d like to give you an overview of the APIs that are available to you for building Metro style apps. I will primarily discuss the design principles and requirements we used to decide which .NET Framework APIs to make available for Metro style app development. I will also touch on the relationships between .NET APIs for Metro style apps and other .NET API profiles.

From the start of this project, we realized that we had a great opportunity to simplify app development, but also some interesting challenges to resolve. Metro style apps enable developers to provide compelling end-user experiences across all the supported Windows 8 devices. In order to achieve this goal, many important changes were made within Windows, some of which affected our design approach to the .NET Framework APIs that we would expose.

We established the following goals to define the API surface of .NET for Metro style apps:

We also looked at a collection of Windows Phone and Silverlight apps to determine how developers used .NET Framework APIs in practice. These apps helped us assess the two last goals, in particular.

To design a new profile for Metro style apps, it made sense to start from an existing subset of APIs, and to pare it down while extending it toward the goal, which was to provide simple and well-designed .NET Framework APIs that specifically target Metro style app development. Note that the following diagram is intended for illustrative purposes only, and is not drawn to scale. 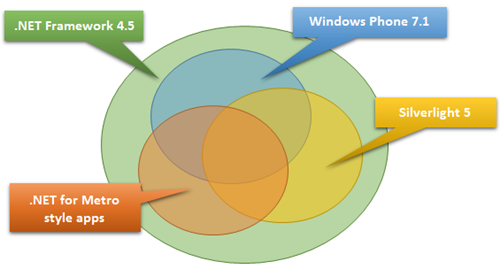 In this diagram, the smaller circles represent .NET profiles. The intersection of the profiles represents APIs that are common to all the profiles. Conceptually, you can think of .NET for Metro style apps as a subset of the .NET Framework that shares a relationship with other .NET Framework profiles. Portable Class Library does not show up in this diagram as a separate profile, but is a separate concept that deserves a post of its own.

With that diagram in mind, we decided to start with the .NET API subset for the Windows Phone, with selective additions from the full .NET Framework and Silverlight. While Windows Phone apps were likely to be similar to Metro style apps, the introduction of the Windows Runtime in Windows 8 meant that the Windows Phone profile was only a starting point.

In addition to the goals discussed earlier, we established a rigorous selection process. We made sure that every API we considered adding passed the criteria defined below:

Arriving at the final set of APIs

After our design phase and a progressive series of refinements, we arrived at a set of APIs that met the stated design goals. We validated this set of APIs with the apps that we had available, and requested feedback from Microsoft developers who were involved in early Metro style app development. We made more changes to enable the set of scenarios that the validation exercise uncovered. With the exception of a few more minor changes, this is the surface area we made available for Metro style app development with Visual Studio 11 Developer Preview, and more recently, with Visual Studio 11 Beta.

The diagram below shows the functionality exposed in the .NET for Metro style apps profile. The diagram should match what you see available in Visual Studio 11 Beta. The Windows Dev Center is a great place to explore these new APIs.

For a more quantitative view, the following table compares the new profile to existing profiles you might be familiar with. It’s not surprising that .NET for Metro style apps is much smaller than the full .NET Framework, and similar in size to the profile for Windows Phone. .NET for Metro style apps is even smaller than the Windows Phone profile, because we removed functionality such as the UI stack and sensors, which is exposed by the Windows Runtime.

If you want to learn more about the thinking process that went into the design of the API surface area, watch Krzysztof Cwalina’s A .NET developer’s view of Windows 8 app development talk from the BUILD conference.

Have you used the .NET for Metro style apps and the Windows Runtime APIs to build Metro style apps? Which APIs do you think are missing? Are there any additional APIs that should have been removed? Please tell us what you think.

Brandon Bray May 31, 2012
0 comment
Async in 4.5: Enabling Progress and Cancellation in Async APIs
The apps developers want to develop today are fast and fluid and the async features in .NET make this easier than ever. The world is also highly connected now which ma