Last month, we introduced preview tooling to incrementally migrate ASP.NET apps to ASP.NET Core. The tooling comprised two components – a Visual Studio extension that created a new ASP.NET Core app alongside an existing ASP.NET app such that endpoints could be gradually moved from one app to the other, and a library of System.Web adapter APIs allowing code to reference common System.Web APIs while targeting .NET Standard 2.0 and being usable in both ASP.NET and ASP.NET Core contexts.

We recently released preview 2 of this ASP.NET migration tooling. The updated tooling includes improvements to the code generated by the Visual Studio extension, additional System.Web surface area in the adapter library, and the ability to share authentication between the ASP.NET and ASP.NET Core apps so that users only have to log in once even if their browsing experience involves endpoints served by both the old and new apps.

As a reminder, development for the System.Web adapters is happening on GitHub. In that repository, you can find documentation, browse the latest source code, or contribute by creating issues or pull requests.

If this is your first time testing out the incremental ASP.NET migration tooling, you’ll need to install the Microsoft Project Migrations Visual Studio extension.

When you use that extension to migrate an ASP.NET project, it will automatically add references to preview 2 versions of the System.Web adapters. But if you need to reference the System.Web adapters directly (to use them in a class library, for example), they can be installed from NuGet: <PackageReference Include="Microsoft.AspNetCore.SystemWebAdapters" Version="1.0.0-preview.2.22316.1" />.

To update existing references to the System.Web adapters, just update to the preview 2 version of the NuGet package: 1.0.0-preview.2.22316.1.

If the ASP.NET app isn’t able to authenticate a user (perhaps no one is signed in yet), no claims principal will be returned. Instead, the ASP.NET app will return the HTTP status code and auth-related response headers (Location, Set-Cookie, and WWW-Authenticate, by default) that it would have returned if a user had directly tried to access endpoints in the ASP.NET app requiring authorization. These values are stored in the ASP.NET Core app and, if authentication is challenged (because the user is accessing a protected endpoint, for example), they are used to return an HTTP response to the user that would be similar to the challenge response received directly from the ASP.NET app.

Note, also, that logging out from the ASP.NET Core app in ASP.NET Identity scenarios does not work because logout in those scenarios is done with a POST request to the ASP.NET app which is currently disallowed due to anti-forgery token verification that does not work between the two apps. As a temporary workaround, apps can have logout actions redirect users to a page hosted by the ASP.NET app and have the user log out from there.

Let’s walk through an example of how to get started with sharing authentication in incremental ASP.NET migration scenarios.

To start, create a new ASP.NET MVC app and choose ‘Individual Accounts’ for authentication. This will give us a starting point to migrate from that includes ASP.NET Identity authentication. 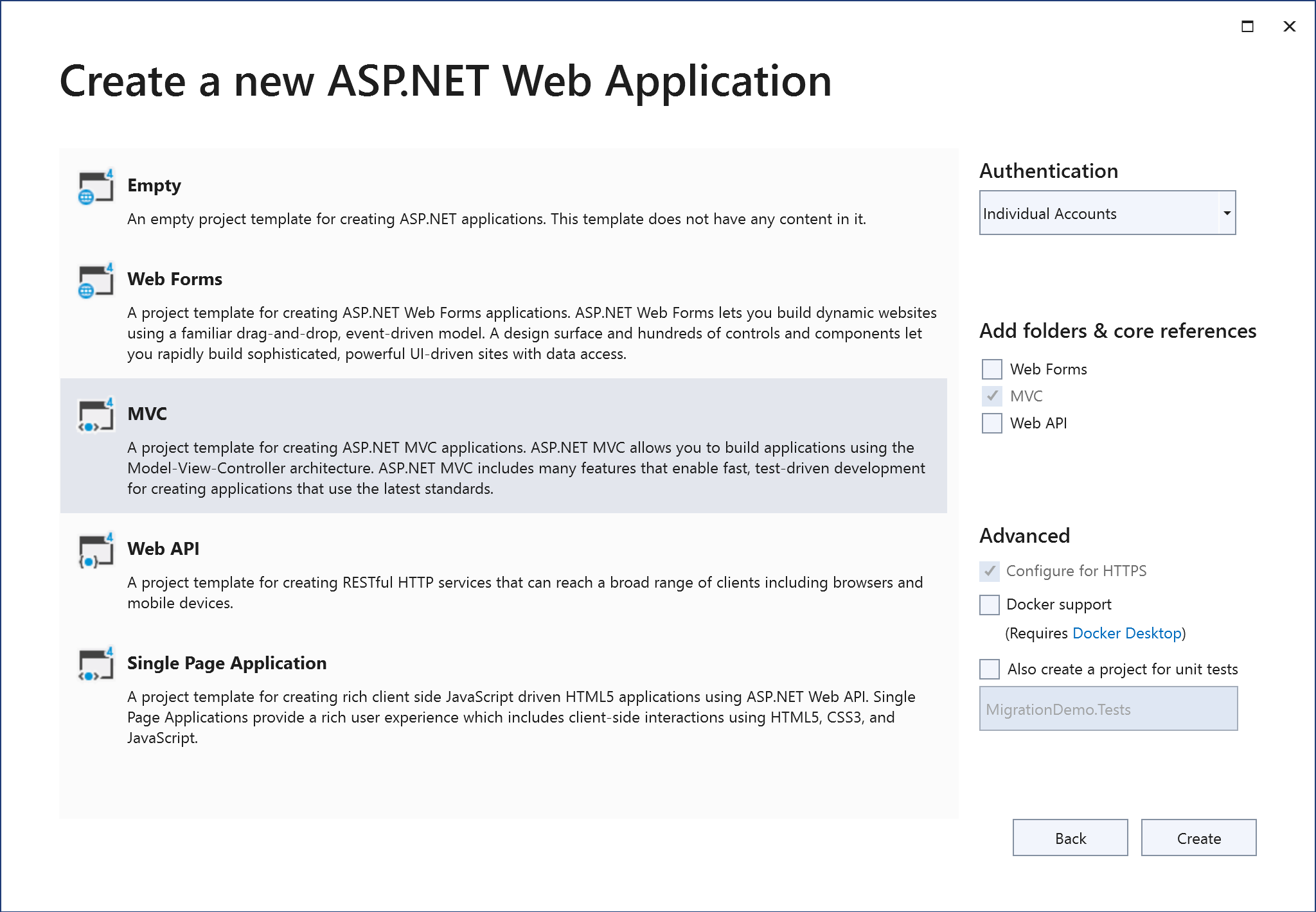 Launch the app to make sure it works and register a user.

Now, right click on the project in Visual Studio’s solution explorer and choose ‘Migrate Project’ to use the Project Migrations extension to setup a new ASP.NET Core app that will run and deploy alongside this one and allow us to gradually migrate endpoints over. Be sure to choose an MVC template since the initial app is MVC. 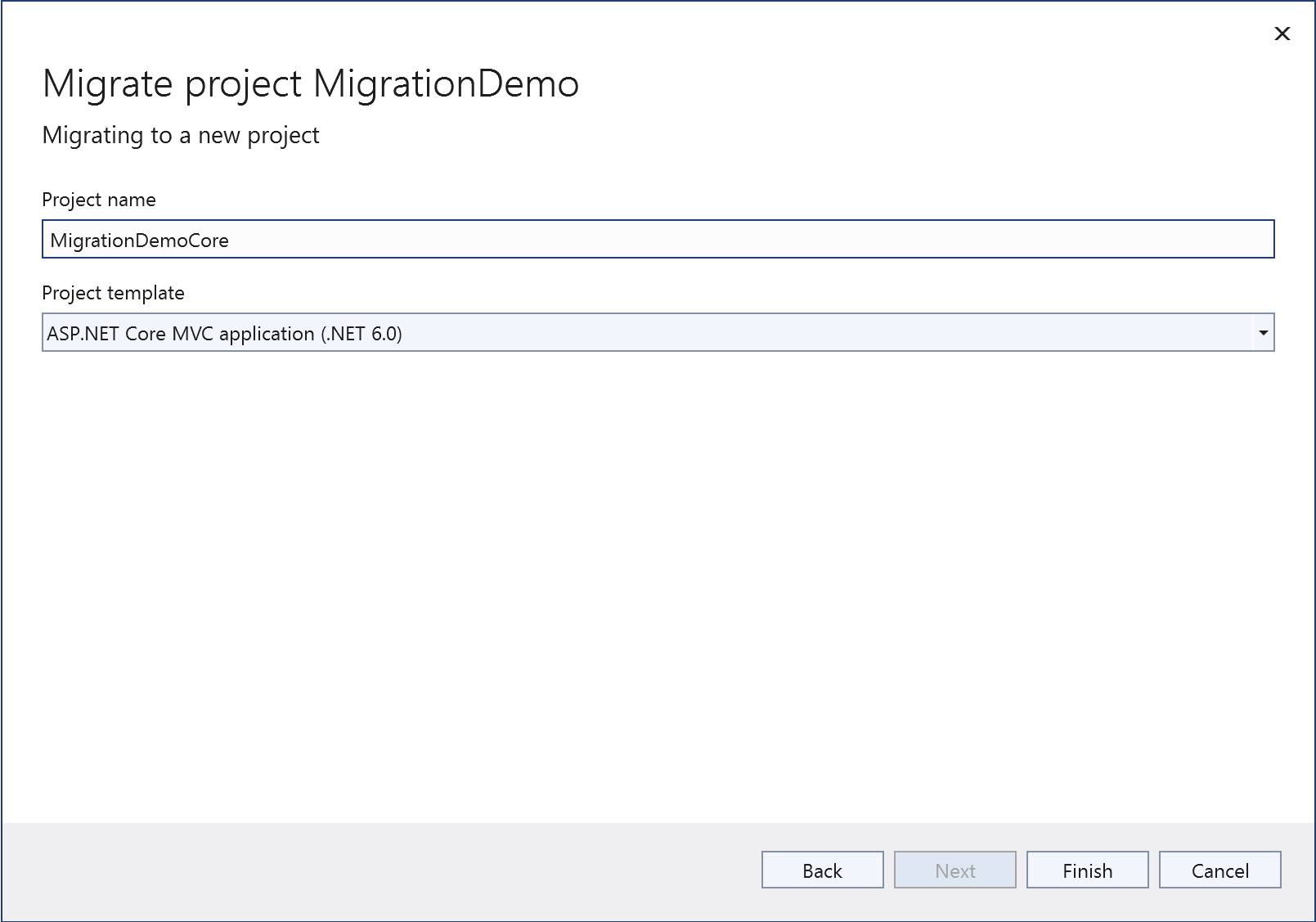 At this point, we have our new ASP.NET Core app created and proxying requests it can’t serve to the original ASP.NET app. We now need to configure remote app authentication so that user identity is shared between the two apps.

In the ASP.NET Core app’s Program.cs file add a call to AddRemoteAppAuthentication after the existing AddSystemWebAdapters call as shown here.

This will register the remote app authentication handler.

The second parameter passed to AddRemoteAppAuthentication is a method for configuring RemoteAppAuthenticationOptions. The two properties that must be set on this options object are the RemoteAppUrl which is the base URL authentication requests should be sent to (we can retrieve this from the YARP configuration already set up by the incremental migration tooling, as shown in the sample above) and an ApiKey string which is used to authenticate the ASP.NET Core app as a caller that is allowed to authenticate users with the remote app. The ApiKey string can be any string that is securely shared between the ASP.NET and ASP.NET Core apps. In this walk-through, we’re using a hard-coded string but in real-world scenarios this should be securely loaded from the applications’ environments or, even better, a secure store like Azure Key Vault.

We also need to enable authentication middleware for the ASP.NET Core application, so add a call to app.UseAuthentication() after the existing call to UseRouting but before the call to UseAuthorization.

Now that the ASP.NET Core app is setup to query the ASP.NET app for authentication, we need to configure the ASP.NET app to be able to respond to those requests. Navigate to the ASP.NET app’s global.asax.cs file and add the following call to the end of the Application_Start method:

First, replace the call to app.MapControllers(); in the ASP.NET Core app’s Program.cs with a call to MapDefaultControllerRoute instead so that we can easily route to ASP.NET Core controllers:

Next, add a Controllers folder to the ASP.NET Core app and create a simple controller called UserInfoController with a single Index action method: 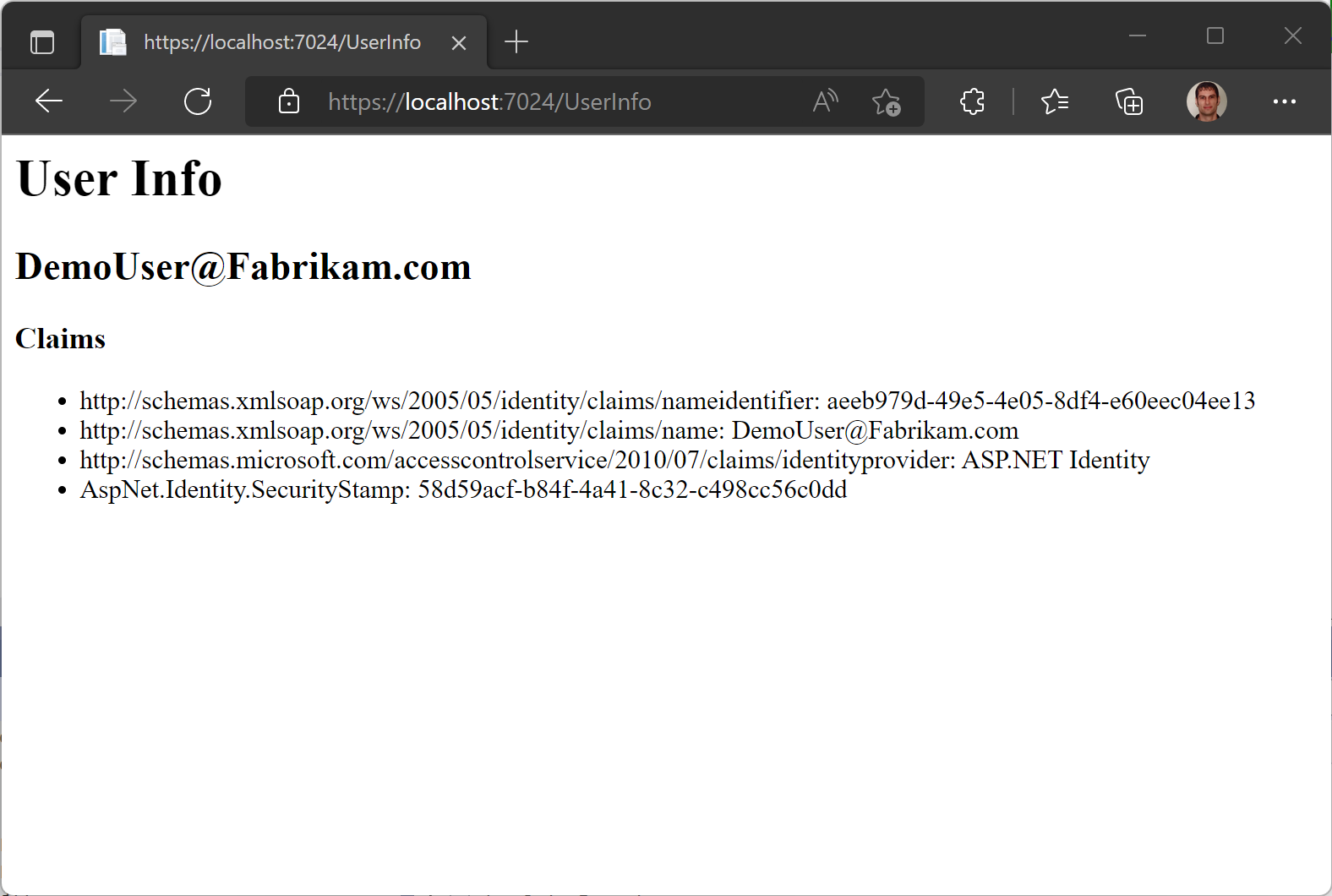 Note that even if you remove the [Authorize] attribute from /UserInfo, the endpoint will still have access to the user’s identity if a user is logged in. If there is no authenticated user, User.Identity will be null.

With this second preview release of incremental ASP.NET migration tooling, a number of new features have been added – most notably the ability to share authentication between the ASP.NET and ASP.NET Core apps in incremental upgrade scenarios. Using this feature, developers should be able to gradually move endpoints from an existing ASP.NET app into a new ASP.NET Core app even when those endpoints require authenticating the user.

In addition to the shared authentication work, we are also continuing to expand the System.Web adapters surface area to include more of the most-used APIs from System.Web.

If you have any feedback on the tooling – whether that’s bug reports or feature suggestions – you can contribute to the project on GitHub by creating issues or pull requests.

Getting Started with DevOps and .NET MAUI
Want to add DevOps to your .NET MAUI project? This post shows how to implement a starter pipeline using GitHub Actions and Azure DevOps.