As we’ve previously explained we receive various reports on how our NuGet packages don’t play nicely with NuGet’s package restore feature. In this blog post I’ll talk about an update we shipped to our infrastructure package Microsoft.Bcl.Build that reduces the impact.

To recap, some of our packages need to participate in the build in order to work properly. Examples of tasks that require build participation include generating binding redirects or selecting the appropriate native dependency based on the CPU architecture the build is producing. 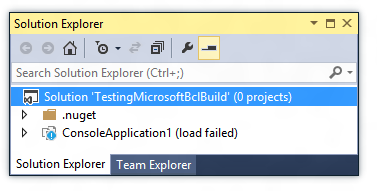 We’ve updated Microsoft.Bcl.Build to use a different approach. The new version will use a conditional import similar to what NuGet’s automatic import feature does. This will always allow the project to load in Visual Studio.

However, Microsoft.Bcl.Build also adds a target to your project that will run after the build is finished. This target checks whether the current build restored packages and if so fail the build with an actionable error message:

The build restored NuGet packages. Build the project again to include these packages in the build. For more information, see http://go.microsoft.com/fwlink/?LinkID=317568.

Building a second time will fix this error. Please note that this error will only appear if packages were missing so it’s not like you always have to build twice.

This solution doesn’t address build server / continuous integration (CI) scenarios. In order to successfully use package restore on the build server, you have two options:

Prior to version 2.7, NuGet makes package restore a bit more complicated than most people would like it to be:

NuGet 2.7 makes this a lot easier:

Also, the NuGet team is talking to all major providers of build/CI servers (incl. TFS) so that at some point the second step can be handled automatically by the build servers. For more details, have a look at the NuGet 2.7 release notes and the new Package Restore documentation.

The new version of Microsoft.Bcl.Build will ensure that solutions containing our packages will load successfully even if packages aren’t restored yet. This affects all .NET NuGet packages that depend on it, such as Microsoft.Net.Http, Microsoft.Bcl, and Microsoft.Bcl.Async.

Microsoft.Bcl.Build will give an actionable error message in cases the package was missing by asking you to build again.

When coupled with NuGet 2.7 where package restore is automatic in Visual Studio and isn’t implemented through MSBuild, the experience is transparent and smooth. However, this doesn’t address build server scenarios yet so you still need run nuget.exe restore solution.sln prior to build, or check-in the .targets file if preferred.