How your feedback is shaping .NET

Eight months ago we asked you to provide feedbackon the features you want us to ship. And you didn’t disappoint! Since then, we’ve seen hundreds of Tweets, blog posts and user voice votes. It’s great to be part of such a thriving community.

We are fully committed to improving the .NET ecosystem by being more open. To quote Habib from his Build talk:

Reacting to feedback is a critical part of making sure we’re doing a good job of enabling a great ecosystem.

One of the major feedback channels we monitor is User Voice. In this post, I’d like to look back and show case some the items we’ve resolved since we asked for more .NET advisors.

We’ve completed some very popular user voice items. In total, we’ve addressed well over 10,000 votes. Here is a picture of how the votes are distributed across the areas we’ve addressed: 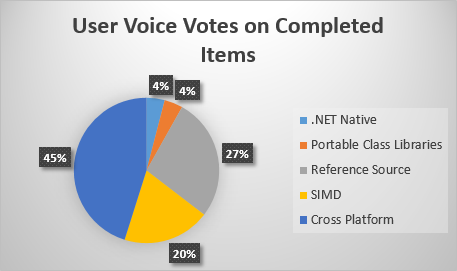 Now let’s look at each area.

I don’t know about you but sometimes I’ve a hard time using APIs that other people wrote. In many cases having documentation is sufficient to solve the problem. However, sometimes it’s just easier to look at the source of the API. Using the .NET Framework is no exception to this.

It seems I’m not alone – there are close to three thousand votes for improving the .NET Reference Source, our existing solution that allows you to step through the .NET Framework source in the debugger: 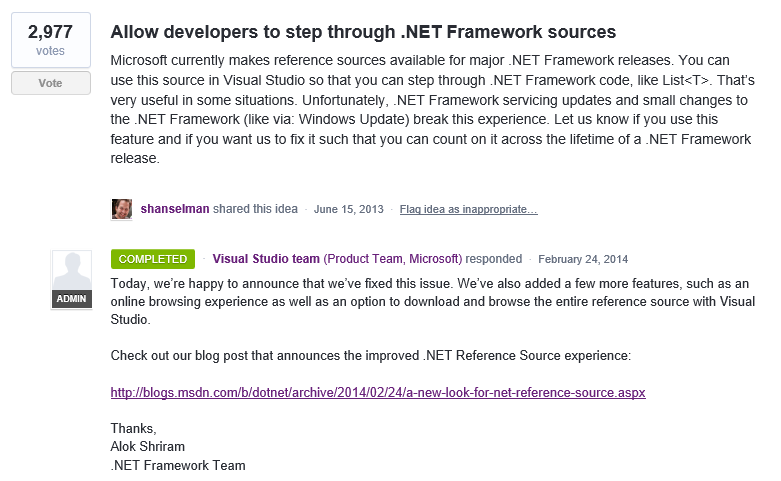 First of all, we’ve addressed the specific request, which is to ensure that .NET Framework source debugging works, even after your installation has been updated with a security patch.

However, we also sat back and thought whether enabling debugging is the best experience for understanding the code. In many cases, reading and browsing can be a much better experience. Thus, we also launched a new web site that hosts the latest version of the .NET Reference Source, called http://sourceof.net.

Make sure to check out the video that walks through the features of the browser:

Performance matters, especially in compute intense applications. Today, we don’t have a good story for leveraging SIMD instructions, which enables the processor to run computations in parallel within a single CPU core. As a result, the request to support SIMD is by far the most popular request for our code generation.

We announced a preview for SIMD support at Build and also provided a blog post on how you can leverage SIMD from your code. 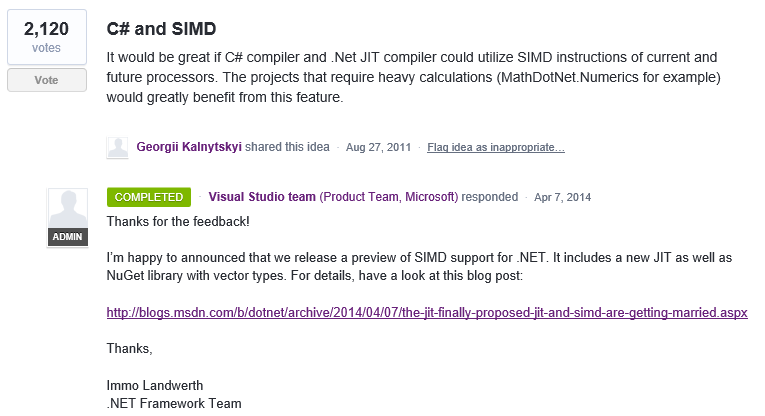 Until recently you had to make a decision: do you prefer the productivity of C# and .NET or do you need the power of the C++ optimizer. Wouldn’t it be great if those aspects would be orthogonal decisions?

We felt so too. At Build, we announced the preview of .NET Native. For more details, have a look at our post about the .NET Native Preview.

We’ve also improved the tooling itself, for example, many of you needed WinRT support as well as the ability to design Xaml. Those items are also addressed with Visual Studio 2013 Update 2.

We’re living in a many-device world now. Consequently, we’ve invested quite a lot into making newer features available via NuGet. NuGet packages enable you to take advantage of newer features without having to wait for the next .NET Framework release – or even an OS upgrade.

You told us that this isn’t good enough: you also needed a license that allows you to move your investments forward, to any platform.

We’ve addressed this concern by removing the platform restriction from our NuGet packages. 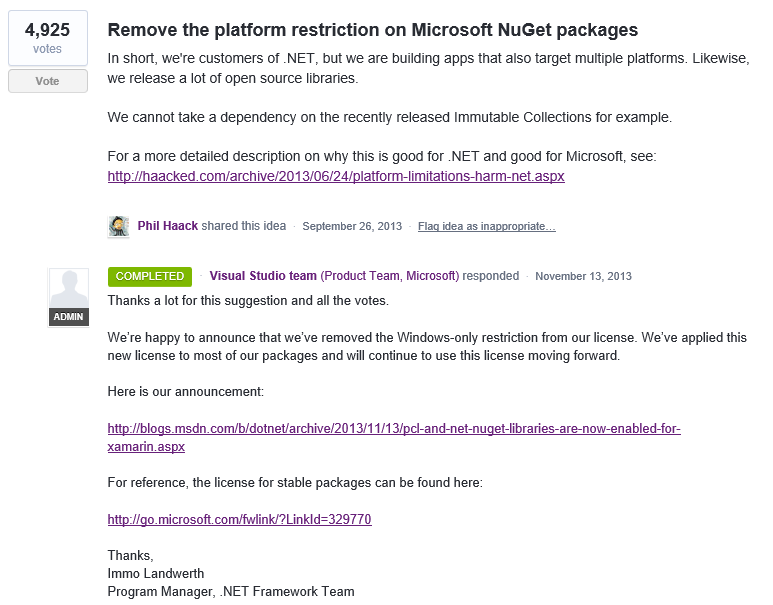 But we didn’t stop there – we also announced a collaboration with Xamarin to improve your cross-platform experience, in particular around building mobile applications.

In order make .NET great, we’ve asked you to advise us where we should focus our attention. Since that post we’ve completed numerous user voice items, addressing more than 10,000 votes.