Hi friends, I put together posts where I’m going to teach you the basics of the GitHub Actions platform. In this post, you’ll learn how GitHub Actions can improve your .NET development experience and team productivity. I’ll show you how to use them to automate common .NET app dev scenarios with workflow composition.

An introduction to GitHub Actions

Developers that use GitHub for managing their git repositories have a powerful continuous integration (CI) and continuous delivery (CD) feature with the help of GitHub Actions. A common developer scenario is when developers propose changes to the default branch (typically main) of a GitHub repository. These changes, while often scrutinized by reviewers, can have automated checks to ensure that the code compiles and tests pass.

To avoid mistakenly using some of these terms inaccurately, let’s define them:

Inside the GitHub workflow file

A workflow file defines a sequence of jobs and their corresponding steps to follow. Each workflow has a name and a set of triggers, or events to act on. You have to specify at least one trigger for your workflow to run unless it’s a reusable workflow. A common .NET GitHub workflow would be to build and test your C# code when changes are either pushed or when there’s a pull request targeting the default branch. Consider the following workflow file:

I’m not going to assume that you have a deep understanding of this workflow, and while it’s less than thirty lines — there is still a lot to unpack. I put together a sequence diagram (powered by Mermaid), that shows how a developer might visualize this workflow.

Here’s the same workflow file, but this time it is expanded with inline comments to add context (if you’re already familiar with the workflow syntax, feel free to skip past this):

The preceding workflow file contains many comments to help detail each area of the workflow. You might have noticed that the steps define various usages of GitHub Actions or simple run commands. The relationship between a GitHub Action and a consuming GitHub workflow is that workflows consume actions. A GitHub Action is only as powerful as the consuming workflow. Workflows can define anything from simple tasks to elaborate compositions and everything in between. For more information on creating GitHub workflows for .NET apps, see the following .NET docs resources:

I hope that you’re asking yourself, “why is this important?” Sure, we can create GitHub Actions, and we can compose workflows that consume them — but why is that important?! That answer is GitHub status checks 🤓.

One of the primary benefits of using workflows is to define conditional status checks that can deterministically fail a build. A workflow can be configured as a status check for a pull request (PR), and if the workflow fails, for example the source code in the pull request doesn’t compile — the PR can be blocked from being merged. Consider the following screen capture, which shows that two checks have failed, thus blocking the PR from being merged. 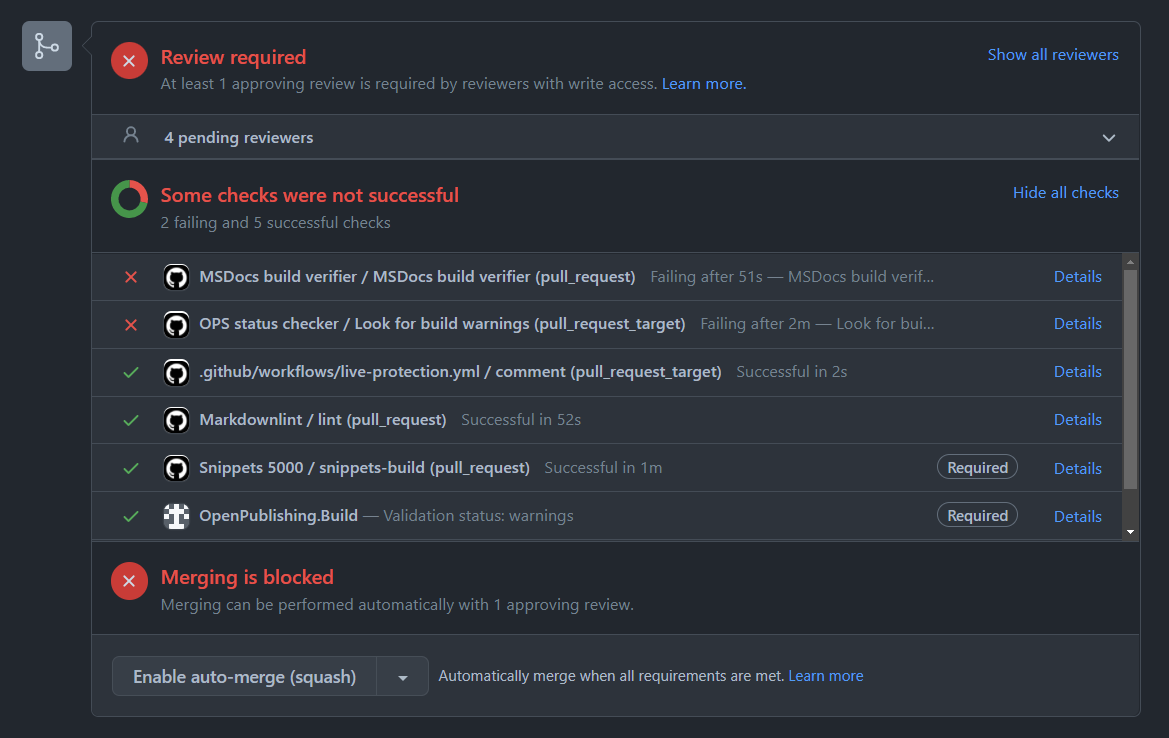 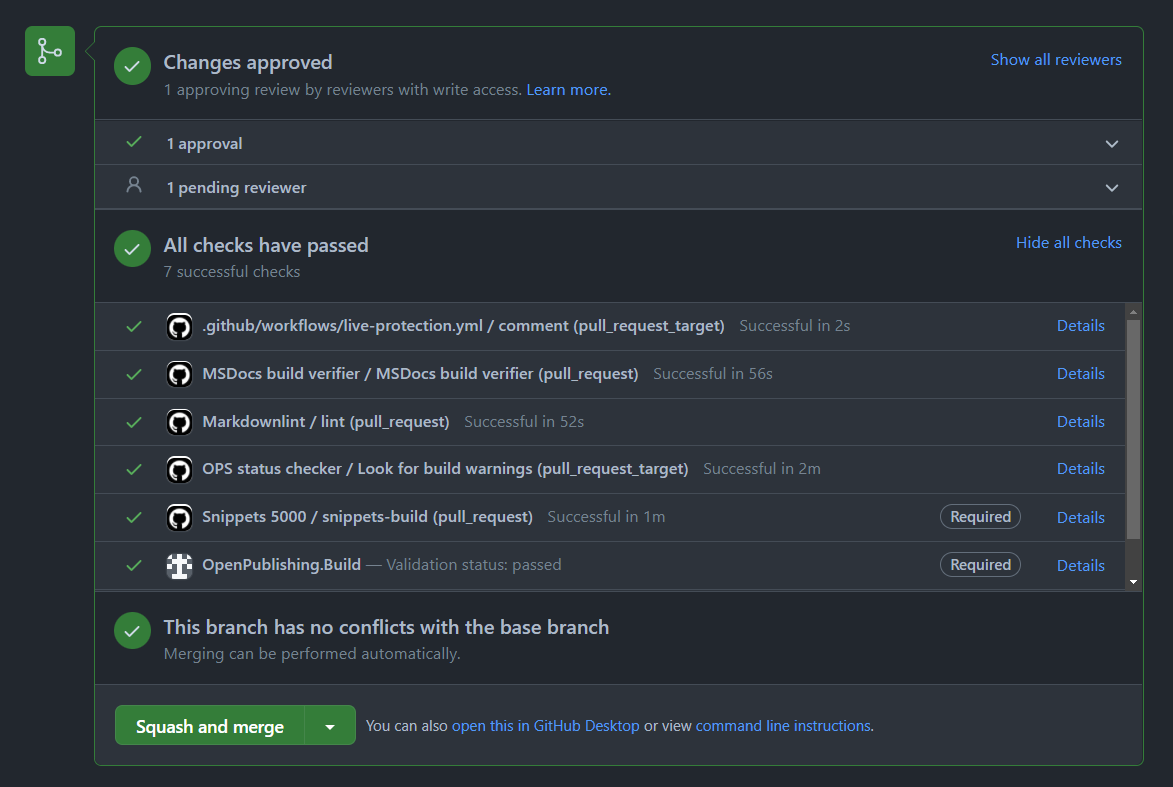 Using the previous workflow file as a point of reference, there are five steps — each step includes either the run or uses syntax:

Some steps rely on GitHub Actions and reference them with the uses syntax, while others run commands. For more information on the differences, see Workflow syntax for GitHub Actions: uses and run.

In addition to using the standard GitHub Actions or invoking .NET CLI commands using the run syntax, you might be interested in learning about some additional GitHub Actions.

The .NET developer community is building GitHub Actions that might be useful in your organizations. As an example, check out the zyborg/dotnet-tests-report which is a GitHub Action to run .NET tests and generate reports and badges. If you use this GitHub Action, be sure to give their repo a star ⭐.

There are many .NET GitHub Actions that can be consumed from workflows, see the GitHub Marketplace: .NET.

A word on .NET workloads

.NET runs anywhere, and you can use it to build anything. There are optional workloads that may need to be installed when building from a GitHub workflow. There are many workloads available, see the output of the dotnet workload search command as an example:

If you're writing a workflow for Blazor WebAssembly app, or .NET MAUI as an example — you'll likely run the dotnet workload install command as one of your steps. For example, an individual run step to install the WebAssembly build tools would look like:

In this post, I explained the key differences between GitHub Actions and GitHub workflows. I explained and scrutinized each line in an example workflow file. I then showed you how a developer might visualize the execution of a GitHub workflow as a sequence diagram. I shared a few additional resources you may not have known about. For more information, see .NET Docs: GitHub Actions and .NET.

This is just the start of blogs around using GitHub Actions for .NET. In future posts, I'll show how to create GitHub Actions using .NET. I'll walk you through upgrading an existing .NET GitHub Action that is used to automatically maintain a _CODEMETRICS.md file within the root of the repository. The code metrics analyze the C# source code of the target repository to determine things such as cyclomatic complexity and the maintainability index. In addition to these metrics, we'll add the ability to generate Mermaid class diagrams, which is now natively supported by GitHub flavored markdown.

Training a ML.NET Model with Azure ML
Learn how to create a training pipeline for ML.NET using Azure ML and Azure Devops.

Becca McHenry
February 28, 2022
4 comments
Sharing code between ASP.NET and ASP.NET Core
You can begin your journey to ASP.NET Core by migrating one page at a time and do it by reusing the code you already have today. This article shows how to share controllers, models, and views from the 10-year-old MVC Music Store with a new ASP.NET Core project.