Here’s a summary of what’s new in this preview release:

To get started with ASP.NET Core in .NET 7 Preview 6, install the .NET 7 SDK.

Note: Building .NET 6 Blazor projects with the .NET 7 SDK and the .NET 7 WebAssembly build tools is currently not supported. This will be addressed in a future .NET 7 update: dotnet/runtime#65211.

See also the full list of breaking changes in ASP.NET Core for .NET 7.

The request decompression middleware is a new middleware that uses the Content-Encoding HTTP header to automatically identify and decompress requests with compressed content so that the developer of the server does not need to handle this themselves.

Support for Brotli (br), Deflate (deflate), and GZip (gzip) are included out of the box. Other content encodings can be added by registering a custom decompression provider class, which implements the IDecompressionProvider interface, along with a Content-Encoding header value in RequestDecompressionOptions.

Thanks to @david-acker for contributing this feature!

Output caching is a new middleware that helps you store results from your web app and serve them from a cache rather than computing them every time, which improves performance and frees up resources for other activities.

Requests sent to “/notcached” will see the current time. But the “/cached” endpoint uses the .CacheOutput() extension, so each request to “/cached” after the first one will get a cached response (the time returned will not update after the first request).

There are many more advanced ways to customize output caching. The example below shows how VaryByQuery can be used to control caching based on a query parameter:

In addition to varying by query strings, there is also support for varying cached responses by headers (VaryByHeader) or by custom values (VaryByValue).

The output caching middleware has built in protection for some common pitfalls of caching. Imagine the situation where you have a busy web service and you revoke/invalidate a popular cache entry. When that happens, there can be many requests for that entry all at the same time, and because the response is not in the cache at that moment, the server would have to process each of those requests.

Resource locking is a feature of output caching that prevents the server from being overwhelmed by these “cache stampedes”. It does this by only allowing one request for the resource to be processed, while the rest of them wait for the cache entry to be updated. Once that happens, all of the waiting requests can be served from the cache, preventing the server from being inundated by redundant work.

If you’d like to see a more complete example demonstrating these and other features of output caching, take a look at the OutputCachingSample app in the ASP.NET Core repo.

For a deeper dive into the output caching feature, be sure to check out this on-demand session we presented at Build 2022. Note that some of the features/APIs discussed have changed since the talk was recorded.

We plan to continue to add functionality to this middleware, so please let us know what you’d like to see.

The rate limiting middleware now supports rate limiting on specific endpoints, which can be combined with a global limiter that runs on all requests. Below is a sample that adds a TokenBucketRateLimiter to an endpoint, and uses a global ConcurrencyLimiter:

To learn more about rate limiting with ASP.NET Core, check out the Announcing Rate Limiting for .NET blog post.

Kestrel support for WebSockets over HTTP/2

WebSockets were originally designed for HTTP/1.1 but have since been adapted to work over HTTP/2. Using WebSockets over HTTP/2 lets you take advantage of new features like header compression and multiplexing that reduce the time and resources needed when making multiple requests to the server. That support is now available in Kestrel on all HTTP/2 enabled platforms.

The HTTP version negotiation is automatic in browsers and Kestrel so no new APIs are needed. You can follow the existing ASP.NET Core samples for using WebSockets over HTTP/2. Note HTTP/2 WebSockets use CONNECT requests rather than GET, so your routes and controllers may need updating. Chrome and Edge have HTTP/2 WebSockets enabled by default, and you can enable it in FireFox on the about:config page with the network.http.spdy.websockets flag.

SignalR and the SignalR browser JavaScript client have been updated to support WebSockets over HTTP/2. Support is also coming to ClientWebSocket and YARP soon.

Kestrel uses ConcurrentQueue for many purposes. One purpose is scheduling I/O operations in Kestrel’s default Socket transport. Partitioning the ConcurrentQueue based on the associated socket reduces contention and increases throughput on machines with many CPU cores.

Recent profiling on new even higher core machines like the 80 core ARM64 Ampere Altra VMs recently made available on Azure showed a lot of contention in one of Kestrel’s other ConcurrentQueue instances, the PinnedMemoryPool which Kestrel uses to cache byte buffers.

In Preview 6, Kestrel’s memory pool is now partitioned the same way as its I/O queue leading to much lower contention and higher throughput on high core machines. We’re seeing an over 500% RPS improvement in the TechEmpower plaintext benchmark on the previously mentioned 80 core ARM64 VMs and a nearly 100% improvement on 48 Core AMD VMs in our HTTPS JSON benchmark. 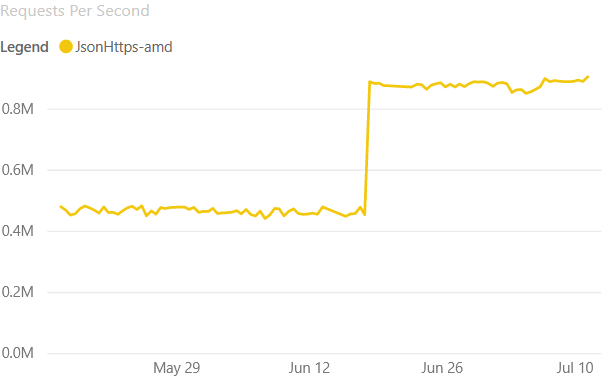 You can now specify additional request headers to log when using the W3C logger by calling AdditionalRequestHeaders() on W3CLoggerOptions:

Thanks to @dustinsoftware for contributing this feature!

Blazor has two new project templates for starting from a blank slate. The new “Blazor Server App Empty” and “Blazor WebAssembly App Empty” project templates are just like their non-empty counterparts but without any extra demo code. These empty templates have only a very basic home page, and we’ve also removed Bootstrap so you can start with whatever CSS framework you prefer.

The new templates are available from within Visual Studio once you install the .NET 7 SDK: 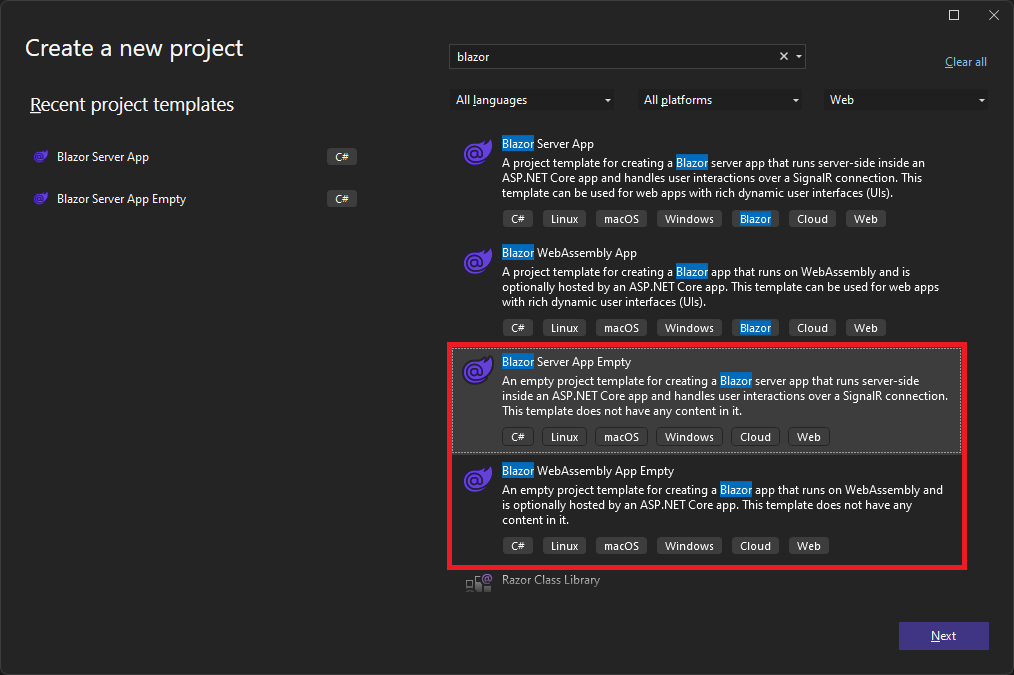 You can also use the empty Blazor project templates from the command-line:

Support for AES-CBC, PBKDF2, and HKDF algorithms are planned for a future .NET 7 update.

The previously experimental Microsoft.AspNetCore.Components.CustomElements package for building standards based custom elements with Blazor is no longer experimental and is now part of the .NET 7 release.

You can then use this custom element with any other web framework you’d like:

For additional details, refer to the Blazor docs on building custom elements.

To get started with QuickGrid:

You can see examples of QuickGrid in action on the QuickGrid for Blazor demo site, which includes examples of:

It’s not a goal to add all the features to QuickGrid that full-blown commercial grids tend to have, for example hierarchical rows, drag-to-reorder columns, or Excel-like range selections. If you need those, continue using commercial grids or other open-source options.

QuickGrid is currently experimental, which means it’s not officially supported and isn’t committed to ship as part of .NET 7 or any future .NET release at this time. But, QuickGrid is open source and freely available to use. We hope you’ll give it a try and let us know what you think!

gRPC JSON transcoding is a new feature in .NET 7 for turning gRPC APIs into RESTful APIs.

New in Preview 6 is support for multi-segment parameters in gRPC JSON transcoding routes. This feature brings ASP.NET Core transcoding into parity with other transcoding solutions in the gRPC ecosystem.

Route groups were introduced in .NET 7 Preview 4 and allow defining groups of endpoints with a common route prefix and a common set of conventions. Conventions include extension methods like RequireAuthorization(), RequireCors() and their associated attributes. Conventions add metadata to an endpoint that other middleware (authorization, CORS, etc.) typically act on.

Similarly, WithOpenApi() and AddFilter() targeted RouteHandlerBuilder instead of IEndpointConventionBuilder making them incompatible with route groups. Supporting these required rethinking how groups work internally to allow group conventions to both observe metadata about individual endpoints and still modify the metadata and even the final RequestDelegate generated for the endpoint. This was made possible through a change to EndpointDataSource, but the key takeaway is that you can now call WithOpenApi() and AddFilter() on route groups in Preview 6.

NOTE: AddFilter() has been renamed to AddRouteHandlerFilter() in Preview 6 and will be renamed again to AddEndpointFilter() starting in Preview 7.

We hope you enjoy this preview release of ASP.NET Core in .NET 7. Let us know what you think about these new improvements by filing issues on GitHub.

Thanks for trying out ASP.NET Core!