The .NET Framework 4.7.2 is supported on the following Windows versions:

The .NET Framework 4.7.2 is supported on the following Windows Server versions:

Dependency injection (DI) is a technique whereby one object supplies the dependencies of another object. It decouples the objects so that no client code has to be changed simply because an object it depends on needs to be changed to a different one. MVC Framework already supports dependency injection, but it has been very difficult to use this technique in ASP.NET Web Forms application. This new feature will make it much easier to use dependency injection in ASP.NET Web Forms application. This feature enables the following:
Here’s a simple example of how you can use this feature.
Step 1 – Implement IServiceProvider. You can implement your own DI logic in it or plug in another DI framework, e.g. Unity, Ninject. The following example demonstrates injecting an ILog object through the constructor.
Step 2 – Set WebObjectActivator in Global.asax.
Step 3 – Use Dependency Injection in your Webform page.

SameSite prevents the browser from sending this cookie along with cross-site requests.  In .NET Framework 4.7.2, a new property SameSite has been added in HttpCookie type and ASP.NET will add a SameSite attribute into the set-cookie header if HttpCookie.SameSite is set to SameSiteMode.Strict or SameSiteMode.Lax. The support for SameSite cookie is two-fold in this case:

You can set SameSite for a HttpCookie object as follows.

You can configure HttpCookie SameSite at application level through web.config as follows.

You can add SameSite for FormsAuthentication and SessionState cookies through web.config.

Earlier WPF developers were unable to deploy applications that specify HDPI settings other than the default System Aware via ClickOnce. When an end user tried to launch this type of application via ClickOnce they were unable to run it because of a failure in parsing the ClickOnce manifest. Now, with .NET Framework 4.7.2, WPF developers can choose ClickOnce deployments when they are using their application manifest to specify new DPI Awareness modes. With this feature, users on Windows 10 Spring Creators Update or later will be able to specify latest HDPI settings such as PerMonV2 and launch these applications without any problems.
This enables application developers to take advantage of the new HDPI capabilities and can now continue to deploy via ClickOnce:

Growing compliance and security demand requires many customers to use Multi-Factor authentication (MFA).  In addition, current best practices directs developers from not including any user password directly in the connection string. We have extended SqlClient Connection String by introducing a new Azure AD Interactive authentication keyword to support MFA. This also enables support of Azure AD Authentication.

This feature introduces a new value for the existing “Authentication” keyword, specifying a new authentication method called “Active Directory Interactive”. The new interactive method supports native and federated Azure AD users as well as Azure AD guest users.  When this method is being used, the MFA authentication imposed by Azure AD is supported for SQL DB. In addition, a user password is requested as part of an interactive dialog enabling us to adhere to security best practices.

This feature can be configured with tools like SQL Server Data Tools (SSDT), as illustrated below. In the latest Visual Studio 15.7 preview, a new authentication option called “Active Directory Interactive Authentication” can be used to support MFA authentication to SQL database. 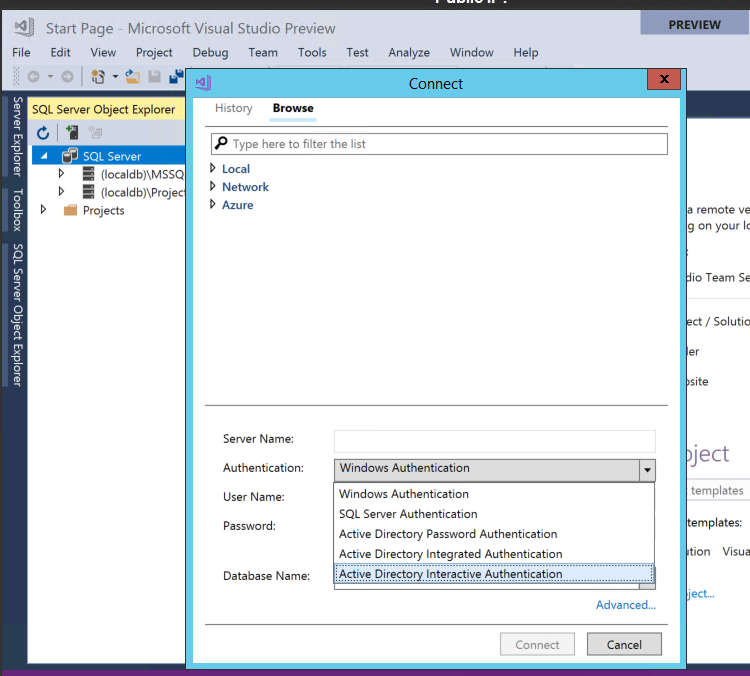 This simplifies the pattern of creating an RSA or DSA object and calling ImportParameters. The ‘before’ and ‘after’ simplification is illustrated below.
When generating a new RSA or DSA key with a specific keysize the new size overloads can be utilized.

New constructor overloads have been added to Rfc2898DeriveBytes that accepts a HashAlgorithmName to identify which HMAC algorithm should be used when deriving keys.  Developers are encouraged to generate new keys with a SHA-2-based HMAC as follows instead of using HMAC_SHA1.

PFX import can optionally load private keys directly from memory, bypassing the hard drive. The X509KeyStorageFlags enumeration has a new member, EphemeralKeySet. When this flag is specified in an X509Certificate2 constructor or X509Certificate2Collection.Import method, the private keys will be loaded as ephemeral keys. This avoids keys being visible on the disk.

The following example creates a CSR to be valid as a TLS Server Authentication certificate for www.adatum.com. Furthermore, adatum.com is signed with an existing RSA key using RSA-PSS with SHA-2-256.

The .NET Framework now enables workloads to generate self-signed certificates in a programmatic manner. This is frequently useful in test scenarios.

The following example creates a self-signed version of a TLS Server Authentication certificate for www.adatum.com, using an existing ECDSA key with an ECDSA-SHA-2-256 signature.

This feature improves the throughput of decompressing ZIP archives by using native implementation of ZIP. This enables up-to 3x increase in the throughput of ZIP archives during decompression. There are minor differences between the existing and native implementation, hence this feature is enabled by default only for applications targeting .NET Framework 4.7.2. Older applications can opt-into this behavior by using the following AppContext switch:

In .NET Framework 4.7.2 we have added a few APIs to the standard Collection types that will enable new functionality as follows.
The new Collection APIs are listed below.

Before and after experiences with these changes for various workflow features are illustrated below.

This feature enables a diagnostic assistant to locate the owners of a given ResourceDictionary. Whenever a change is made to a ResourceDictionary, WPF automatically finds all DynamicResource references that might be affected by the change. A diagnostic assistant such as Visual Studio’s “Edit-and-Continue” facility may want extend this to handle StaticResource references.
The first step in this process is finding the owners of the dictionary – all the objects whose `Resources` property refers to the dictionary (either directly, or indirectly via the `ResourceDictionary.MergedDictionaries`property). The new methods support this step.
The feature is implemented by three new methods on the class `System.Windows.DiagnosticsResourceDictionaryDiagnostics`, one for each of the base types that have a `Resources` property.
The feature is for use by diagnostic assistants and not by production applications. The methods return an empty enumerable unless VisualDiagnostics are enabled and the ENABLE_XAML_DIAGNOSTICS_SOURCE_INFO environment variable is set.

The feature is implemented by a new event on the class `System.Windows.DiagnosticsResourceDictionaryDiagnostics`.
This event is raised whenever the runtime resolves a StaticResource reference. The event args describe the resolution, indicating the object and property that host the StaticResource reference, and the ResourceDictionary and key used for the resolution.
The feature is for use by diagnostic assistants, not by production applications. The event is not raised (and its `add` method is ignored) unless VisualDiagnostics are enabled and the ENABLE_XAML_DIAGNOSTICS_SOURCE_INFO environment variable is set.

Please try out these improvements in the .NET Framework and let us know what you think. Please share your feedback in the comments below or on GitHub.