In our previous blog post announcing F# 4.1 and a release of the Visual F# Tools, we mentioned that a new release model for the Visual F# tools would be coming soon.

That time is now.

To recap, nightly builds of the tools are successful builds of the latest master branch of the tools, after having been run through our Continuous Integration system successfully. These will include new features, bug fixes, and improvements to existing features that will eventually make their way into a forthcoming Visual Studio update or release.

For VS 2017 RTW, it is highly recommended that you install the latest nightly. There have been a number of bug fixes, performance improvements, and new features that make the overall experience better than what was made available at the VS 2017 release.

There are a few ways you can get nightly builds. Note that this will only install the Visual F# IDE tools. It will not install nightly versions of the F# compiler, FSI, or FSharp.Core.

This is the recommended approach. The following steps will allow you to configure Extensions and Updates to point to the Visual F# Tools nightly feed. When a new nightly VSIX is published, you will get a notification in Visual Studio. 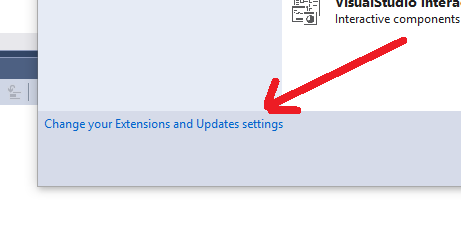 It may take a few minutes for VS to refresh the feed, depending on your machine. Once that has happened, you can open Tools -> Extensions and Updates and notice that there is an update to the Visual F# tools!

If you don’t wish to configure Visual Studio to check for updates to the nightly builds, you can always install a given nightly VSIX manually. You can also use this method to access a particular nightly VSIX.

This may be helpful if your code worked fine with a previous nightly build, but was broken in the latest one.

Uninstalling Nightly Builds to Revert to a Release Build

This will uninstall your nightly build. This will automatically bring you back to the latest release build of the Visual F# Tools that you have installed.

We’re really excited to have nightly builds for the Visual F# Tools. We encourage you to try them out and provide feedback, especially on new features. You can track any progress for a given feature, bug, or improvement on the Visual F# Github repository.

Thanks! – The Visual F# Team

Five Visual Studio 2017 Extensions for Web Developers
You’ve downloaded and installed Visual Studio 2017, and it’s a great improvement over previous versions.  Now what?  How can you make your web development ...

Jeffrey Fritz
March 21, 2017
1 comment
The week in .NET – Happy birthday .NET with Mads Torgersen, Coypu
Previous posts: On .NET This week, we'll have Sidarth Gupta and Hong-Seok Kim from Samsung on the show to talk about their Tizen OS and its support for...