In Visual Studio 2015 Update 2, we added support to the Debug Installed App Package dialog for:

Note that attach to process is not currently supported for Xbox or HoloLens, but we hope to add it in a future release. 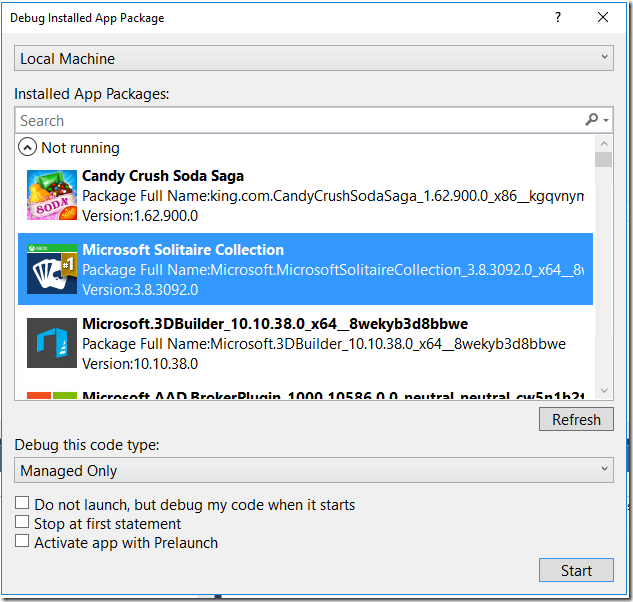 To get the list of apps to appear that you have installed on your target device (Xbox, HoloLens, or IoT), you need to first select that device. Change the selection drop down from “Local Machine” to “Remote Machine”.

In the Remote Connections dialog that opens, enter the “Address” of your device, and make sure the Authentication Mode is set to “Universal (Unencrypted Protocol)”. When you press Select, we will query your device for all of the applications installed and then display them in the Debug Installed App Package dialog.

For IoT devices, you can attach to an already running process by selecting that app from the “Running” list and then clicking the “Attach” button at the bottom on the dialog. When you select an application to debug and press either “Attach” or “Start”, we will deploy the remote debugger to the device so you can start debugging. This may take a little bit of time and you will see a message for “Starting remote debugger” while this is happening. Note that when connecting to a remote Desktop machine you will still need to manually install and start the remote debugger before Visual Studio can connect to it.

The Debug Installed App Package dialog also lets you debug Desktop UWP apps that are “Running” or “Not Running”. So now you can use this dialog to attach to “Running” desktop UWP apps to get a nice view of exactly which app you are selecting rather than just a process name like you get from the Attach to Process dialog.

In a future release, we plan to distinguish already “Running” apps for Xbox and HoloLens devices to enable attaching to running applications. Please let us know if you have any questions in the comments section below, using the Send Feedback feature in Visual Studio, or through Twitter.