In the 3 months since we went public with the service at //build/, we’ve pushed over a dozen updates to address bugs that customers have reported or we’ve witnessed in production. This update, however, is the first time you’ll see significant new functionality in the service. We continue to iterate on new capabilities for TFS 11 and will frequently update the Team Foundation Preview Service with that functionality.

So, without further ado, here’s a top hits list of what’s coming!

Navigation Updates
As we’ve used the preview and gotten feedback from you, we’ve learned several things. First, the top level navigation in our web UI was confusing. Here’s what it looked like and some of the conclusions we reached.

1) The two level navigation framework with project/team as one horizontal and activity as another is hard to follow due to the lack of chrome and the dynamically changing list of options.

2) The numerous ways to end up in administrative mode and the subtlety in the UI between the different modes caused people to get lost.

3) The most common tasks were too many clicks away.

In response to this, we’ve redone the navigation model to add a bit more style, change the project/team selection to a drop down, rework administration mode and more. We’ve also fleshed out the hubs (like Source) and improved the navigation for them. We think the result is visually appealing, easier to use, and requires less navigation.

Richer Homepages
We’ve enhanced the homepages you get for teams and team projects to make them more interactive and intuitive. You’ll now get visualizations of project status such as team capacity and burndown for the current iteration. You can also mark work item queries, build definitions, and source control folders as “Team Favorites”. Each team favorite appears as a tile on the home page representing the count of work items, the build status, or the count of recent check-ins. Simplified Web UI for Small Teams
TFS 11 introduces a new first class concept of a “team.” Your team project can be decomposed into a set of “teams,” each with their own backlog, taskboard, favorites, etc. The current web UI delineates the web experience for team projects and teams. We know, however, that many of our users work on single-team projects where this distinction is unnecessary. To simplify things, we’ve collapsed the team project and team pages for those users. If your team project is just one team, you won’t need to switch between multiple pages.

Performance
Since the launch at //build/ we’ve spent much time analyzing performance, focusing particularly on making the Agile project management features (product backlog, sprint planning and taskboard) even snappier. On our large dogfood server, I’ve seen response times for some of those pages drop by 75%. Between that and the plethora of async UI, the product really feels much more responsive.

E-mail Notifications
We’ve had a lot of folks asking when e-mail notifications will be turned on. It’s coming in this release. As a user, you’ll simply provide an e-mail address and setup notifications to start receiving them. You can also subscribe your entire team to a notification if you want to make sure that everybody receives certain alerts.

To get started, take a look at your profile settings and make sure you’ve got a legitimate e-mail address specified. Along with enabling email notifications, we’ve implemented a new UI for managing subscriptions. It’s way better than TFS 2010 and even better than the TFS 2010 notification power tool.  There’s a “basic” UI for the most common alerts that I want to sign up for: 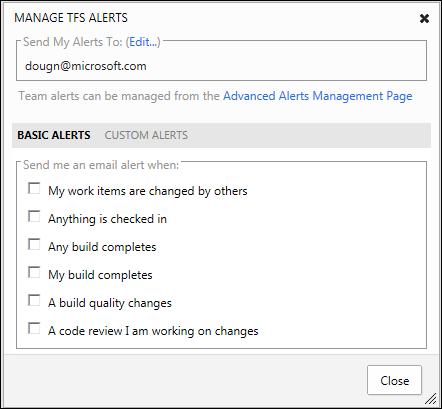 And an “advanced” UI with lots of cool capabilities like expanded notification criteria, a query builder for very flexible alert definition, the ability to subscribe an entire team to an alert, and (assuming I’m an admin) the ability to manage all of the alerts in the system. All in all, it’s a much improved experience for notifications. Forecast Lines
We’ve added a cool feature to the product backlog that will project where your iteration boundaries are likely to fall based on your team’s velocity and the estimates on your product backlog items. You can toggle it on and off from the menu above the backlog, and you can customize the velocity used to make projections. In-Tile Taskboard Editing
On the taskboard, you can now edit the “assigned to” and “remaining work” field on the work item tiles rather than double-clicking them to open the entire work item form. This can make routine updates much easier in your daily standup. We hope you’re enjoying using the Team Foundation Service and we truly appreciate all of the great feedback you’ve shared with us thus far. We’re confident that these changes will make the experience even better. If you haven’t used the service yet, we invite you to sign up at http://tfspreview.com and take it for a drive. Signing up requires an invitation code, but keep an eye on Brian Harry’s blog for a new code to be released after our servicing interval. If you miss that opportunity, you can request one at http://tfspreview.com or get one from a friend who already has an account.

We’re anxious to hear even more from you so please let us know how we are doing. You can reach us through our user voice site, through Microsoft Connect, or this blog. We’re always listening.

Interested in Agile Adoption across different industries and geographies?
One of the pioneers of the application quality ecosystem, Theresa Lanowitz, has founded Voke – a company focused Application Lifecycle virtualization and ...

Charles Sterling December 9, 2011
0 comment
ALM Summit 2011 Content Now Live and available
Working with MSDN and Channel9, the ALM Summit folks have posted all Session the content at: https://channel9.msdn.com/events/alm-summit/2011 If you are looking for ...