I have had a couple of people ask me about these new downloads appearing in MSDN downloads simply called something like: CTP of Quarterly Update for Visual Studio 2012 (x86) – (English).

Unfortunately these downloads contained no description other than:

“Statement of Support: This release has not been subject to final verification and validation, and is not intended to be run on production machines.”*

As Dave Lubash and Brian Harry posted both Visual Studio and Team Foundation Server will shipping new features every quarter(!)…

In addition to these production quality updates being released quarterly we will be releasing CTP quality updates with new features EVERY THREE WEEKS(!!)** -to enable you to look at these features and give us feedback.

Going forward we will do a better job of letting you know what is in these builds but at a high level the Sept updates contain: 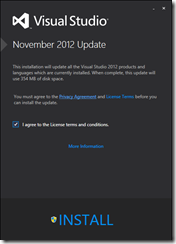 (For more detailed information on these features please see: http://blogs.msdn.com/b/bharry/archive/2012/09/12/visual-studio-update-this-fall.aspx)

If you do run into issues please let use know!

How to Provide Feedback on this Release.  Feedback is an important part of this process. To supply feedback, please use the Visual Studio 2012 feedback tool, which can be located here. The feedback tool:

Please note: as this is a Technology Preview, it is NOT meant to be run on production workstations or servers.  The testing of these CTPs is not as exhaustive and complete as the testing for the release product.  The recommended approach for upgrading Visual Studio on developer workstations is installing the latest Visual Studio Update 1 CTP on top of the RTM or a previous CTP build.   NOTE: since setup is updating the files during these updates there is NOT a “downgrade” path to get back to a previous release.

**The reason for every three weeks is so the scenario teams can get feedback on their last sprint.