The feature can dramatically reduce the total time taken to execute a suite of tests. To get started, install the framework and adapter from NuGet. If you are already using MSTest V2, then upgrade to this version.

Try out the sample on GitHub. The GitHub page has details, but here are the results with that sample (YMMV, of course): 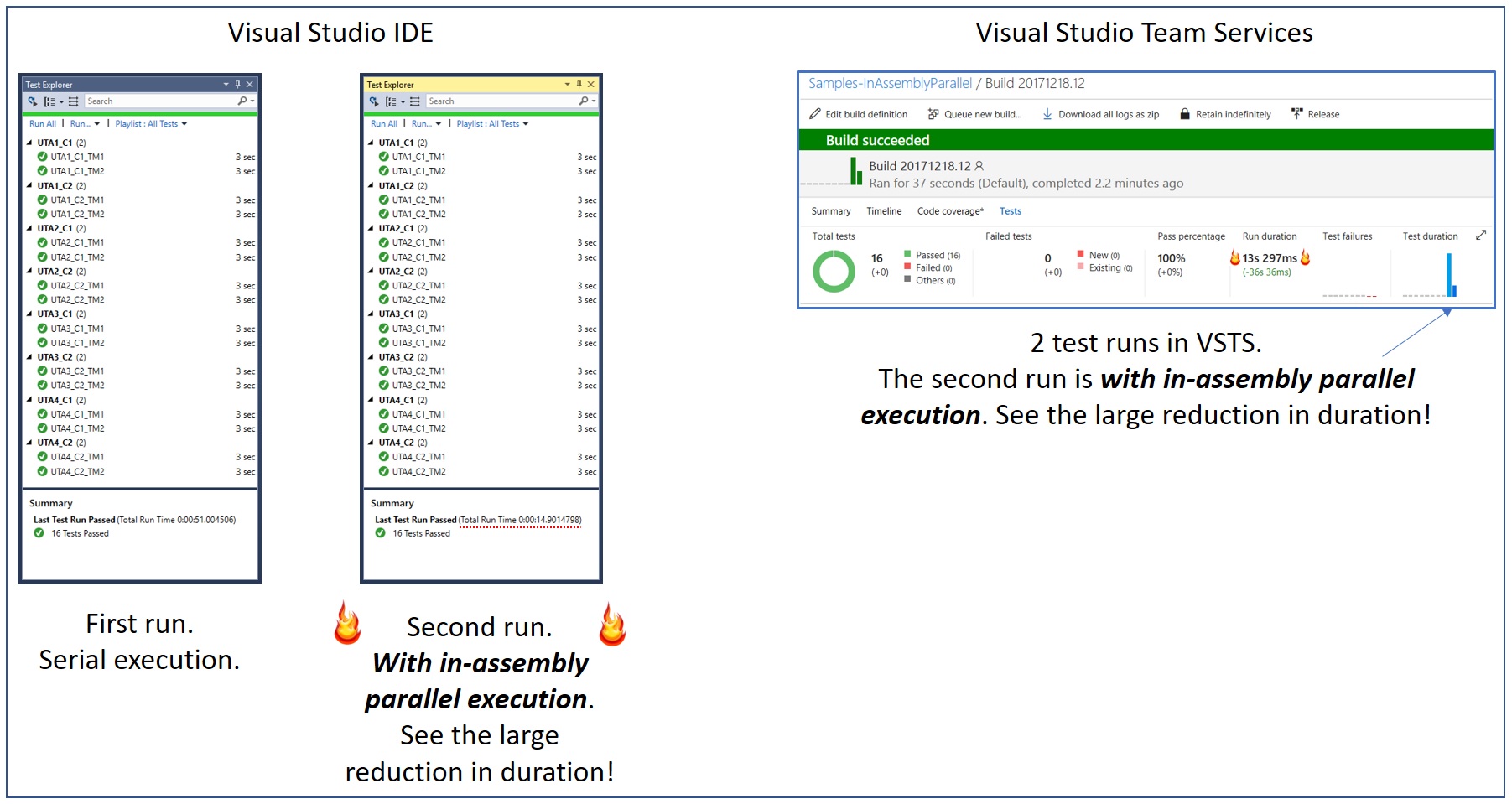 Motivation The key motivation is to complete the execution of a suite of tests, within a single container, faster.

Coarse-grained process-parallelization is already supported by vstest. That works by launching test execution on each available core as a distinct process, and handing it a container worth of tests (assembly, DLL, or relevant artifact containing the tests to execute) to execute. The unit of isolation is a process. The unit of scheduling is a test container. The tests within the container were executed in serial.

Requirements “IAP” is intended to meet the following requirements: (1) Easy onboarding – make it possible to enable “IAP” for existing MSTest V2 code. For e.g. there might be 10s of 100s of test projects participating in a test run – insisting that all of them make changes to their source code to enable parallelism is a barrier to onboarding the feature. (2) Fine grained control per assembly – there might still be certain assemblies, or test classes or test methods within the assembly, that might not be parallel-ready. Make it possible for such artifacts to opt-out. Conversely, there might be only a few assemblies that want to opt-in – that should also be made possible. (3) Override – “IAP” will have an impact on testcase-level data collectors. Since test execution will be in parallel, the start/end events marking the execution of a particular test might get interleaved with those of any other test that might be executing in parallel. Therefore make it possible for a feature that requires data collection to override and disable “IAP”.

“IAP” is OFF by default. It is intentionally left to the user to ensure that the tests are ready to be executed in parallel before enabling “IAP” – some kinds of tests, for e.g. functional tests, might not be suitable for “IAP”.

Approach The simplest way to enable “IAP” is globally for all MSTest V2 test assemblies using a .runsettings file as follows:

This is as if every assembly were annotated with the following: [assembly: Parallelize(Workers = 4, Scope = ExecutionScope.ClassLevel)]

For each assembly then, parallel execution is realized by spawning the appropriate number of worker threads (4) on which to execute tests at the specified scope.

There are 3 scopes of parallelization: (1) ClassLevel – each thread executes a TestClass worth of tests. Within the TestClass, the test methods execute serially. This is the default – tests within a class might have interdependency, and we don’t want to be too aggressive. (2) MethodLevel – each thread executes a TestMethod. (3) Custom – the user can provide a plugin implementing the required execution semantics. This is presently not yet supported but mentioned because – like all of MSTest V2 – we have designed the feature with extensiblity in mind.

The number of worker threads to spawn can be set using the Workers parameter whose values can be as follows: 0 – Auto configure; use as many threads as possible based on CPU and core count. n – The number (integer) ‘n’ of threads to spawn to executes tests.

Conditioning “IAP” – settings waterfall As already described, “IAP” can be conditioned using the following means: (1) as annotations in source code. (2) as configuration properties via a .runsettings file. (3) by passing runsettings arguments via a command line.

(3) overrides (2) which in turn overrides (1). The [DoNotParallelize()]) annotation may be applied only to source code, and hence remains unaffected by these rules – thus, even if “IAP” in conditioned via (2) or (3), specific artifacts can opt-out safely.

Parallel Composition “Efficient Execution” is a key theme for the vstest platform, and here is how “IAP” composes over the vstest runner’s process parallelization, and VSTS VSTest task’s distributed test execution: 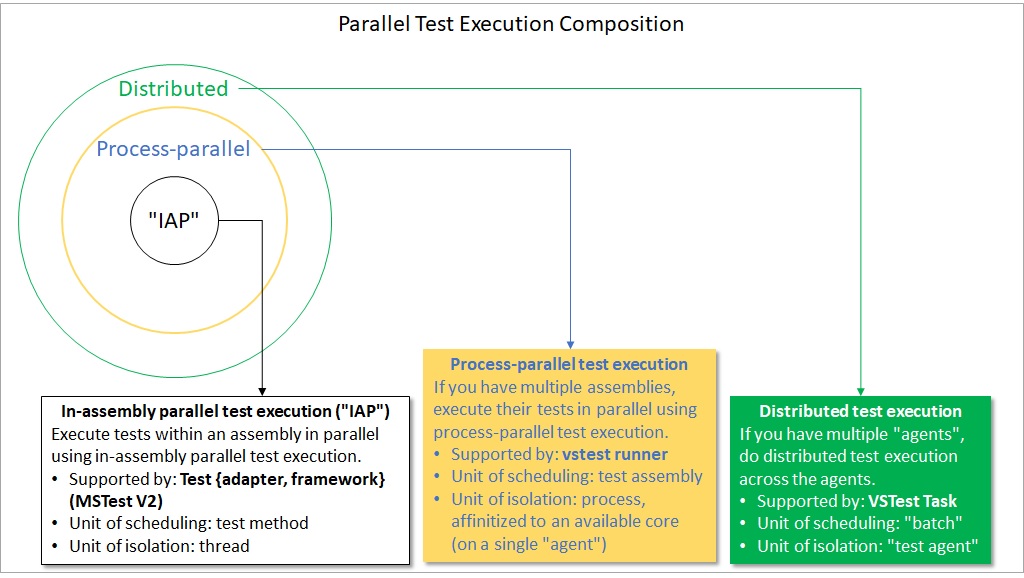 Summary and feedback So there you have it. We are eager to hear your feedback. You can provide it as comments on this post, or directly on issue on the testfx repo. We look forward to hearing from you.