If you’ve ever debugged a JavaScript Windows Store app there’s a very good chance that you accidentally ended up in either “Function code [dynamic]” or “base.js” without knowing how you got there and with no clear way to get back out. To help address this, we’ve introduced a feature called “Just My Code” (JMC) for JavaScript in Windows Store apps which is now available in Visual Studio 2013.

Those who have debugged C# or Visual Basic code in Visual Studio have likely already benefitted from this debugger feature that helps you focus on your code and abstracts the implementation details of the underlying framework. To better understand how JMC works we’ll walk through a very simple example, then discuss some of the finer points of how it behaves, and finally I’ll show you how you can customize the behavior.

Why Just My Code

To start, I’ll demonstrate the behavior when Just My Code is disabled. To this I’ll create a new JavaScript Windows Store Blank app called App1. Then inside the activated event handler I’ll add the following code snippet to try to open a file from the pictures folder (also adding the “Pictures Folder” capability to the app’s manifest)

Now what I want do to is step to the “var result = message;” line in the .done() function. So I press F10 (Step Over) twice and all of the sudden I’m in code I don’t recognize in a document titled “Function code [dynamic]”

In an effort to get back where I came from and just put a breakpoint on the line I intended to get to, I look at the Call Stack window. Here I see an incredibly long call stack with code that is mostly framework code. 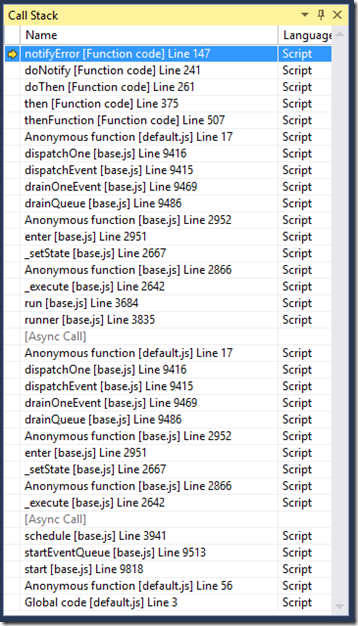 Just My Code at Work

A single press of F11 (Step Into) then lands me in the .done() function as I would expect

Also when I look at the Call Stack window I can see that all of the frames in “Function code” and base.js have been collapsed into the “[External Code]” meta-frame so I only see frames for code that I control. 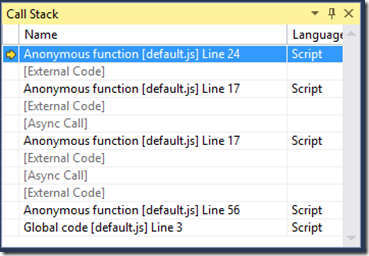 As we saw in the simple example above, Just My Code helps developers focus on their code while debugging. Now let’s dig into some of the details of how exactly Just My Code will behave when debugging.

What is My Code?

The first important thing to understand about Just My Code is what exactly is considered my code (also referred to as “user code”). When JMC is enabled, code is classified into three categories:

By default in Windows Store apps, the following code is considered to be “Library” code:

Finally in Windows Store apps, any code that is loaded into your app from an HTTP or HTTPS URI is considered “Unrelated”. All other code is considered user code. Later we’ll look at how to configure this behavior.

In the example above, we saw how JMC affects debugger stepping by keeping it in my code and the call stack filtering. Now we’ll discuss how JMC will affect other debugging behaviors.

Just My Code has the following effects on stepping behavior:

Just My Code also affects how the debugger will behave when an exception is thrown.

To see this in practice let’s look at an example. For the purpose of this example I placed the following code in a file called “notMyLibrary.min.js” so it will be considered library code by default.

Now in in my default.js file I’ll call

When I start debugging, the debugger breaks in default.js where I made this call but this time it highlights the line green instead of yellow. The green indicates that it has taken me to the last place in my code that is on the call stack which caused the exception even though the exception was not thrown in my code. The Call Stack window shows me the same thing. I can see that external code is on the call stack above my code, but the green arrow points to my code that called into the external code that resulted in the unhandled exception.

Finally breakpoint behavior is as follows: 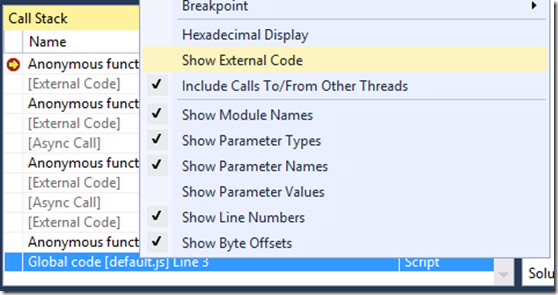 Turning Just My Code On or Off

The good news is that JMC is on by default, but it can be turned on or off by going to Tools -> Options -> Debugging and checking or unchecking the “Enable Just My Code” checkbox (this checkbox governs the behavior for .NET and C++ Just My Code as well). 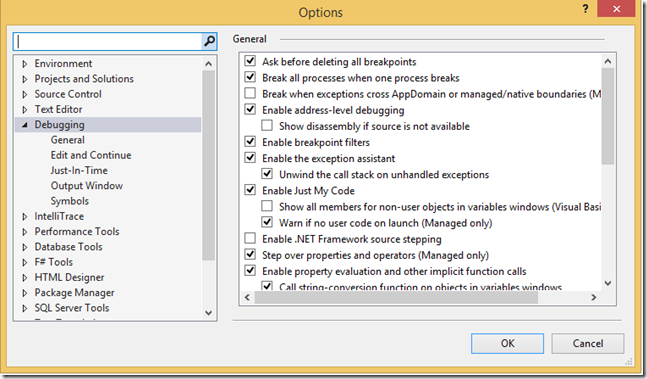 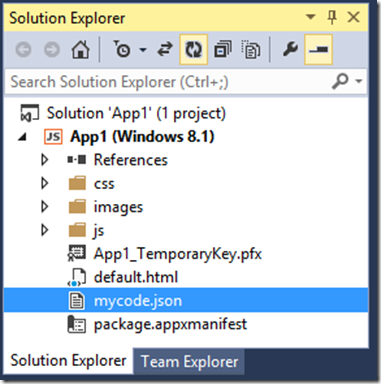 This .json file has three sections, (MyCode, Libraries, and Unrelated) that allow you to override the default behavior by manually categorizing code for that project. If you are interested the default file is located at %ProgramFiles(X86)%Microsoft Visual Studio 12.0JavaScriptJustMyCodemycode.default.wwa.json and has the following contents:

In the above file, the top three properties “Eval”, “Function”, and “ScriptBlock” are how you want that type of code to be classified, where the options are “MyCode”, “Library”, or “Unrelated”