Get the most out of your PRs with Branch Policies

Pull requests have been widely accepted as a best practice for teams using Git to peer-review code changes. Peer reviews are a great practice for discussing how to improve code and for spreading knowledge about a codebase amongst team members. Contrary to popular belief, code reviews are not particularly good at finding bugs even if that’s what developers expect from their code reviews.

So then, how can you ensure you are finding bugs before they’re introduced into your codebase while still ensuring you have the right people reviewing? Branch policies can go a long way to helping.

The first step to protecting the quality of your code base is to require peer reviews.  Direct contributions to the mainline that aren’t reviewed can result in costly build breaks and other bugs. You can protect your mainline with the branch policy to require a minimum number of reviewers.

Start on the Branches page, and find your mainline branch (e.g. master, develop). On the context menu, you’ll see an option to configure Branch policies. 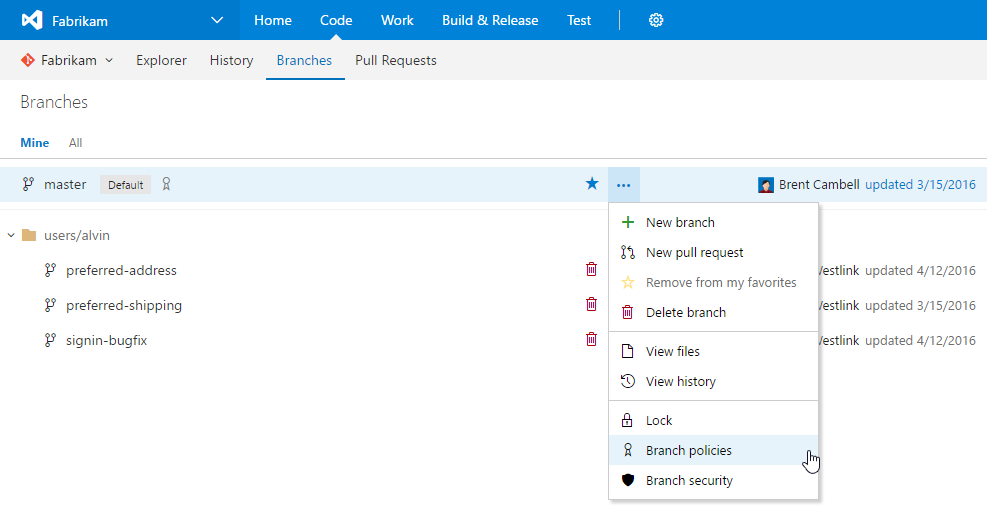 Clicking this option will take you to the policy configuration UI for the selected branch. Under the Code review requirements, check the first box to require all changes going into the branch to require a PR. You’ll be able to specify how many reviewers you want to require (2 is a good number) and whether or not developers can approve their own reviews.

Clicking save will apply the policy. Once the branch has the policy applied, you’ll see that it gets marked with a badge in the Branches page.

Anyone that tries to push directly to the branch will be blocked and will see a message informing them about the requirement to use pull requests.

To go even further with the code review requirements, you can add policies to automatically include and require approval from specific reviewers when specific files change. On the policy configuration UI, click on the Add a new path link to add a reviewer requirement for a path.

As you probably expect, you can add as many paths as needed, and any PR that changes files that are identified in policy will require signoff from all of the required reviewers.

You might also wonder about the Required and Enabled checkboxes. Required turns the list of reviewers into a suggestion, rather than a requirement. Those reviewers are still added automatically, they just won’t block completion of the PR. In practice, this is good way to encourage the right reviewers and take the burden off of the author from needing to find the best reviewers. Enabled is just a quick way to turn on and off a policy without deleting it – very useful when testing out configurations.

Reviewers are great for spreading knowledge and generally improving code, but what about preventing build breaks? That’s where the build policy comes in.

Not only does the build policy allow you to build the changes of the new code being added, it builds the result of the merge with the target before the merge is actually created. So, not only will you know that the changes build independently, you’ll know that they build on top of the latest changes in the target. I think a picture always helps explain what’s going on here. 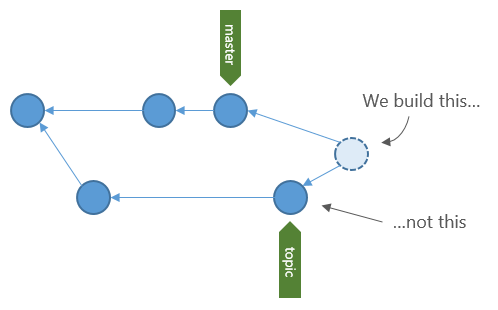 Check the box to enable the build policy. This will require that you choose an existing build definition for the changes. In most cases, the build definition you want to use for your PR builds is the same as the CI build for the protected branch. Optimizations can certainly be made, for example, omit steps to publish build drops, symbols, and other build artifacts. Running automated tests and code analysis in the PR build are also a good ideas, but it might be necessary to pare down the test suite to ensure high throughput. Focus on breadth of test coverage rather than depth.

Handling updates to the source and target branches

Once the build definition is chosen, the conditions for triggering builds must be set. Any PR into a branch protected with a build policy will trigger a build when the PR is created or the source branch is updated with new code. But what happens when the target branch changes? The build policy has several options for how to handle these additional PR updates.

Finally, the option to block PR completion can be used to make passing build a suggestion rather than a requirement for merging PRs.  This can be a good option when initially enabling the build policy (so as not to block throughput if there is a problem with the built itself).

Learn more about build policies and how to configure them in the Team Services docs.

Team Foundation Server (TFS) 15 RC2 is available and ready for production use
We have now released TFS "15" RC2. We are using it in production internally. It is fully supported for production use. You can upgrade from TFS 2012 or newer to RC2. You ...

Buck Hodges
September 28, 2016
0 comment
Cloud-load testing service is hyper-scale ready: lessons from generating 1M concurrent user load
Every now and then we hear of a business-critical app failing during major promotional or seasonal events such as holiday sales. More often than not it turns out that the...