If you have spent time trying to make a compelling mobile version of your website you have likely hit issues with it not looking or working correctly on mobile browsers.  To help with this on Windows Phone, we’re very excited to announce that in Visual Studio 2013 Update 2 we have enabled the use of Visual Studio’s debugging and performance tools for Internet Explorer on Windows Phone 8.1.

In this post, I’ll walk you through using these new capabilities.

Before I begin it is important to note that this walkthrough requires you to have installed Visual Studio 2013 Update 2 RC.

To illustrate how to use these tools I’ll start by creating an ASP.NET MVC application in Visual Studio 2013 Update 2. 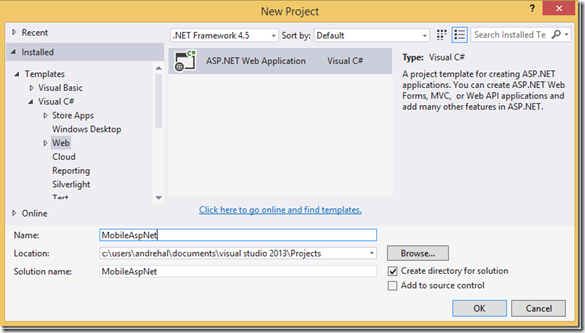 If you want to follow along, create the ASP.NET project yourself and copy and paste the code below into the the specified project files

The great thing about the ASP.NET template is it automatically generates a mobile layout of the site for me.  For the purposes of this post I’m going to make a page that animates a div when the user clicks a button to start the animation.  First I add a script file to the project’s “Scripts” folder called “SampleScriptFile.js” with the following content:

I’ll then replace the content of the “ViewsHomeIndex.cshtml” file with

To make sure this looks like I want on the phone’s browser, I’ll change the launch location to be the Windows Phone Emulator.  To do this, click the down arrow on the Start Debugging control, choose the new “Windows Phone” option, and select the first emulator “Emulator 8.1 WVGA 4 inch 512MB” option.

Next, I’ll start debugging (press F5), the emulator will start, and I will see the mobile version of my website running. 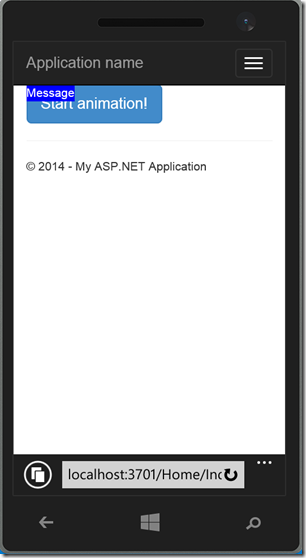 At this point I will note a few important things about the URL you may notice above, which by default uses “localhost”

After I start debugging the first thing I see is that the “Message” div is appearing on top of the “Start animation!” button.  On previous versions of Windows Phone I would have been left to trial and error to figure out what to set the top offset of the “message” div to.  However now that I have the debugging tools I can leverage the DOM Explorer (Debug –> Windows-> DOM Explorer).  In this case I used the “Select Element” feature in the top left, and clicked on the button in my application.  Then looking at the “Layout” view, I determined the message’s initial top offset should be ~97px–to get this number I summed the vertical height and offset values of the button and all of the elements above it (50+1+10+23.96+10+1=95.96) and then added 1 and rounded 96.96 to 97. 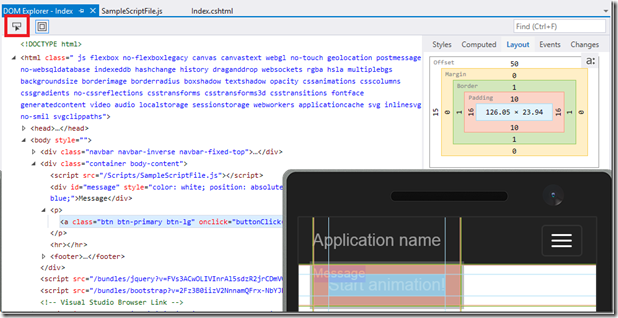 Making this change to the style of the message div

results in it appearing where I want it 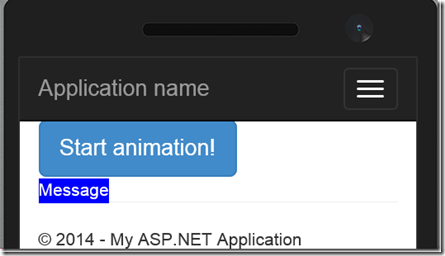 Next I want to make sure that this functions as I expect.  I click the “Start animation!” button and instantly the debugger breaks to tell me that an error occurred in my JavaScript. 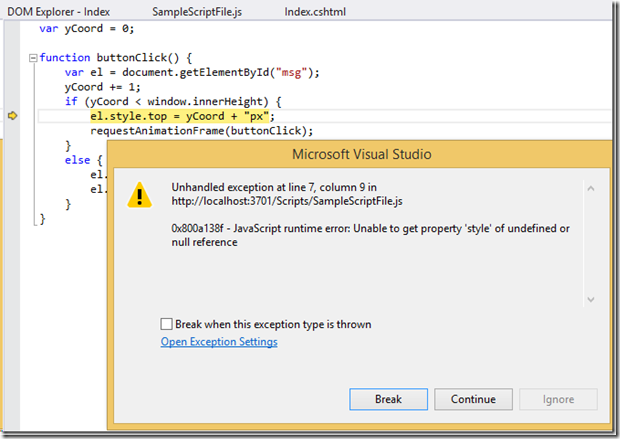 Since I am using the standard script debugger, I can see in the DataTip that el is null.

After a bit of inspection, I realize that I mistyped the Id of the element (it should be “message” not “msg”).  I’ll correct that quickly by changing the line to

Then a quick test reveals that the message div now animates to the bottom of the screen when the button is clicked.

Even though I only showed the DOM Explorer, breaking on an unhandled exception, and DataTips in this brief demo, I want to point out the that full JavaScript debugging experience is available including but not limited to the following features:

And, because it is ASP.NET, I am also debugging the server-side code as well so I can set breakpoints in the C# code (e.g. in the Index() method of “ControllersHomeController”) which will be hit when called from the phone, the same as any other ASP.NET debugging session.

Debugging Without a Visual Studio Project

In the previous part of the post I covered how to debug ASP.NET applications on Windows Phone 8.1 with F5.  However we recognize that not everyone is going to be doing ASP.NET development. So to debug web sites running anywhere and created with any backend technology we’ve added a menu option called “Debug Windows Phone Internet Explorer” (available under “Debug –> Other Debug Targets”)

That will open a dialog that allows you to select the following options: 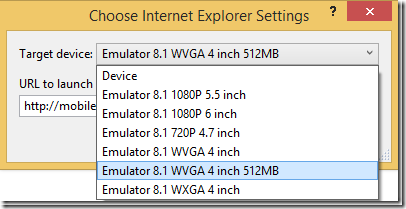 In this case I have published the ASP.NET application I created above as a Windows Azure website, I enter the URL for the Azure website version, then click start debugging.

Since I don’t have a project, in order to set breakpoints in my source code, I can open any loaded script file from the “Script Documents” node in Solution Explorer. …and then the experience is similar as if I had a project open!

When running my application under the debugger I noticed that the animation wasn’t performing as smoothly as I would prefer.  Before I jump to any conclusions, there are two important things to note about evaluating performance. 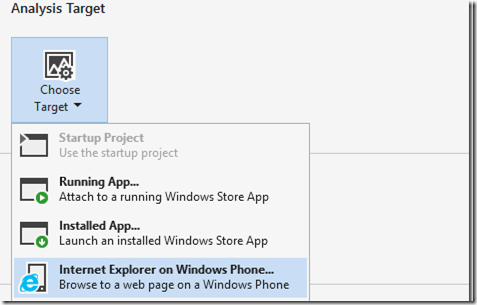 Enter the URL you wish to profile just as we did for debugging without a project.

I can now see the following performance tools available to me for Internet Explorer on the phone: 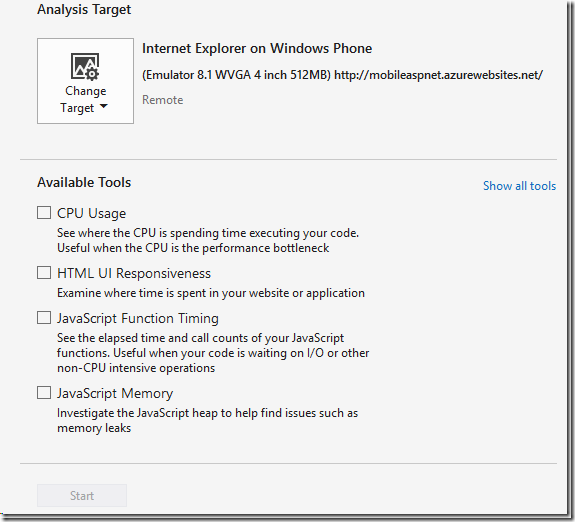 For the purposes of this example, I’ll select CPU Usage and HTML UI Responsiveness tools together, and then press “Start”.  Internet Explorer on the phone will be launched and navigate to the URL I specified.  I now see the CPU utilization graph updating live, and a message telling me that data is being collected. 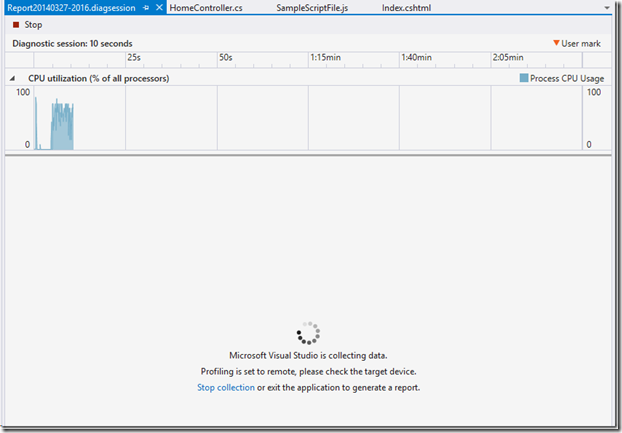 After clicking the button I can see that the jittery animation reproduces as I expect, so next I’ll click the “Stop collection” link on the collection page.

I’m now presented with the report showing me the CPU consumption and frame rate of the application where I can see that it does sometimes randomly drop from 60 fps to ~30 fps on the “Visual Throughput (FPS)” graph. Since all of the available tools are well covered in the dedicated blog posts linked above I will not spend time digging into the reports here.  However, after looking at the report above I see that every style update in script code causes a Paint and a Layout.  After a bit of research I tweak the animation to use a CSS transform in conjunction with a CSS transition to animate the message box, which will do the calculations directly on the GPU.  This gives me the following “SampleScriptFile.js”

To validate this behaves as I expect it to, I run the profiling tools again, and can see that there are significantly fewer events occurring between starting the animation and it ending. (The single set of events corresponds to when I updated the div’s style to add the transition and transform properties.) Note: The emulator does not have direct access to the development machine’s GPU, so it simulates the behavior on the CPU. If you are trying this on the emulator rather than the device you will not see the events appear in the HTML UI Responsiveness timeline, but you will see the CPU consumption of the site remain high in the CPU utilization graph. Also due to this, the physical device will likely perform better than the emulator in this case

In this post we quickly walked through how to debug and profile web applications running in Internet Explorer on Windows Phone 8.1 devices.  While we looked at simple examples, I hope that you can see how to apply these new capabilities to your web applications.