We are excited to announce that the dependency tracking feature for Delivery Plans 2.0 is complete and the Team limit has been increased to 15! We’ve also addressed some bugs and issues so please keep the feedback coming.

Here are examples of the dependency panel… 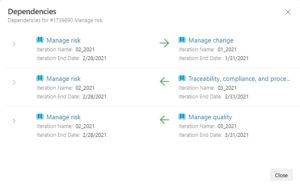 Dependencies between work items are visualized with arrow headed lines between the respective work items. Multiple dependencies will display with multiple lines. A red colored line indicates a problem. Just click on the card to activate the dependency lines. Here is an example of a single dependency.

Here’s an example of a dependency with an issue…

Here’s an example of multiple dependencies…

When there is an issue the line color is red and you can hover over it to get the specific dependency that has an issue.

We’ll continue addressing feedback and fixing bugs. We plan to GA Delivery Plans 2.0 by the end of March.

AzureFunBytes – Terraform and Azure
Azure Cloud Advocate Zachary Deptawa joins me again! This time we'll dive a bit deeper into Terraform! Zachary has a ton more information to share about how to deploy ...