Defining variables while creating a Release in RM

We have had a number of customers ask us how they can create / define variables while creating a Release, similar to how they can do this while queueing a Build.  So I thought I would write a quick blog that explains how this can be done.

For reference, below is the screenshot of how this can be achieved while queueing a build: In RM, let say that we have a Release Definition called MyReleaseDefinition, and we want to change the value of variable a1 to “foo2” for a particular release. This can be achieved by creating and editing a Draft Release using the steps below:

1. Create the release in Draft mode. 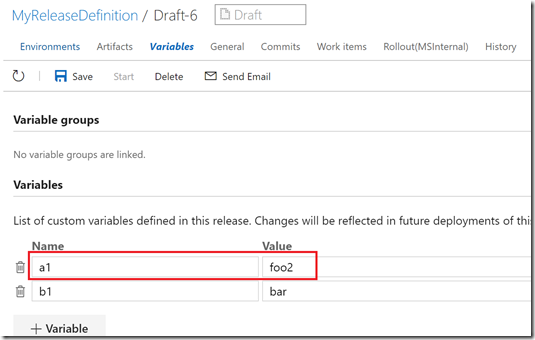 You can also do a whole bunch of other operations on the release in Draft mode e.g. add other variables, change task parameters, etc.

3. Save the Draft release

Using Open Source Components? Using TFS?
Back in March, I wrote about the WhiteSource Bolt extension for VSTS. This is a fantastic way to automate security checks for open source vulnerabilities in the release ...