On April 24th, Brian announced the availability of Team Project Rename in Visual Studio Online. This is now available in Team Foundation Server 2015 RC as well. The good news is that** CodeLens just works after you rename a project**. When you re-open a file after renaming its team project, you will see all its history – including the changes made before the rename .

**NOTE****: If you need to rename a project, I recommend that you read the MSDN article *Rename a Team Project in its entirety and follow all the guidelines there. * 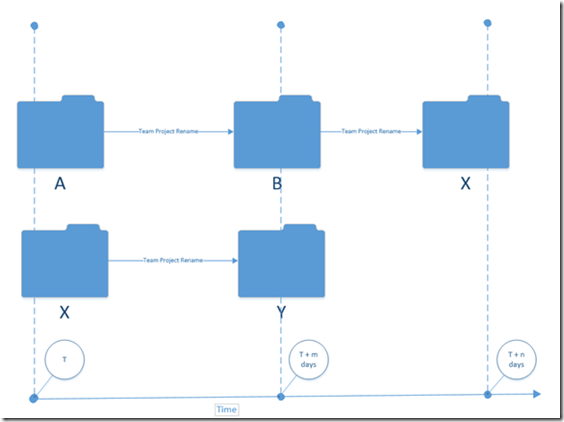 CodeLens will not be able to correctly determine the indicators for files in team project X because there is CodeLens data stored for the original project named X and the newly renamed project X (which was originally named A). In addition, CodeLens will not be able to determine the correct indicators for files in project Y because these files have references to the original project X.

In such cases, you must re-index the data in the new team projects X **and **Y. If you are  using TFS, you can do this with the TFSConfig CodeIndex /reindexAll command. If you are working in Visual Studio Online, send an email request including your account name to us at VSOCodeLens@microsoft.com and we will re-index your data.

By the way, if you rename your newly renamed project X back to A (perhaps you inadvertently changed the name and you want to go back to the original name) there is no problem. CodeLens will show the correct data.

As always, we are interested in hearing your comments on this feature. Try it out and let us know. You can send us feedback using Visual Studio’s Send a Smile feature. You can also log your feature suggestions on the Visual Studio User Voice site.

Using Fiddler to monitor network traffic from the VS Emulator for Android
In today’s cloud-connected world, it’s hard to find an app that doesn’t make use of an internet connection in some way or another. Whether you’re collecting ...