In just the last month i have been asked three times for a case study or examples of how to test Java based systems using Microsoft Test Manager.

Knowing one of the ALM MVPs, Marcel de Vries, is finishing up a very large Java project i reached out to him to find out how he just accomplished this.

Despite the fact he was super busy with the Visual Studio launch in the Netherlands and Visual Studio Live in Florida he still managed to pen a blog post for the ALM Blog.

In my daily work as an ALM consultant I get interesting challenges once in a while to help out teams implement ALM with team Foundation Server. This was also the case when I was asked to help SNS real insurance with their implementation of TFS across all their software development teams.

SNS Reaal Insurance had selected Team Foundation Server as their primary ALM toolset. For them the most important they reason selected TFS is that it provides a central repository for all disciplines involved in the software lifecycle including the feedback loop back from production back to the development team. They had already decided to move to a more Agile and Lean approach of developing software, but their expanding list of single purpose development tools without integration or holistic view of the over all development lifecycle, was becoming a bigger problem each day.

The following statement described what we got asked to do:

Team foundation Server was selected as the tool to support all teams. The first team we were asked to onboard on Team foundation server was a team that used a set of common off the shelve products used for the basis of the SNS REAAL pension fund. This is a common strategy these days, with more and more companies moving away from building all their software custom for their business.  With this strategy most of the work involves integrating in their IT landscape with all the required external interfaces. The team was about 60 people in size and they asked us to help them in three areas:

The posed an interesting question: Since the off the shelve products they selected was a Java Based solution how best to integrate them?

So the big question we got to solve was, how can we build a robust test automation layer, using tools that integrate with TFS and still enable us to test Java based User interfaces?

After consulting with the Microsoft Product team, we got in touch with a German based company called Frog Logic. Frog Logic provides a whole suite of test tools, including tools to test java User Interfaces. While there are many other tools in the market place that can just test Java Based UI’s this tool was special as they offered build integration of their test tools with TFS out of the box!

If you look at what Frog Logic has to offer, then one of the most important things that helped us, was the ability to write the tests in the IDE the Java developers were already using, called Eclipse. Froglogic integrates with both Eclipse, and the TFS tools. Meaning that all scripts we wrote to automate the tests, can be placed under version control and the software check-in would automatically integrate with work items. This would keep our end-to-end traceability in place AND solve our problem of testing Java Based applications.

In Figure 1, you can see that the tools in the eclipse IDE contains Java Script based automation scripts that we can check in and out of TFS. The fact we choose Java Script, is because that is more common these days to use and many developers know how to write in Java Script. We could also have chosen for other languages, since frog logic support a whole range of non-proprietary scripting languages like Perl, Ruby, python and Java Script. 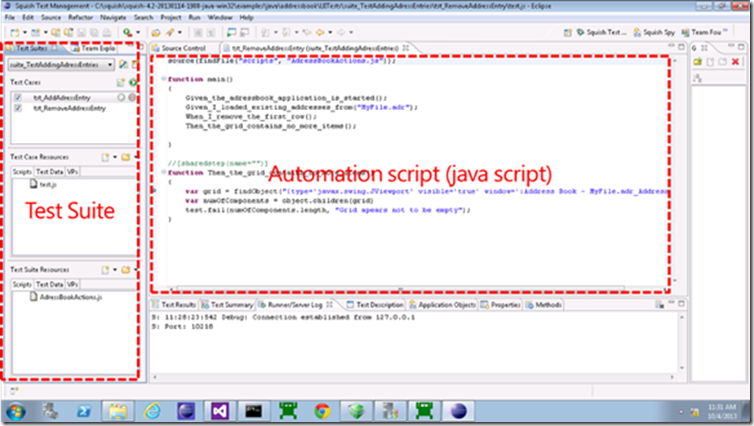 Once you have developed you test suites in Eclipse, you can create the test cases you want to run in Microsoft Test Manager (MTM). These test cases will help you track the tests against your requirements, or stories that are delivered by the development teams. The MTM tooling will keep track of the test cases, enable you to schedule test runs and gather test evidence on how tests ran and what the results were of those test runs. MTM enables e.g. video capture during your test runs, so when something fails, you can review later what went wrong and it solves part of the non repro issue many developer and testers encounter each day. 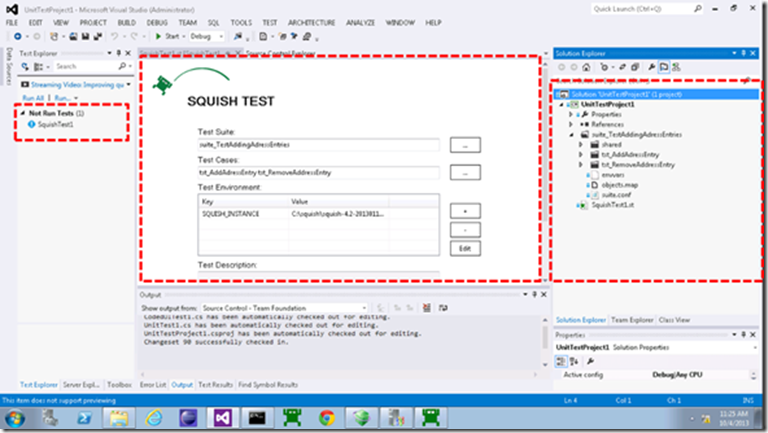 In figure 3, you can see that the test automation in registered with the test case, and this now enables us to run the automated test using MTM and the standard Lab infrastructure. This means we just registered a physical environment in lab management, and this enabled us to have the functional testers run the automated suites as part of their daily test runs. 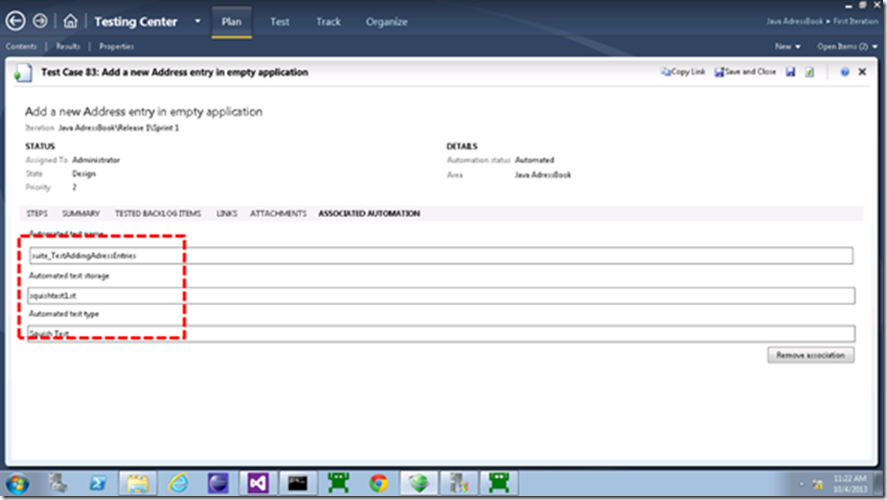 You can take it one additional step further and that is integrate it in the team build environment. This means you define a lab management build, where you select the environment, the test plan and the build you want to test (e.g. latest build of the product) and then the build can be scheduled to run each night or even at each check in if you want.

As you can see the froglogic tooling can help you solve a lot of the problem of automating tests that need to test different technologies including Java. They have more solutions in place, but the one we started to use at SNS REAAL was the Java Desktop testing tools Squish by froglogic.

The most important learning for our team was that the test automation need could have been solved many different ways, but we needed a strategy that offered a holistic view of the development process, integration with TFS and solved our main goals. We could have picked many of the other tools that enable Java application testing, but the fact froglogic enabled seamless integration and reporting to out of the box, was for us very important. Now we can leverage TFS for the one and only point of truth of our development process rather than dozens of the other single purpose and siloed tools.

I hope this write-up gives you an impression on how we solved a common problems haunting many large development teams and how froglogic provided us with a solution that fully integrates with Team Foundation Server giving the developers SNS REAAL a fully integrated end to end solution.

Charles Sterling November 22, 2013
0 comment
Just My Code for ASP.NET in Visual Studio 2013
Posting this on behalf of Patrick Nelson who is a developer on the Visual Studio Debugger team, and also thanks to Rob Paveza for his help with both of our post regarding