This article provides a solution for running Azure DevOps agents (Build/Release agents) on Windows Server Core based containers, hosted on Azure Container Instances (ACI). A solution like this might be useful, when the default Microsoft-hosted agents don’t fit your requirements, and you don’t prefer using “traditional” IaaS VMs for running your self-hosted agents.

One of our customers decided to use Azure DevOps as their primary automation tool for Azure workloads. To achieve this, the following components are needed:

As this customer wanted to have full control over the agent machines, had concerns about using a shared, multi-tenant platform for this purpose, and was afraid of hitting any of the technical limitations of the platform-provided agents, the default choice of using Microsoft-hosted agents fell quickly into the no-go category.

To fulfill these requirements, namely to enable the customer to run Build/Release pipelines in a scalable, customized and highly secured environment, we clearly needed to implement a set of self-hosted agents.

As the customer prefers using PaaS services over IaaS VMs, and has strict security requirements, using the well-documented approach for deploying agents on VMs – what you would normally do – could not come into question.

Luckily, Azure offers this relatively new service, called Azure Container Instances (ACI), using which customers can run containers without managing the underlying infrastructure. As this service is now generally available (GA), it was a perfect choice for this customer.

This solution is simple, yet secure and has multiple benefits over using IaaS VM:

How does the solution work?

The solution consists of 3 scripts – all have to be placed to the same folder:

The wrapper script can be invoked from any location (including Azure Cloud Shell), that has the required components installed (see the prerequisites below).

The wrapper script copies the internal, container configuration script to a publicly available storage container of the requested Storage Account, it creates a new Resource Group (if one doesn’t exist with the provided name), removes any pre-existing ACI containers with the same name, within the same Resource Group, then creates new ACI container instance(s) based on the provided names and invokes the container configuration script inside the container(s).

The container(s) are based on the latest version of the official Windows Server Core image (microsoft/windowsservercore LTSC) available on Docker Hub.

After the successful configuration, it prints the available disk space and keeps periodically checking that the “vstsagent” service is in running state. Failure of this service will cause the Container instance to be re-initialized. If this happens and the PAT token is still valid, the container will auto-heal itself. If the PAT token has already been revoked, or has been expired by this time, the container re-creation will fail.

This removal script removes the selected Azure Container Instance(s). It leaves the Resource Group (and other resources within it) intact. 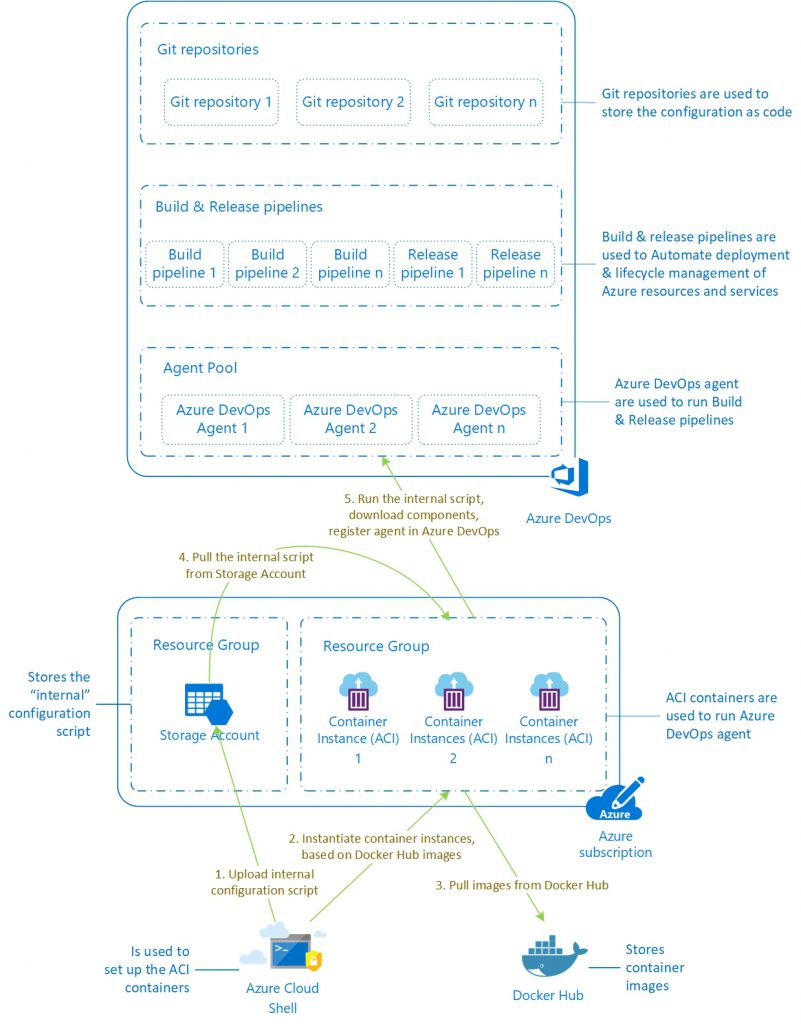 How to manage the solution’s lifecycle

You can find the GitHub repo here: https://github.com/matebarabas/azure/tree/master/scripts/AzureDevOpsAgentOnACI

Top Stories from the Microsoft DevOps Community – 2019.01.11
Welcome back Microsoft developers and DevOps practitioners; I hope you had a great new year! Me? I took some time off to recharge the batteries and I'm glad I did because — wow — even though it's just the beginning of 2019, there's already some incredible news coming out of the DevOps community.

Edward Thomson
January 11, 2019
0 comment
Team Foundation Server Security Updates
Today, we are releasing updates for a cross site scripting (XSS) vulnerability and an issue where in some instances task groups may incorrectly show variables that are ...