In this post we outline the basics of setting up an X++ repository in Git as well as a YAML-based build pipeline which executes against this repository.

Git is an increasingly popular version control system which sees broad use within the Commercial Software Engineering (CSE) organization at Microsoft. Dynamics 365 for Finance and Operations (D365 F&O) projects have deployed with Team Foundation Version Control (TFVC) as the default repository technology for several years, and TFVC remains the default version control option for F&O development projects to this day. Given the growing developer preference toward Git, we prototyped a Git repo setup on a recent X++ development project. We are sharing our setup steps here for broader reuse.

Our primary objective for this portion of the project was to design and implement a combined X++ and C# repo which embodied the relevant CSE fundamentals outlined here.

As is sometimes the case on X++ development projects, this project had a dependency on C# code to handle some integration scenarios. Consequently, the repository structure outlined in this post reflects the unique scenario where we both needed to have source access to the C# code, and we wanted to be able to build it alongside the X++ code every time we created a new software deployable package. This guidance can still be used to set up an X++-only repository.

Because we chose to focus on current trends, there are several important areas that we did not explore and are not covered by this post, namely:

Note: It is a best practice to generate deployable packages via build pipeline versus locally generating packages on dev environments. Thus, this walkthrough outlines both repo and build pipeline setup.

We used the below structure for the project repository, which prioritizes high organization at the root level of the structure. This structure is not mandatory for managing X++ in Git and we mention it here for context only. 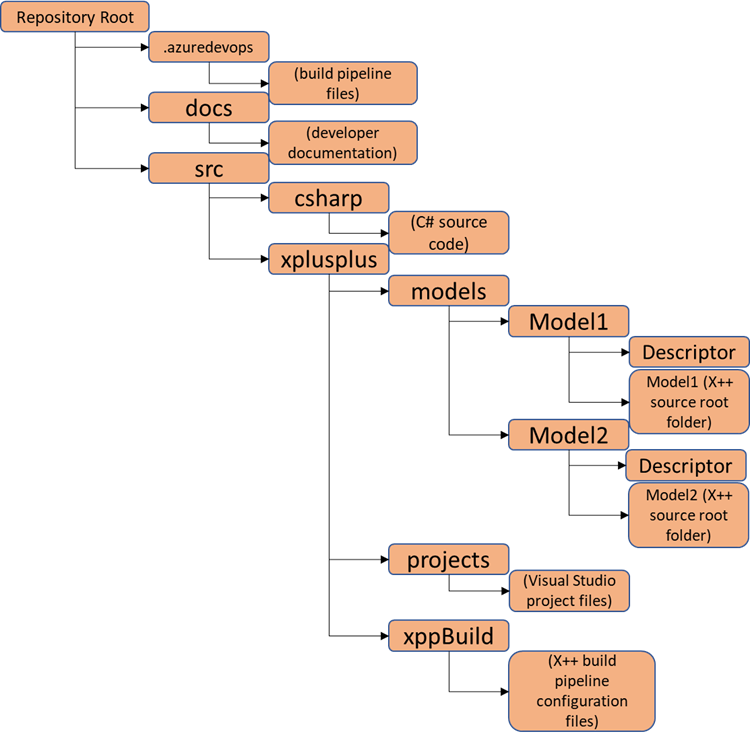 Set up the Git Repository For example, if you used all of the defaults outlined above, the command would look something like:

You can validate the links manually by navigating to the new locations starting at the AOS folder, either via File Explorer or command line. The model folder contents should look like they exist under the AOS folder.

The X++ build pipeline we created for this project uses the Microsoft-hosted agent build approach outlined here, and it is based on the sample build definitions available here.

Technically, this pipeline can be created as either a “Classic” (non-YAML) pipeline, or a YAML-based scripted pipeline; for improved modularity and maintainability, this walkthrough uses the latter approach.

The same build definition generates both packages to avoid any potential code or configuration drift between test-bound and production-bound packages.

Build pipelines are complex, and YAML-based pipelines are dependent on repository structure, so rather than provide a step-by-step walkthrough, we are providing detailed explanations along with the YAML file contents, in dependency order, as a starting point for you to build your own pipeline.

Description: Specifies the NuGet packages and versions used to set up both the compiler tools and system-standard source files (upon which the build pipeline depends to generate compiled X++ source code).

Note: As noted in the documentation on hosted build automation, these packages must be manually uploaded to an AZDO artifact feed in your own AZDO project before the references can be successfully retrieved by the build pipeline. Also, you will need to update the highlighted version numbers within your config file to match the application and platform versions you want to compile against.

Description: Specifies the AZDO artifact feed to be used for retrieval of the packages specified in packages.config. Note: You will need to update the target URL and optionally the key name to match your artifact feed.

Description: Sets up NuGet dependencies, generates a unique model version ID for the compiled result, performs a special execution of VSBuild using the X++ compiler tools and source files specified in packages.config, records the compile logs, and optionally generates a deployable package and publishes the package to the pipeline results.

Note: we added conditions to the last two steps to separate the compilation of test models from production models. While this particular pipeline does not perform any additional steps in the test job, it serves as a structural example of how test execution and package generation could be separated and fully executed in a more advanced pipeline implementation.

Description: Triggered by changes to the target branch. Collects X++ build-relevant details such as the Visual Studio solution and the location of the X++ metadata and AZDO artifact feed. Passes these details through to a job which performs the actual model compilation and, optionally, packages the results.

In this post we outlined the basics of setting up an X++ repository in Git as well as a YAML-based build pipeline which executes against this repository.

Many thanks to Sujit D’Mello for starting this work with me, Jose Rodriguez for helping me finish it, Joris de Gruyter for leading the way on many of the tools and patterns we built upon for this example, and to the X++ developer community for experimenting with many of these concepts well ahead of this post’s creation.

An Approach to Unit Testing ADX Functions
Overview Our application contains many functions that return data stored in Azure Data Explorer (ADX). We wrote these functions in Kusto Query Language (KQL) and each ...