We recently collaborated with Aveva, an industrial design and management software company. The goal for Aveva was to improve its remote rendering service and extend this technology to support an ever-growing list of platforms and devices including HoloLens. As a result of our collaboration, we built 3DToolkit, a toolkit for creating powerful cloud-based 3D experiences which stream to low-powered devices that are traditionally out of reach.

One of the key decisions we had to make was the video transport technology. After investigating different options, WebRTC emerged as the best choice for this project. WebRTC is designed to work peer-to-peer. In our case, one of the peers is a cloud server that streams video, and the other peer is a client device that might need to traverse NAT gateways and firewalls. For these cases, WebRTC APIs use STUN servers to get the IP address of the device, and TURN servers to function as relay servers. This code story will cover how we orchestrated TURN servers for cloud deployment in our work with Aveva.

There are free STUN servers available to use but maintaining TURN servers that relay video traffic is resource intensive. As part of our solution, we had to set up and maintain our own TURN servers. The challenge was to create a simple process for deployment and to find an implementation of TURN that would satisfy the following requirements:

After investigating different implementations of TURN servers that would satisfy all of the above requirements we decided to use coturn, an open source and fully spec-compliant TURN server.

To run the first simple version of TURN server that satisfies first 5 requirements, we deployed an Ubuntu virtual machine in Azure, added rules to open ports 3478 and 5349, connected to the machine remotely via SSH and ran the following commands:

Next, we created a file with the script listed below. It prints configuration information to /etc/turnserver.conf , such as listening, relay and external IPs and a reference to a self-signed certificate. It also adds credentials to the SQLite database that is running on the same server using the turnadmin command. 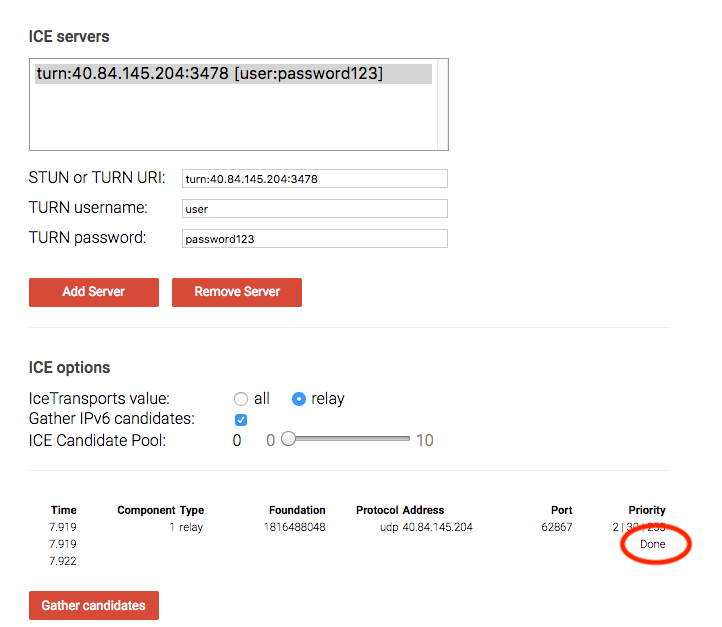 To make our server reusable and easy to deploy in any operating system and environment, we Dockerized the above scripts. This image is available in Docker Hub.

With this setup, we can run the Docker container on any Unix VM with Docker installed:

To be able to use a TURN server in a production environment, we needed it to satisfy the last four items in our requirements list. This situation leads to a much more complicated deployment process, as it requires:

We selected Azure as our hosting environment for the set of load-balanced TURN servers and have used a number of its services such as Ubuntu VM, Azure Database for PostreSQL, Azure KeyVault, and Azure Virtual Network. To automate the process of deployment to Azure, we developed scripts and ARM templates that make it possible to set up load-balanced TURN servers ready for production within 10 minutes.

The project’s GitHub page contains steps for deployment on either a Unix or Windows working environment. The main step is automated deployment via ARM template of x number of VMs and running the specified Docker container on them.

We shared a Docker image with coturn server set up the way it works for our project on Docker Hub. If you want to make modifications, you are welcome to fork the original repo on Github, create a Docker image based on it and specify it as a parameter for your deployment template.

The following screenshot gives insight into the settings that configure deployment of TURN servers.

The scripts, templates and Docker images that we created made it possible to set up a production-ready, load-balanced coturn implementation of TURN server to Azure within 10 minutes. It was proven to work at scale with a massive video transfer for our use case.  At the Aveva World Summit in October 2017, we were able to demonstrate the detailed rendering of a 400 million polygon model of an oil platform from both on-premises and Azure-based rendering services streamed into a range of devices, including HoloLens.

Everything we built for this project is open-sourced and we welcome feedback in the comments below and contributions on GitHub.

Analysing Bot to Human Hand-off Interactions
Analytics is an important aspect of any application, whether it be a mobile app, a website, or even a bot. With the recent rise of bots, more and more engineers are ...