The Fortis project is a social data ingestion, analysis, and visualization platform. Originally developed in collaboration with the United Nations Office for the Coordination of Humanitarian Affairs (UN OCHA), Fortis provides planners and scientists with tools to gain insight from social media, public websites and custom data sources.  UN OCHA mobilizes humanitarian aid for crises such as famines, epidemics, and war.

To understand crisis situations and formulate appropriate mitigations, UN OCHA needs access to tremendous amounts of data and intelligence, from a wide range of sources including newspapers, social media, and radio.

We covered the Fortis pipeline in a previous code story. Below is a brief summary of the pipeline:

A NodeJS and GraphQL services layer sends the data from Cassandra to a ReactJS dashboard.

To add radio analysis to this pipeline, we made three simplifying assumptions:

Once framed in this way, we see that we need two pieces to ingest radio into a Spark Streaming pipeline:

The following sections will cover each of these pieces.

Spark’s custom receivers are a powerful mechanism to turn APIs into real-time data sources for Spark Streaming. A custom receiver needs to implement just a few methods. For example, in Scala:

After we define our custom receiver, we can now turn its underlying data source into a Spark stream that is easy to consume via the usual high-level Spark APIs:

We make heavy use of custom receivers in the Fortis project as a simple way to turn APIs into streaming data-sources. Fortis has published packages to integrate with the Facebook API, Reddit API, Instagram API, Bing News API and RSS feeds. Similarly, the radio-to-text functionality described below is wrapped in a custom radio receiver to integrate it into our Spark pipeline.

Converting radio to text in near real-time

After solving the problem of how to integrate custom data sources into Spark, we next require a solution to convert a stream of audio, such as from an online radio broadcast, to a stream of text.

Azure Cognitive Services has been offering speech-to-text capabilities for more than 10 languages for a long time via the Bing Speech API. However, the API is based on a request-response paradigm which is not suited to our streaming use case as it would require us to buffer large audio clips in the radio receiver, send the chunks to the speech-to-text service and wait for a transcribed response. This approach would introduce latency and HTTP request overhead.

However, Azure Cognitive Services recently published a speech-to-text protocol that works via WebSockets which are well suited for a streaming scenario. We simply open a single bi-directional communication channel via a WebSocket connection and use it to continuously send audio to the speech-to-text service and receive back the transcribed results via the same channel.

How does the WebSocket speech-to-text protocol work?

After creating a Bing Speech API resource in Azure and noting the access key, we’re ready to start implementing the speech-to-text WebSocket protocol.

The full end-to-end flow is illustrated in the diagram below and each phase is described in more detail in the following sections. 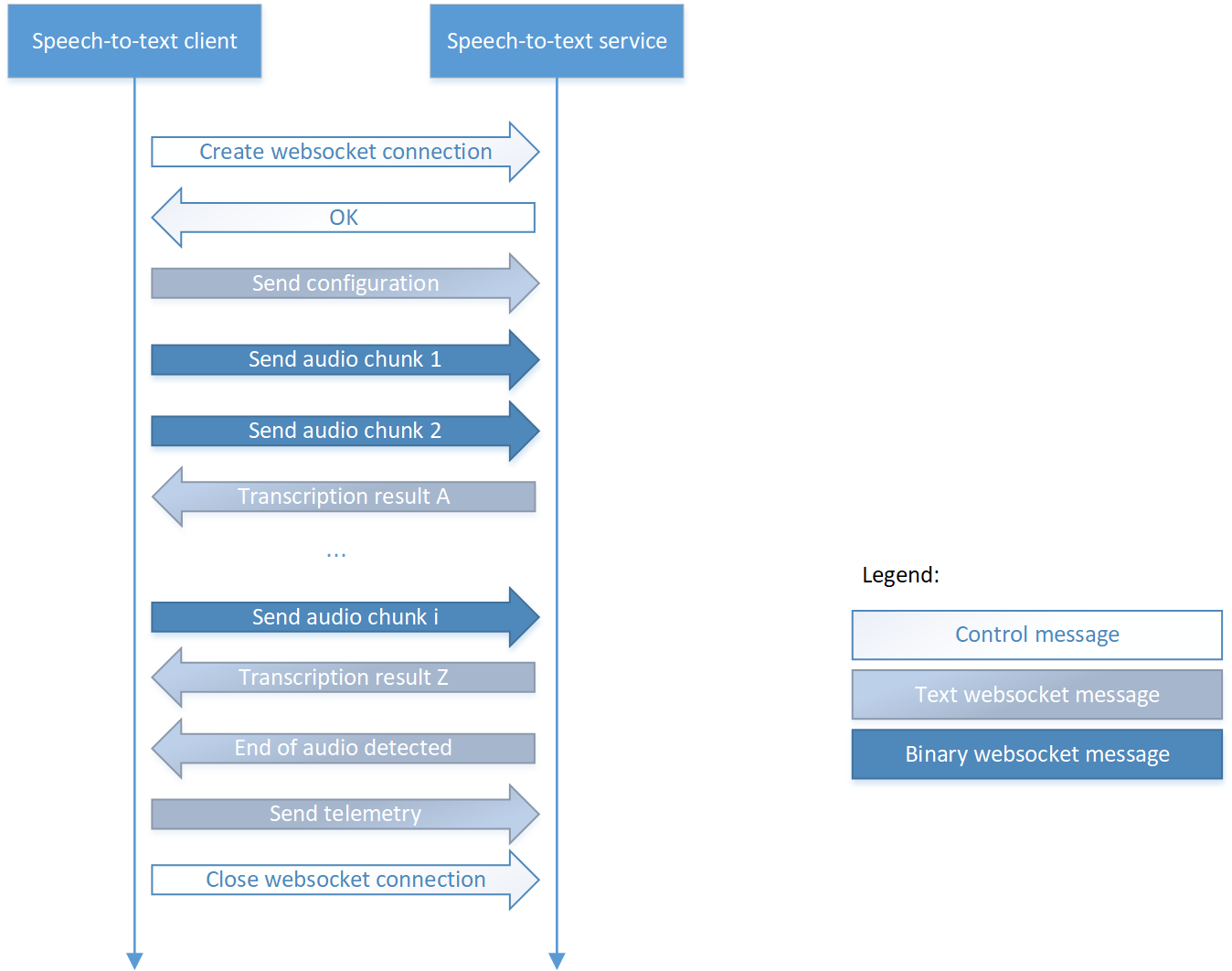 After the WebSocket connection is established, we must send additional identifying information about our client (like the operating system used, the audio source being transcribed, etc.) to the speech-to-text service via a WebSocket text message and then we’re ready to transcribe audio:

Once the client has successfully identified itself with the speech-to-text service, it can start sending chunks of audio for transcription, via binary WebSocket messages: 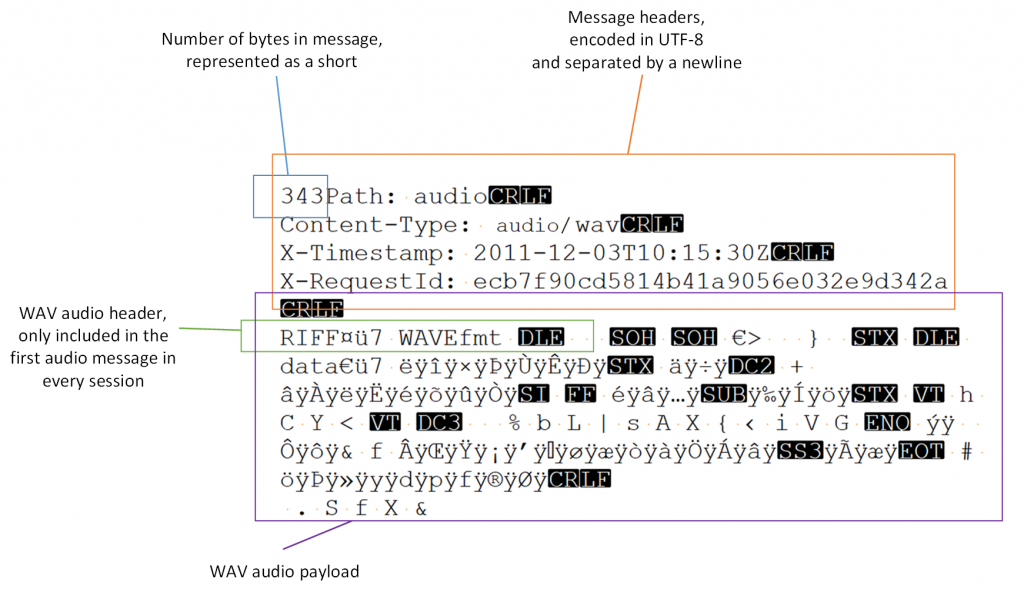 Most online radio is in MP3 rather than WAV format, making an audio format conversion step necessary for the radio input to be processed by the speech-to-text service. The Java ecosystem has a lack of great open source, permissively licensed streaming MP3 decoders; as a result, our client resorts to converting small batches of MP3 audio to WAV on disk using the javazoom converter and then resampling the WAV using the javax.sound APIs with the Tritonus plugin. Hopefully, in the future, the trip to disk will be made unnecessary by moving to a streaming or in-memory MP3 decoder.

When the client wishes to close the connection with the speech-to-text service, it must execute three steps in sequence:

Sending the connection-end telemetry is like the client-information telemetry described in Phase 1 above. The schema for the JSON payload of the message is well documented.

In many parts of the world, essential information is broadcast via traditional sources such as radio. To formulate effective crisis response plans, the United Nations Office for the Coordination of Humanitarian Affairs needs to be able to access and analyze these data sources in a timely manner.

To solve this problem, we created a Java client for the Azure Cognitive Services speech-to-text WebSocket protocol. We then fed the transcribed radio into a pipeline based on Spark Streaming for further analysis, augmentation, and aggregation. This solution enabled us to ingest and analyze radio in near real-time.

Our Java client is reusable across a wide range of text-to-speech scenarios that require time-efficient speech-to-text transcription in more than 10 languages including English, French, Spanish, German and Chinese.

Permissively-Licensed Named Entity Recognition on the JVM
The ability to correctly identify entities, such as places, people, and organizations, adds a powerful level of natural language understanding to applications. This post introduces a MIT-licensed one-click deployment to Azure for web services that lets developers get started with a wide range of natural language tasks in 5 minutes or less, by consuming simple HTTP services for language identification, tokenization, part-of-speech-tagging and named entity recognition.

Clemens Wolff
November 20, 2017
0 comment
Autoscaling Deep Learning Training with Kubernetes
We explore how we worked with a customer to add autoscaling capability to a Kubernetes cluster to meet bursty demands for deep learning training in a cost-efficient manner.