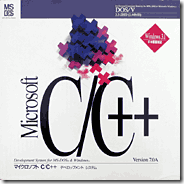 This month, we enter the third decade of C++ at Microsoft.

It was twenty years ago, in February of 1992, that we released our first C++ compiler: Microsoft C/C++ 7.0. Before then, we already worked with several of the C++ “preprocessor” compilers that took C++ and converted it to C before our compiler then created the executable program. But starting in 1992, Microsoft’s premier native compiler supported C++ directly, and has done so ever since.

C/C++ 7.0 shipped in a box that was over two feet long and produced MS-DOS, Windows and OS/2 applications. It also sported the last of the character oriented development environments for C that we ever shipped – the following product was Visual C++, which built on what we had learned from delivering QuickC. Since those early days, we have shipped eleven major releases of C/C++ products (ignoring small point upgrades) for both Windows and embedded development.

This month, on the 20th anniversary of our first C++ compiler, we’re looking forward to shipping the beta of Visual C++ 11. It includes support for ARM processors, Windows 8 tablet apps, C++ AMP for heterogeneous parallel computing, automatic parallelization, and the complete ISO C++11 standard library… and a few more of the new C++11 language features too.

Finally, to make this anniversary celebration complete, we’re shifting gears to pick up speed: After Visual C++ 11 ships, you’ll see us deliver compiler and library features more frequently in shorter out-of-band release cycles than our historical 2- or 3-year timeframe. And, of course, the first and most important target of those more agile releases is to deliver more and more of the incredible value in the new ISO Standard C++11 language. Please check Herb Sutter’s keynote at GoingNative 2012 for further details.

After 20 years, C++ is alive and well, and going stronger and faster than ever, not just at Microsoft but across our industry. Use it. Love it. And go native!

Reducing the Size of Statically-linked MFC Applications in VC11
Hello, I’m Pat Brenner, a developer on the Visual C++ Libraries team, and I am the primary developer working on the Microsoft Foundation Classes (MFC). In Visual...

Visual CPP Team
February 6, 2012
0 comment
GoingNative 2012 Online
Thanks to everyone who came to Redmond and/or watched online to participate in Going Native 2012, last week’s global C++-fest. It was a lot of fun, and generated a ...