For up-to-date documentation see Developing inside a Container using Visual Studio Code Remote Development.
Containers allow developers to package up an application with all the parts it needs, such as libraries and other dependencies, and ship it all out as one image. This is especially useful for C++ cross-platform development – with containers you can choose to target a platform that runs on a completely different operating system than your developer machine. And even if they are running on the same OS, the container technology ensures that the application will run on any other machines regardless of any customized settings that machine might have that could differ from the machine used for writing and testing the code.

Docker is a very popular container platform that makes it easy to create, deploy, and run applications by using containers, and whether you are a seasoned Docker developer or just getting started, Visual Studio Code has great support for working with Docker containers inside the editor.

In this blog post, we are going to walk through how to create a Docker image for C++, start Docker containers, and build and run a C++ “HelloWorld” app in the container using Visual Studio Code.

First, let’s get the tools you would need in this walkthrough:

Get our C++ “HelloWorld” app ready

Let’s first work on a C++ “HelloWorld” app, which we’re going to build and run in a Docker container later in this walkthrough. First, create a new folder on your disk and open it in VS Code. Then add a new file named Test.cpp in the folder. Your VS Code window should look like this: 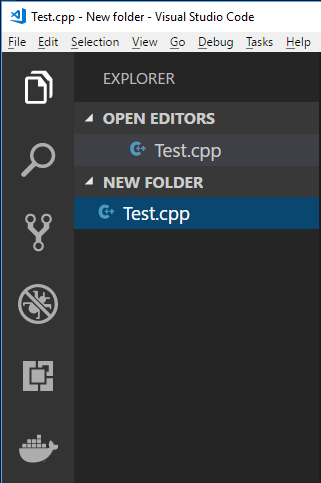 Now let’s put the following content into the Test.cpp file. Save the file and we are done here.

With Docker, you can build images by specifying the step by step commands needed to build the image in a Dockerfile. A Dockerfile is just a text file that contains the build instructions.

1. Create a Dockerfile. The VS Code Docker extension provides a command for adding a Dockerfile to your workspace. With the folder that we created in the previous section opened in VS Code, in the Command Palette (F1), select command Docker: Add Docker files to Workspace to generate Dockerfile, docker-compose.yml, docker-compose.debug.yml, and .dockerignore files for your workspace type.

You will be prompted with a list of platforms or languages you could target. In this walkthrough, let’s choose Other from the list, which will give us a generic Dockerfile from which we can build our C++ specific image.

2. Add build instructions to the Dockerfile. Now we are going to edit the generated Dockerfile with instructions for how the Docker image should be built. The Docker extension enables a great experience for editing Dockerfile by providing auto-completion suggestions, snippets, QuickInfo, and linting for the Docker commands.

In the following sections, we will describe how to build a C++ development environment with GCC and Clang as the compiler. Depending on which compiler you choose, you only need to follow one of the two sections (2.1 or 2.2).

2.1 Build a Docker image for a Clang environment

For building a C++ development environment with the Clang compiler, let’s copy the following content into the Dockerfile, which installs Clang on top of a base Ubuntu image.

2.1 Build a Docker image for a GCC environment

You can follow similar steps as above to build an image that installs GCC instead of Clang. Or, you could use a base image that has GCC pre-installed to simplify the steps. Let’s copy the following into the Dockerfile to use an image pre-installed with GCC:

Another way to invoke the Docker Build command is to right click on the Dockerfile itself in the VS Code Explorer window and select Build Image. You will then get a prompt asking for the name and version to tag the image.

While the build is in progress, you can see in the VS Code Terminal window how each step specified in the Dockerfile is being executed by Docker. See the following screenshot as an example. Once completed, you can find the built image under the Images node in the Docker tab in VS Code. The following screenshot shows the image we just built appearing at the top of the image list. One thing to note is that our base image “Ubuntu:latest” is also in the list. This means it could be reused as the base for other images to be built on top of, with only the image difference stored, which is a huge disk space saving compared with spinning up multiple full VMs.

Now that we have an image, let’s try to run it. There’re two ways to run an image using the Docker extension.  Run will execute the image and run the default CMD you specified above. In this case we will Run Interactive which will execute the CMD but also give us an interactive terminal which we can use to see what is going on inside the running container. In the Docker:Explorer window, we see the container we just started is running: In the Terminal window, we can see the default CMD we specified in the Dockerfile, which is to run our Test app (CMD [“./Test”]), has been executed by Docker and we got the output just as expected.

In this blog post, we walked through step by step for how to use the VS Code Docker extension to build Docker images, start Docker containers, and build and run C++ programs in the container. In a future post we’ll cover how to attach to a process in the container and debug it. If you have any suggestions for future topics regarding using C++ with containers, please let us know by leaving comments below.

Also, if you are using containers or doing cloud development with C++ we would love to hear from you. If you could take a few minutes to take our C++ cloud and container development survey, it will help us focus on topics that are important to you on the blog and in the form of product improvements.

std::string_view: The Duct Tape of String Types
Visual Studio 2017 contains support for std::string_view, a type added in C++17 to serve some of the roles previously served by const char * and const std::string& ...