Hello, I’m Pat Brenner, a developer on the Visual C++ Libraries team.  I’ve noticed some posts on various forums lamenting the loss of the ActiveX Test Container application and I wanted to address those concerns.

The sample is named TSTCON and is in the C++\MFC\OLE\TstCon folder in the ZIP file.  You can build this sample and run it to test the functionality of your ActiveX controls.

Note that there is a problem with the sample in Visual Studio 2008.  After building the application, running it will give an error message because “the application configuration is incorrect”.  To fix this, change the “Enable User Account Control” property on the Linker / Manifest File property page for the TCProps project to No (as in the screen shot below) and rebuild the solution.  You will need to do this for all configurations and platforms that you want to run.  Once you do so, the tool will run (in both Win32 and x64 configurations) without issue. 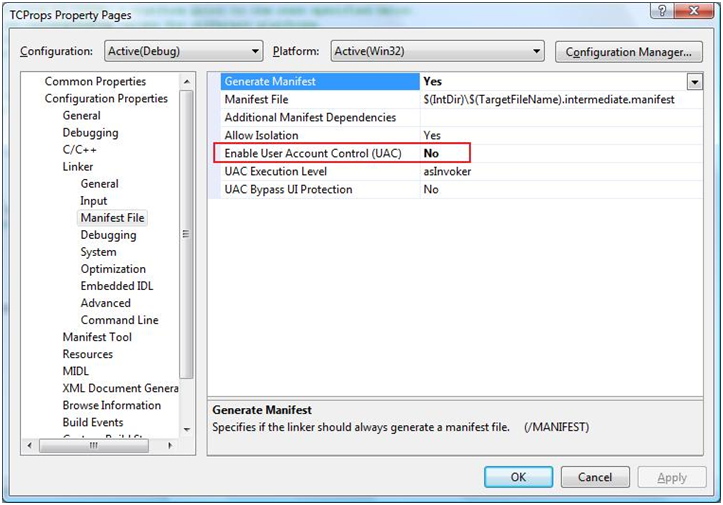 This tool was removed from the set of tools shipped with Visual Studio 2008 for a couple of reasons:

·         The code base is fairly old, and had not been maintained on a consistent basis, so there were some bugs in the tool but no resources available to fix them.

·         The perception was that the tool was no longer widely used by our customers, so shipping it as a sample was thought to be sufficient.

More information about the sample can be found here.

I hope you find this information helpful.  Feel free to ask any questions you have and I’ll do my best to answer them.

VC++ Developer Survey
As we wrap up Visual Studio 2010, we are starting to plan the next release of Visual C++. Our goal is to make Visual C++ a product that meets your needs. Thus we need ...