When we set out on our journey to re-imagine how setting up Continuous Integration for your apps would look like, two things we always had in mind were speed and simplicity. When setting up your first branch, you would benefit from our fast analysis of your repository, allowing you to pick the right project with a few clicks. Over the course of the last few months, we have heard your feedback that you would love to use your existing configured branches as a basis for new build configurations.

We’re excited to let you know that one of several improvements coming to our Visual Studio App Center Build service is the ability to clone build configurations from existing branches to new branches. Here’s how it works:

From an unconfigured branch, a new option will appear in the dropdown if you have at least one branch configured already. This will allow you to clone an existing build configuration for your app, by offering a selection of already configured branches in your app.

Once you click Clone, the configuration will be cloned, and you can start building from it.

Also, you can select to clone the configuration from the branch list right away: 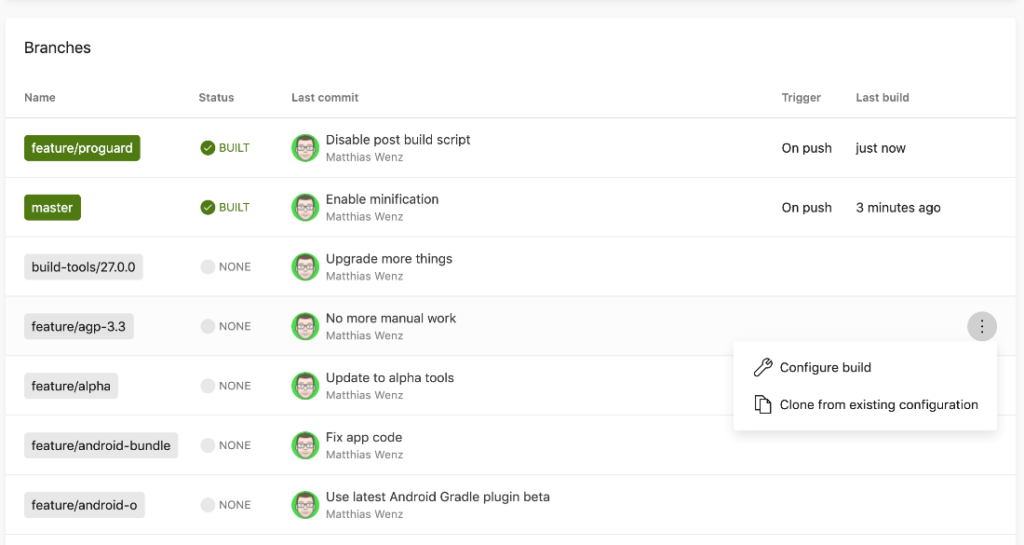 Being able to clone build configurations streamlines a lot of repetitive tasks, such as having to type in your signing credentials for new configurations and also opens new possibilities.

Since your branch might not be identical to the one that you’re cloning the configuration from, we also offer you an easy way to jump right into editing your newly cloned build configuration:

Now you can use existing configurations as a template, and then just tweak individual settings to match the branch your new configuration belongs to.

We are excited to see how cloning build configurations improves your daily Continuous Integration setup flow and what creative use cases you find for it.  We can’t wait to hear your feedback!

Three SDK Tips To Get More From Visual Studio App Center Analytics
In this post, I’m going to share how you can best leverage and utilize client-side APIs supported in the App Center SDK to have control and flexibility on storing, prioritizing, and sending the Analytics data to App Center backend.

Ela Malani [MSFT]
June 24, 2019
0 comment
JSON Web Token and React Native Support Arrives to Visual Studio App Center Auth
We shipped App Center Auth in early preview on May 7, and it’s been an exciting month and a half since our launch! During this time we’ve actively engaged with our developers and rolled out a couple of product improvements based on your feedback.