Protect your Xamarin.Android Apps at Runtime with Dotfuscator

In a previous blog we discussed obfuscating your Xamarin application with Dotfuscator Community to protect it from reverse-engineering. That kind of protection is an important and necessary layer in your application’s security posture, but it shouldn’t be the only layer. The application also needs to react to threats at runtime in order to protect its own integrity, and to protect the data that it accesses.

One such threat on the Android platform is that of rooted devices. Once an Android device has been rooted (either deliberately by its owner, or surreptitiously via malware), there is no longer a strong guarantee that the operating system’s security controls are in place and working as intended. When an application is running on a rooted device, it can no longer trust the integrity of its environment. For example, it cannot assume that system calls do what they are supposed to, or that malware is not running on the device, sniffing network traffic, or logging keystrokes.

Now, in Visual Studio 15.8, Dotfuscator Community can help mitigate this threat by injecting Android root detection and response into your Xamarin.Android applications. This article will explain why and how to do that, and what types of responses you might want your application to perform.

Joe Sewell’s article in the May 2018 issue of MSDN Magazine, “Detect and Respond to Rooted Android Devices from Xamarin Apps”. The article outlines a couple reasons why running on a rooted device can be a threat to security:

One of the other branches (“phone-home”) demonstrates incident logging by sending a custom event to Visual Studio App Center. You might already be using App Center’s services for usage and crash reporting—this branch shows how you can customize the application’s response to rooted devices to also send security-related telemetry.

Let’s take a closer look at that scenario, to see how it works. To get started, follow the Setting up the Sample steps in the README.md file, on the “phone-home” branch. It tells you how to:

Once you’ve done that, you’ll have a sample Xamarin.Android application that detects when it is running on a rooted device, and responds by sending an event to the App Center analytics service.

If you run the application on a rooted device or emulator, and press the Login button, you ought to see the event in your App Center Analytics dashboard:

Launch the Dotfuscator Community GUI from the Visual Studio Tools menu, and open the config in the TodoAzure.Droid project (DotfuscatorConfig.xml). To see how the Root Check is configured, click on the Injection node on the left, then on the Checks tab to the right. You should see a “RootCheck” listed, as in the screenshot.

Root Checks are associated with one or more methods in the application. These are the locations into which Dotfuscator injects the root detection logic. In this case, the Root Check is configured for a single method, the click handler for the application’s login button.

Root Checks have three properties that control the behavior of the responses:

You can see how the sample application uses the “isDeviceRooted” field, by looking at the source code in LoginPage.xaml.cs: 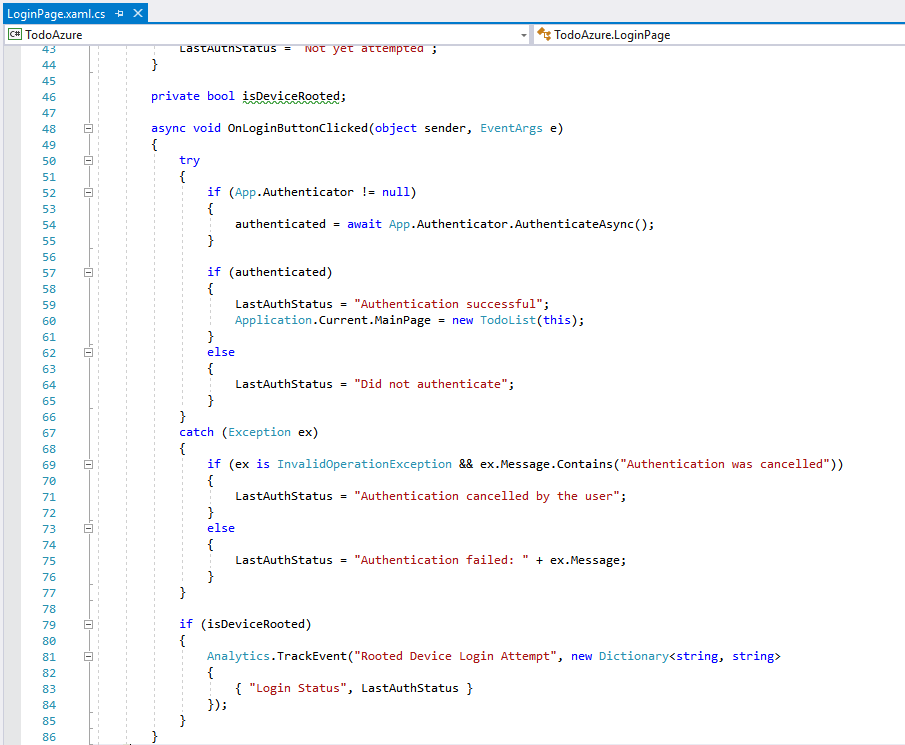 The Login button’s click handler checks the value of the field and sends the event to App Center if it’s true.

This is a simple example, chosen to demonstrate how easy it is to add root detection to your application, and connect it to an application defined response. The same GitHub repository contains other branches with more complex responses, including the one outlined in the MSDN article.

In this blog post, we’ve seen how you can use Dotfuscator Community to add root detection to your Xamarin.Android application, in order to mitigate runtime security threats to both the application itself and the data it accesses.

For a deeper dive into root checks, see Joe Sewell’s MSDN article, referenced above. More information about integrating Dotfuscator with the Xamarin build pipeline, and a demonstration of Dotfuscator Community’s renaming obfuscation, can be found in the earlier blog Protecting Your Xamarin Apps with Dotfuscator.

If you want to go beyond Dotfuscator Community, Dotfuscator Professional has a broader portfolio of protection techniques for Xamarin, and is licensed for use on commercial products. Free trials are available upon request, and they include full product support.

You can get the latest developments in the application protection space by visiting the PreEmptive Solutions blog, and by following PreEmptive on Twitter.

Slava Chernikoff
October 16, 2018
1 comment
Xamarin.Forms 3.3.0: Little Things, Huge Difference
The Xamarin.Forms team has been working closely with our open-source community to help fill in the “little things”. Things you’ve told us are important to building your mobile apps and being supremely productive in the process. Since Xamarin.Forms 3.0 shipped at Build 2018, we have been collaborating with you to deliver over 20 new features and fixes. With many more on the roadmap!