Introducing the Git Status Bar and Testing Improvements in Visual Studio for Mac 17.5

Last week saw the release of the third preview in the lead up to the official release of Visual Studio for Mac 17.5, and in this blog post we’re going to look at some of the changes in this release – the new Git Status Bar, and some other improvements that have been made to the Test Explorer tool window.

Improving the Git experience is one of Visual Studio for Mac team’s primary areas of focus for 17.5and one of the big new features is the Git Status Bar.

When you open a solution which has a Git repository the Git Status Bar will appear in the Status Bar area at the bottom left of the main window.

From this status bar you can see the currently selected branch, the current commit, and the number of uncommitted changes that have been made. Clicking on the number of changes focuses the Git Changes tool window where you can review the changes and carry out operations on them.

One of the biggest improvements to the Git workflow so far, however, is when you click on the branch name in the lower left-hand corner of the status bar. This opens the branch selector menu and from there you can switch to a different branch or carry out branch operations such as merge, rebase etc. The branch selector menu shows the most recently used branches directly in the top level of the menu. Additionally, you can dive down into the Locals, Remotes and Tags submenus to find and switch to a specific branch. 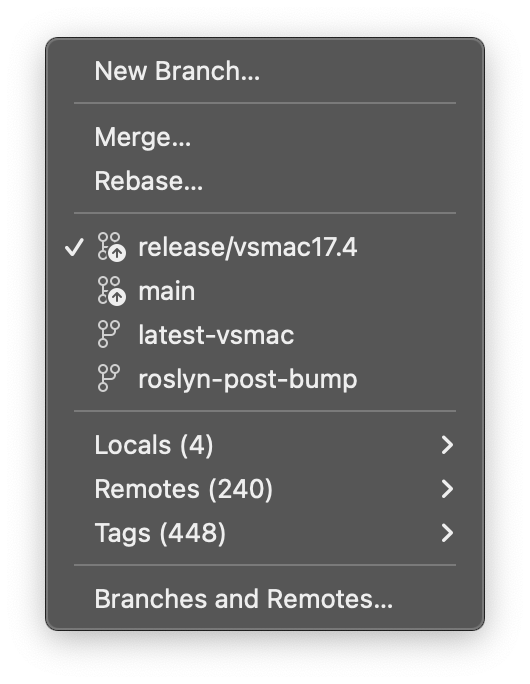 The Test Explorer tool window has seen many bug fixes and improvements to both usability and performance. Test discovery is improved for projects that used wildcards in NuGet packages, and UI delays have been reduced when running tests. Additionally, tests that target multiple platforms and use .NET 6.0 or 7.0 can now be run using the test host that matches the correct chipset architecture.

Download Visual Studio for Mac 17.5 Preview 3 and try it for yourself

The Git Branch Selector and the changes to the Test Explorer are just a few of the recent improvements that have been made in the lead up to the release of Visual Studio for Mac 17.5, so why not try out Preview 3 today and see for yourself

Documents and tool windows unleashed
We’re continuing our video series with tips and tricks to help you get the most out of Visual Studio. This week is all about managing tool windows and documents. There ...

Mads Kristensen
January 24, 2023
4 comments
Keyboard Shortcuts to Master Your Git Flow in Visual Studio
One popular way for users to optimize their efficiency is to leverage shortcuts to interact with the UI. With Git tasks, like Committing, Pulling, and Pushing being part ...