Our first public release of Visual Studio Update for Microsoft Visual Studio 2013 is available. There are, however, a couple of known issues in hopefully uncommon scenarios.

Technically, this was fixed for VSUpdate 1 RTM, but the fix has to be in the release getting upgraded, so going from VSUpdate 1 RTM to any future CTP or release bits will not exhibit this problem. 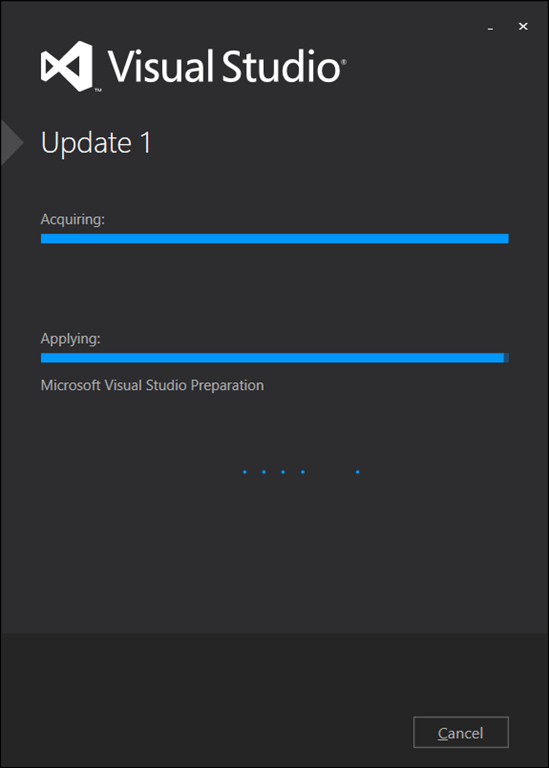 When upgrading an older install of VSUpdate 1 pre-release for Visual Studio 2013 to a newer version including VSUpdate 1 RTM, the process may run very slowly. Often times, it will appear stuck on “Microsoft Visual Studio Preparation” with the progress bar almost full.

Update: We have confirmed that this issue should not reproduce when moving from VS2013 Update 1 RTM to a newer Update build. This only affects upgrades from pre-release versions of VS2013 Update 1.

There is no current workaround that will save time. You might consider starting the upgrade before taking a lunch or heading out for the day.

In an effort to improve reliability for the product when installing or uninstalling updates, when an update is removed the base product is repaired. This, in turn, may trigger other repair operations for other add-ins or patches to Visual Studio installed with Burn (the WiX chainer). Past versions required that you do this separately or you may have problems loading VS or one of its add-ins.

When a newer version of VSUpdate, for example, is installed it uninstalls the previous version – much like a major upgrade in Windows Installer. This in turn repairs RTM. While this is most often necessary when simply uninstalling an update, it is not necessary when the uninstall occurs because of an ongoing upgrade.

This has been fixed in future versions of VSUpdate and Visual Studio, so that installing VSUpdate 2 over VSUpdate 1 does not incur the performance penalty of repairing RTM.

How to relocate the Package Cache
Visual Studio can require a lot of space on the system drive. Based on years of data collected from customers’ installations from the Customer Experience Improvement ...