Visual Studio 2008 Service Pack 1 is comprised of multiple packages, including executables, installer packages, and patches. Compare this with Visual Studio 2005 SP1 which was a single patch wrapped in an executable. A lot of updates were made to both the .NET Framework and VS 2008 – along with changes to SQL and other bits from across the company – so a download manager was created to download only what you need.

But if you want to put VS 2008 SP1 on your network or a DVD for later or continued use, you can pass /createlayout to the download bootstrap application. The /createlayout parameter requires an argument to specify the directory to download to.

After a brief moment, the following dialog is displayed. 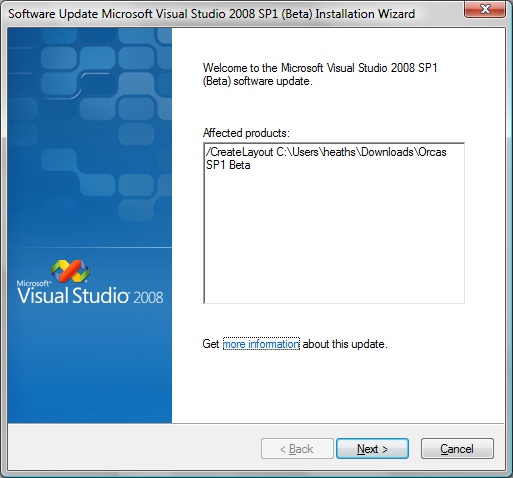 This will download all the packages for a single language of VS2008 SP1 and will put an executable named SPInstaller.exe into that same directory. You’ll need about 782MB free for SP1. Run SPInstaller.exe to install the service pack from that install point. SPInstaller.exe will first use valid packages in the same containing folder before fetching them from the Internet.

There is a known issue that .NET Framework 3.5 SP1 requires an active connection when installing the layout. This is because only the web bootstrap application is downloaded. For VS2008 SP1 Beta, you can work around this by downloading the full redistributable and replacing dotnetfx35setup.exe in the layout folder where you saved the rest of the downloaded files. Note that the package you download will be dotnetfx35.exe, so you’ll need to rename it to dotnetfx35setup.exe. Just selecting the existing dotnetfx35.exe file in the Save As dialog will do this automatically.