In my previous post, I showed you how to parse the output from the netstat command. The output of netstat is not very complex. The goal of the post was to introduce some parsing strategies that you can use to create a full Crescendo module. In this post, I explain the details of a more complex parsing function that I created for my VssAdmin module.

Examining the parser for Get-VssShadowStorage

The following screenshot shows the ParseShadowStorage function that is called by the Get-VssShadowStorage cmdlet to handle the output from vssadmin.exe. The parsing process is broken into four areas: 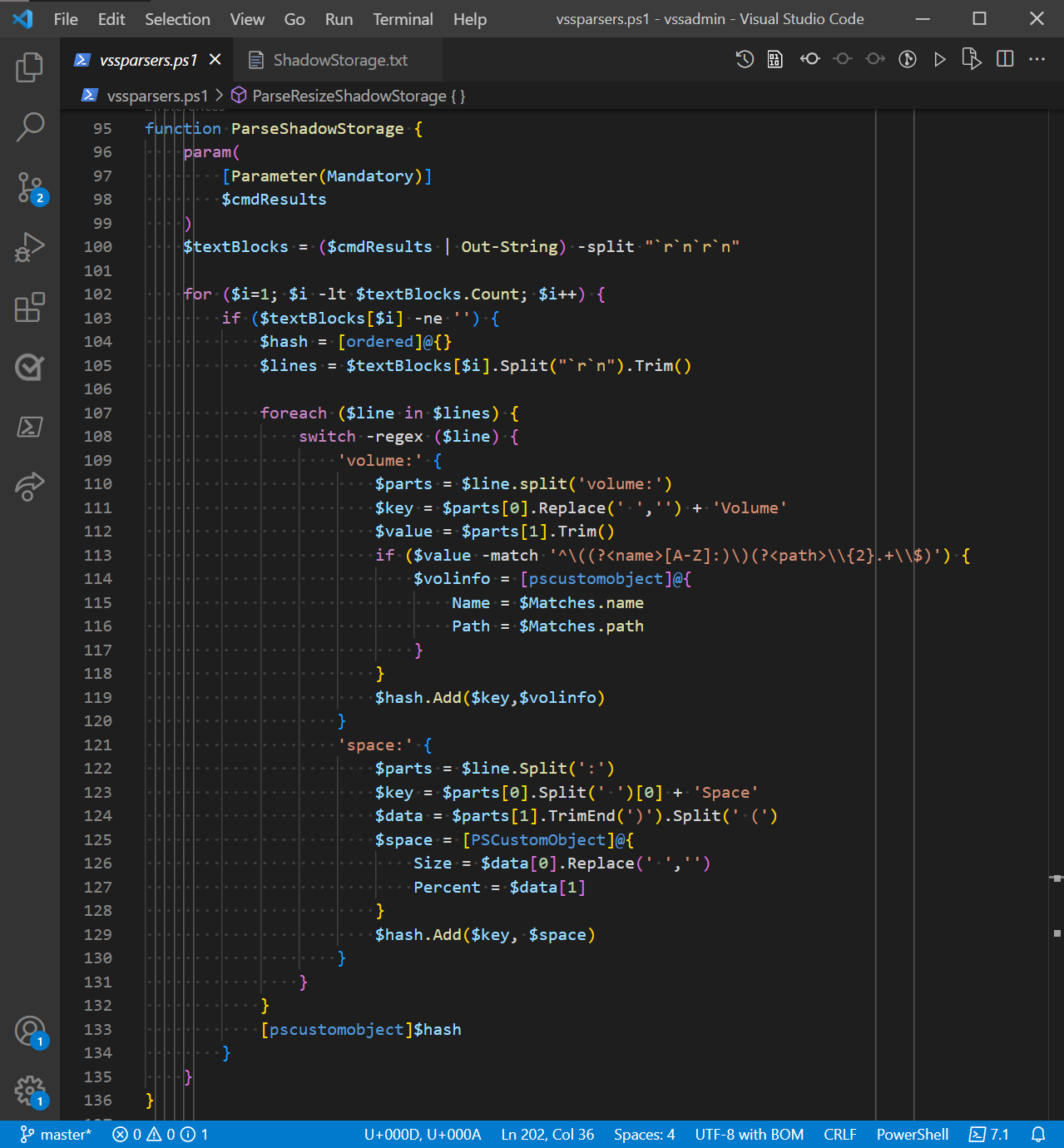 The output from vssadmin.exe list shadowstorage is passed into the output handler function as an array of strings. Here is an example of the output:

All the vssadmin.exe commands followed this pattern. There is a 2-line header followed by one or more groups of lines of data. Each group of text is separated by a blank line. So first, I wanted to get the text split into the blocks separated by the blank line.

Piping the $cmdresults parameter to Out-String turns that array of lines into one contiguous blob of text. Then, I split that blob into blocks of text at the blank line using the -split "`r`n`r`n" operator. The $textblocks variable now contains 2 block of text. The first block is the header and the second block is the data. Using the for loop on line 102 I start proccessing the lines in the second text block. I can skip the first since is only contains the header.

Parsing the lines of the textblocks

On line 105, I split the text block into an array of lines so that I can process each line. Looking at the example data above, I can see that there are two kinds of information: volume and space information.

In both cases, I want to collect the data in a key/value pair. The line is split into two parts by the “volume:” or “space:” strings.

The text of the first part is used to create the key name.

I now have a key/value pair ready to be added to a hashtable in line 119 or 129. Once all the lines have been parsed, the hashtable is complete. Line 133 converts the hashtable to a PSObject, which is returned to the Get-VssShadowStorage cmdlet function for output.

I use this same strategy to create parsing functions for all of the vssadmin command outputs.

I used several different methods to parse the strings into data:

Each native command has its own unique output. Crescendo does not help you analyze or parse that output. You must take the time to collect the output, analyze the structure of the information, and devise a strategy for extracting the data from the strings.

Posts in this series

Sean Wheeler
October 14, 2021
0 comment
How to use the Secret modules
Q: I have a bunch of scripts we use in production that make use of Windows credentials. In some cases, these scripts have an actual password in plain text, while others ...