The past year has come with significant updates to our SharePoint user experiences, such as modern team sites, document libraries and pages. These modern experiences feature simple and powerful web parts that are responsive, easy to use and mobile-ready. By customizing web parts on a page, team members can build tailored sites that feature the most relevant content and tools for their team. In addition to a rich set of web parts available within SharePoint, developers can also create completely new web parts. We’re modernizing our developer surface to keep pace with rapidly changing techniques and technologies used in the broader industry. SharePoint Framework lets developers take advantage of up-to-date practices, tools and libraries to help them build more engaging, mobile-ready web parts at a rapid pace.

Today, we’re proud to announce the general availability of SharePoint Framework—allowing developers and administrators to build and deploy parts that are used by Office 365 users in their production environments.

What is the SharePoint Framework?

Our partners, customers and independent developers have created innovative solutions using SharePoint’s page and web part model, which was largely implemented in .NET and, like many content and collaboration systems, was designed and matured in the server-rendered era. The SharePoint Framework (SPFx) is a page and web part model that provides full support for client-side SharePoint development, easy integration with SharePoint data and support for open source tooling. With the SharePoint Framework, you can use modern web technologies and tools in your preferred development environment to build productive experiences and apps on SharePoint that are responsive and mobile-ready from day one!

For more details, be sure to check out our full blog post announcing the SharePoint Framework last May.

Since the SharePoint Framework Developer Preview was released in August, we’ve seen substantial community excitement and contributions. At Microsoft Ignite, SharePoint Framework was one of the top discussed items on Twitter among Microsoft technologies at the event. Community contributions to the evolving SharePoint Framework have been strong, with dozens of blog posts around tools and techniques from the community exploring various facets and techniques of building parts. Over 30 code samples are now live in our GitHub repository for code samples—many of which were built by the community. We also have a showcase of parts created by partners—many created a few short weeks after initial release. 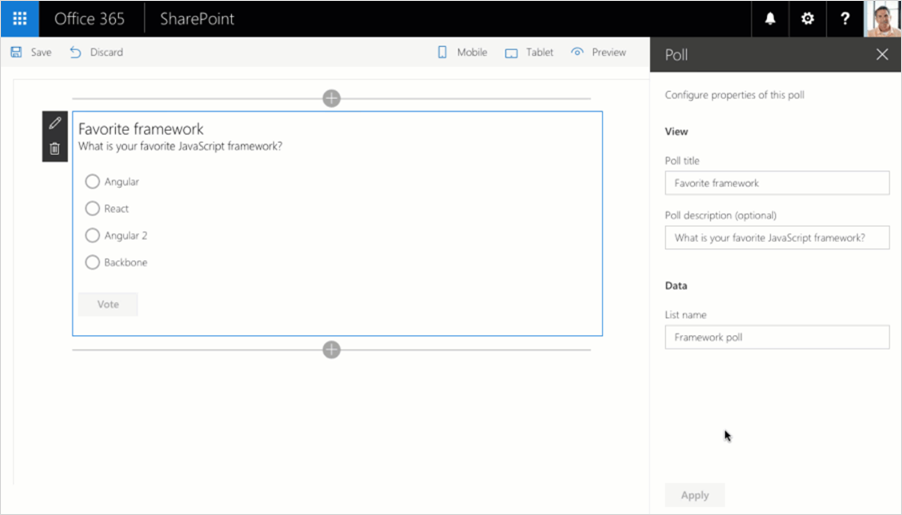 During the developer preview period, the SharePoint Framework itself evolved quickly based on feedback. Over the span of three months, six distinct updates to the framework were made, including many features and fixes based on developer feedback from the community. Examples include improved initial start size and making facets of our build process more customizable and consistent.

How to get started

Developers can learn more about building web parts and custom solutions with the SharePoint Framework at the Office Dev Center, leveraging code samples from our GitHub repository, and by watching these related sessions from Microsoft Ignite:

We—and a lot of #SPFx developers—can’t wait to see SharePoint Framework web parts in the hands of users!

ISV GTM (Go to Market) Series : How to run effective campaigns with campaign tracking and acquire new users
This blog post is part of a new series based on our newly published guide for being effective in “Going to Market” with your Office add-in or service. We’ll follow up in later blogs

Office Add-ins team
February 24, 2017
0 comment
Yammer Partner Q&A: Process Street’s CTO, Cameron McKay
The benefit of online forums is that developers can learn from each other. At Yammer, we expand on this knowledge sharing by publishing interviews with the developers of successful Yammer