The Windows key is used in a bunch of useful hot keys. Probably my favorite is Windows+Shift+s, which lets you copy any rectangular area on your screen(s) to the clipboard. I use this hot key a lot in describing application UI and other objects on the screen such as those in this post. I also use Windows+x y to see system info such as the name of the computer.

Another cool Windows hot key is “Windows+.” or “Windows+;”. Using Windows+Shift+s, I get the image 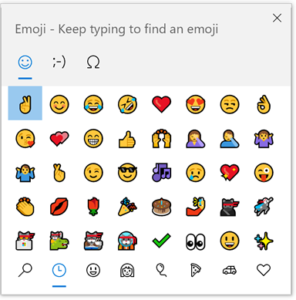 You can see related character displays by clicking on the characters in the bottom row. You can scroll these displays to see more characters. Clicking on a character not in the top or bottom row inserts that character into your active app.

Now click on the Ω in the top row of characters. You get 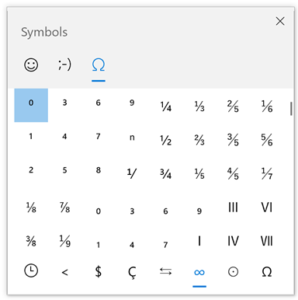 Here I’ve selected the ∞ page. This has many fractions, numeric subscripts and superscripts, ∞ of course, and, if you scroll down you can access myriad math symbols such as ∰. For example, you can see I wish C++ would use some of those relational operators instead of being stuck in the 1960’s with ASCII sequences like “!=” instead of ‘≠’! Clicking on the ⨀ in the bottom row reveals still more math symbols.

The Assistive Technology (AT) program Narrator describes some of the features of these displays and knows how to speak the emoji characters. But it doesn’t know how to speak most of the advanced math symbols. In fact, I have a hard time speaking some of those symbols myself, like ⋈ (bowtie?)

RichEdit HTML Support
RichEdit has had limited HTML support for many years, but it wasn’t general enough to document publicly. A recent RichEdit client (to be described in a future post) ...

murrays
May 30, 2021
0 comment
Switching from LaTeX to UnicodeMath Input Mode
Here’s a bit of a puzzle. When the user enters “a/b” in LaTeX mode and formats it with the Enter key, the ‘/’ is marked as “nobuildup”. If the user then ...