The week in .NET – On .NET with David Pine, PwdLess, Terraria

Last week, David Pine was on the show to talk about his magic mirror, a screen in a mirror, that can display useful information such as his schedule for the day, the weather forecast, and much more. The mirror uses a Raspberry Pi 3 running Windows 10 IoT Core, and runs a custom, open-source UWP application. It also has a camera, microphone, and sound bar, enabling voice-based interactions.

This week, we’ll talk about the year ahead for .NET. The list of guests is still TBD as I’m writing this, but I hope to have some good surprises. We’ll take questions on Gitter, on the dotnet/home channel and on Twitter. Please use the #onnet tag. It’s OK to start sending us questions in advance if you can’t do it live during the show.

Update: no show this week, sorry about that. We’ll have two shows next week, however…

Package of the week: PwdLess

Passwords suffer from many issues, and their efficacy is to be doubted more and more with each mass breach, some of which leaked hundreds of millions and up to a billion passwords. There are alternatives to passwords, however, that may be appropriate for your applications.

One such alternative is “magic links”, that are nonces that the application usually sends to an email address or phone number that is known to belong to the user.

Even though PwdLess is built with .NET, it’s usable from any platform through its simple HTTP API. GET /auth/sendNonce?identifier=[IDENTIFIER] sends the nonce, and GET /auth/nonceToToken?nonce=[NONCE] responds 200 with the JWT if the nonce is valid.

PwdLess configuration is done through a simple JSON file:

Game of the week: Terraria

Terraria is an incredibly popular 2D adventure-survival game that blends classic action game mechanics with sandbox style freedom. In Terraria, players dig, fight and explore the world gathering materials that can be used to craft gear, machinery, and dwellings. You can seek out foes that grow in difficulty as you build up your very own city, giving allies that you encounter along your travels a place to stay. Terraria features randomly generated open worlds, a vast amount of weapons and armor, and numerous crafting options. 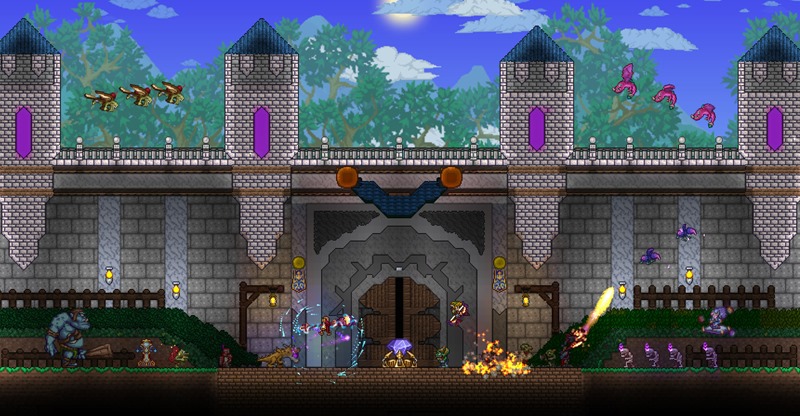 Terraria was created by Re-Logic using C# and XNA. It is available on Steam for Windows and Mac, Xbox 360, Xbox One, PlayStation 3, PlayStation 4, PSVita, Android and iOS.

User group meeting of the week: migrating from TFS to the cloud in Sydney

On Wednesday, January 18 at 6:30PM, the Sydney .NET User Group will have a session with Danijel Malik on migrating from TFS to the VSTS portal.

.NET Core Image Processing
Image processing, and in particular image resizing, is a common requirement for web applications. As such, I wanted to paint a panorama of the options that exist for .NET...

Bertrand Le Roy
January 19, 2017
0 comment
ASP.NET Core Authentication with IdentityServer4
This is a guest post by Mike Rousos In my post on bearer token authentication in ASP.NET Core, I mentioned that there are a couple good third-party libraries for issuing...