One Week of Open Source

Last Wednesday, we announced the new .NET 2015 Preview and our plans to fully open source .NET Core. What an awesome week!

We knew that you guys would really dig open source but we didn’t expect such a positive response. Within a single week, our open source blog post got more than 200k views! And even on GitHub, which seems to be the place for open source these days, .NET Core jumped at the top of the trending GitHub repositories for last week.

We also have seen a tremendous activity in our social channels, specifically Twitter, blog comments and our Facebook site. I’ve seen very few negative comments – the overwhelming majority of the feedback was congratulations and genuine excitement.

But that’s not all – we’ve also received and accepted 20 pull requests from the community. The first one was from Adam Ralph who fixed a test break. We also received some substantial contributions such as performance improvements to immutable collections. 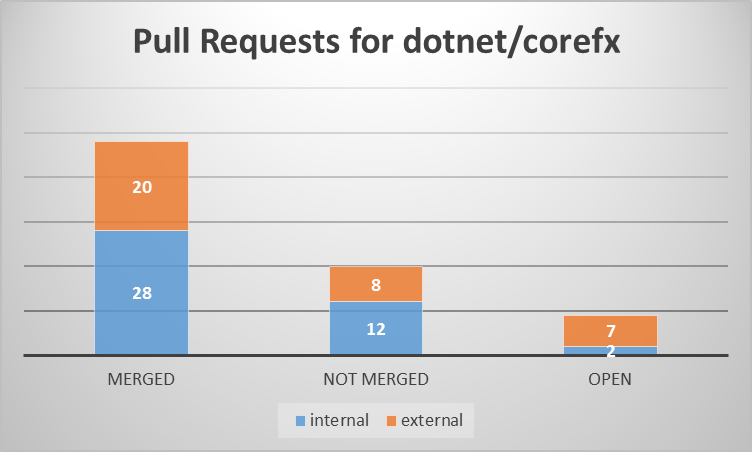 Some of the contributions were requests for API additions, such as async overloads for XDocument. We’re still figuring out the process for reviewing public API additions. As you know, we still very much care about interoperability between .NET Framework and .NET Core. Thus, we need to be mindful about the fact that we may need to port API additions back to the .NET Framework – which we know isn’t exactly cheap or easy. However, at the same time we don’t want to slow down .NET Core too much. After all, we’ve created this new stack so that we can release more often. So we need to strike a good balance here.

In case you haven’t you should check the Microsoft GitHub landing page:

We’re entertaining the idea of integrating charts like the one above into this site so that you can get a live view. What do you think?

Please don’t hesitate to give us feedback. My team is still learning on how to play in an open source world so we’re heavily depending on you, our community, to tell us whether we’re heading in the right direction or not.

You can engage with us on the GitHub site, the .NET Foundation forum and Twitter.

Content negotiation in MVC 6 (or how can I just write JSON)
[Update] - We decided to make two significant changes starting with Beta3, we are to not include the XML formatter by default, as well as special treat browsers. The ...

Yishai G_
November 24, 2014
0 comment
Advisory Council Proposal — Call for Community Feedback Extended to December 5th
This is a cross post from the .NET Foundation blog and written by Gianugo Rabellino. --ImmoThe increased openness of .NET has sparked widespread interest in the...