This post was written by Daniel Plaisted, a member of the .NET Framework team who will be at MonkeySpace.

MonkeySpace is the “official cross platform and open-source .NET conference.” This year, MonkeySpace Europe will be held June 9th-11th in Dublin, Ireland. Since it’s a conference specifically focused on open source and cross platform .NET, we’re going to be there!

.NET Open Source. Many of Microsoft’s .NET libraries and frameworks are already open source. ASP.NET, Entity Framework, and F# are some examples. Recently, we’ve stepped up our open source efforts.

Cross platform code sharing. In Visual Studio 2013 Update 2, we’ve made a bunch of improvements which make it even easier to share code across platforms.

There are lots of great speakers and sessions lined up for MonkeySpace, including several from members of the .NET team:

The Present and Future of .NET in a World of Devices and Services – Jay Schmelzer
Come see an end-to-end view of the .NET platform in the new world of devices powered by cloud services. In this session you will see the present and the future of .NET in key areas such as the runtime, compiler and language foundation as well as the latest innovations for creating native applications in Windows, Azure services and cross-device experiences.

The Future of .NET on the Server – Howard Dierking
Learn about new thinking around ASP.NET and the .NET Framework. What does ASP.NET look like in 2014 and beyond? In a world of NuGet packages and modular frameworks, of lightweight VMs, how could ASP.NET change and get faster, leaner, meaner, and more?

The Future of C# – Dustin Campbell
Project Roslyn is a complete renewal of the C# and Visual Basic compilers, exposing them as full fidelity APIs for everyone to use, and providing a great foundation for evolving the tool experience and the languages themselves. And now it’s Open Source! How can you make use of Roslyn, and what new language features do we have in store? Come and see!

Creating Cross Platform .NET Libraries – Daniel Plaisted
There are two main ways of reusing code across platforms in .NET. You can either share the source code and create multiple binaries or use Portable Class Libraries to create a single one. There are pros and cons to each method, and in this session we will learn how to combine both of them so that consumers of your library can get all of the benefits and none of the drawbacks! Learn the technique that Miguel de Icaza has called “amazing” and “a godsend”! We’ll also learn some details of how PCLs work, and where we are planning to take them in the future.

MonkeySpace promises to be a great conference this year. 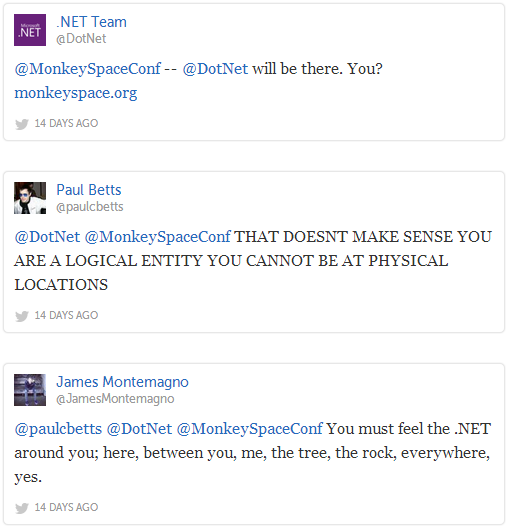 We look forward to seeing many of you there. There’s still time, so register today! You can also view recordings of sessions from past conferences. And whether you can make it or not, always remember to feel the .NET all around you!