ML.NET is an open-source, cross-platform machine learning framework for .NET developers. It enables integrating machine learning into your .NET apps without requiring you to leave the .NET ecosystem or even have a background in ML or data science. ML.NET provides tooling (Model Builder UI in Visual Studio and the cross platform ML.NET CLI) that automatically trains custom machine learning models for you based on your scenario and data.

We recently released ML.NET 1.5 and 1.5.1 as well as a new version of Model Builder. These releases include numerous bug fixes and enhancements, as well as new features for anomaly detection and time series data, improvements to the TextLoader, local GPU training for image classification in Model Builder, and more.

What’s new with the ML.NET API? 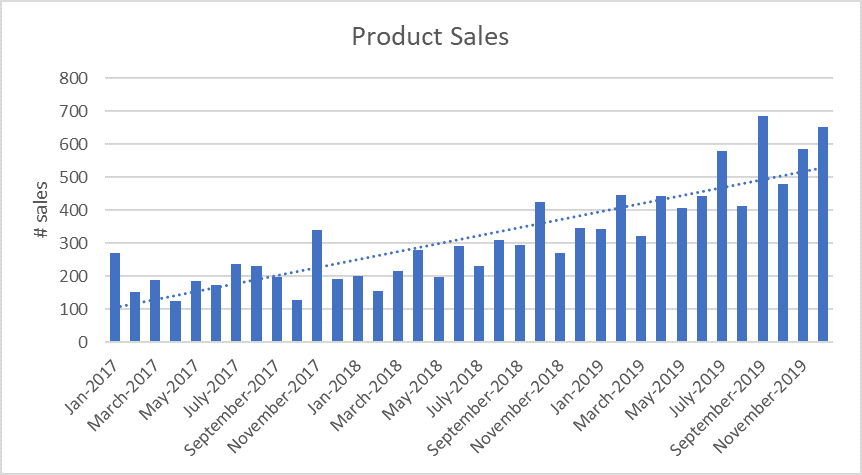 There are many applications for time series data in machine learning. Anomaly detection and forecasting are two of the most commons scenarios supported by ML.NET:

The ML.NET 1.5 update added a new anomaly detection algorithm called DetectEntireAnomalyBySrCnn. This algorithm allows you to detect anomalies for an entire dataset at once. This is in contrast to the existing DetectAnomalyBySrCnn algorithm, which streams parts of the dataset and examines a window around points to find anomalies.

However, if your time series data is streaming, you don’t have all your data on hand, or your data is too large to fit in memory, you can still use the previous DetectAnomalyBySrCnn algorithm.

Check out this sample to see how to use the DetectEntireAnomalyBySrCnn algorithm.

This update also added root cause detection, which is a feature that can identify which inputs likely caused an anomaly. For example, say you have housing data for Seattle, and one of the house listings shows an abnormally high price (e.g. an anomaly) on August 6. Using root cause detection, you may find that the neighborhood and property type are the contributing factors to the abnormally high price. The 1.5.1 update also added the ability for you to define a threshold for root cause analysis which can influence which features are chosen as root causes.

The code below shows how to implement root cause detection and print the results (full sample can be found here).

The 1.5.1 update also added new capabilities for working with time series data, including seasonality detection and the ability to de-seasonalize seasonal data prior to anomaly detection. For example, say you had sales data from the past 5 years, and you noticed that sales always go up in the holiday months. Normally, this spike in sales would be counted as an anomaly, but now you can use ML.NET’s seasonality detection feature to identify this yearly occurrence and normalize the data against the seasonality before your anomaly detection analysis so that it does not show up as an anomaly.

Currently, you can use the AutoML.NET API for the ranking scenario, but we are working on adding AutoML ranking to tooling (Model Builder and the ML.NET CLI) as well.

The code below shows how to use the AutoML.NET API to create a ranking experiment and print the results (full sample can be found here).

The 1.5 update also improved the TextLoader experience, which includes adding the following features:

You can now utilize your local GPU for faster Image Classification training via Model Builder in Visual Studio.

We tested local training with a dataset of ~77K images. Comparing CPU with GPU, we got the following results: 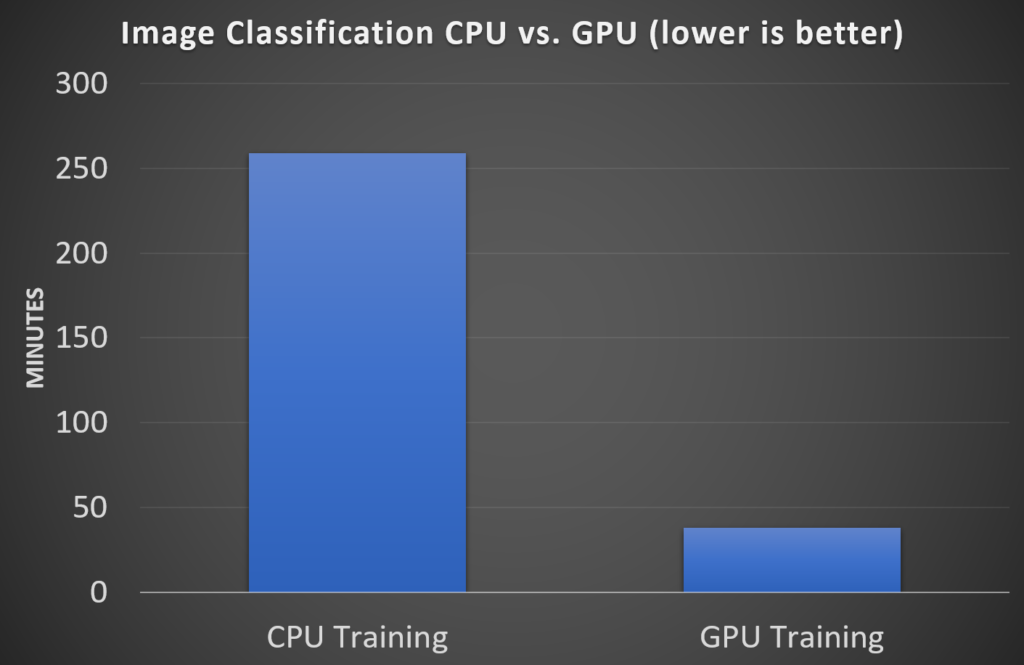 When you open Model Builder and select the Image Classification scenario, you will now see a 3rd option for Local GPU training (in addition to Local CPU training and Azure training).

After selecting Local (GPU) as your training environment, you can check to see if your machine is compatible for GPU training right in the Model Builder UI.

Currently, Model Builder can check that you have a CUDA-compatible GPU and the GPU extension installed. However, it can’t yet check that you have the correct versions of CUDA and cuDNN. We are working to add this compatibility check in a future release.

Don’t have a CUDA-compatible GPU but still want faster training? You can train in Azure, either by selecting the Azure training environment in Model Builder to utilize Azure ML or by creating an Azure VM with GPU and using Model Builder’s local GPU option for training.

You can read more about how to set up GPU training in the ML.NET Docs.

It’s now even easier to open GitHub issues for Model Builder. We’ve added a Feedback button so that you can start to file bugs or suggest features from the UI in Visual Studio.

Selecting “Report a bug” or “Suggest a feature” will open up GitHub in your browser with the corresponding template to fill out. 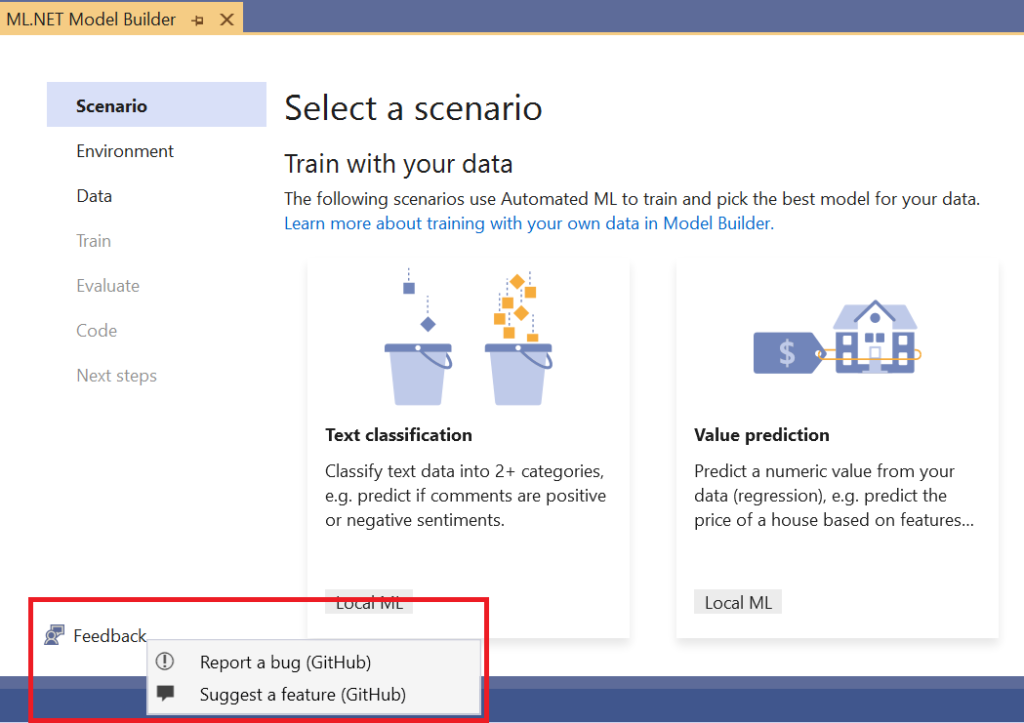 Thanks to our contributors

For these updates, we had help from some other teams at Microsoft!

Thanks to Klaus Marius Hansen and Lisa Hua from the PowerBI team and Shakira Sun and Meng Ai from the Kensho team for all of your contributions!

We would love to hear your feedback!

If you run into any issues, please let us know by creating an issue in our GitHub repos (or use the new Feedback button in Model Builder!):

Get Started and Resources

Get started with ML.NET in this tutorial.

Learn more about ML.NET and Model Builder in Microsoft Docs.

New C# Source Generator Samples
This post describes two new generators that we added to the samples project in the Roslyn SDK github repo. The first generator gives you strongly typed access to CSV data. The second one creates string constants based on Mustache specifications.