Announcing the RTM of Visual F# 4.0

We are pleased to announce that Visual Studio 2015, and along with it Visual F# 4.0, hit RTM today! Visit the downloads page to install the release build. The F# components in VS 2015 map to commit dd8252eb8d20 in our repo.

For an overview of the new language, runtime, and IDE features in Visual F# 4.0, take a look at our earlier blog posts from VS 2015 preview and RC, or review the VS 2015 release notes.  For a complete list of bug fixes and changes, see CHANGELOG.md.

Thank you to our contributors

Visual F# 4.0 marks the first major-version release of the F# language and VS tools to include community contributions.  As such, we offer a heart-felt “thank you!” to all of the F# community developers who contributed code, opened issues, or dogfooded early builds. 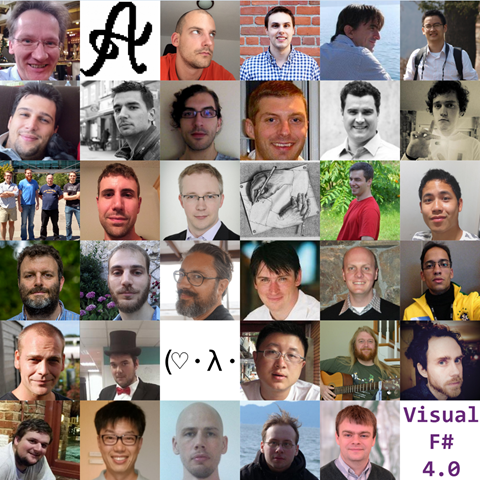 F# 4.0 is as much about a change in culture for the language as updates to the language specification, library and tools.  There are numerous new technical features, but in many ways the most significant changes are in how we have extended the core library, and how we’ve changed the way we are doing language design, implementation and delivery.

Language design is now done in an open, collaborative way through fslang.uservoice.com.  Language implementation has shifted to a fully open mode of engineering, and language delivery is shifting to be much more cross-platform and multi-editor. All of this is done by a range of contributors, including Microsoft, Microsoft Research, F# Software Foundation members and many more.

Help us make F# and the Visual F# tools the best functional-first, data-centric, highly-productive language and toolset it can be! Contribute at https://github.com/microsoft/visualfsharp, make suggestions at http://fslang.uservoice.com/ or http://visualstudio.uservoice.com, or follow us on Twitter at @VisualFSharp for the latest news and updates.

For a quick preview of some of the new capabilities in Visual F# 4.0, check out this Channel 9 video.

Jeffrey Fritz
July 23, 2015
0 comment
Announcing Availability of ASP.NET 5 beta 6
It feels like we just did this… we just announced an ASP.NET release, and here comes another one.  The development team has been hard at work right through the release...