Today, we are happy to announce the availability of Microsoft .NET Framework 4.5 and Visual Studio 2012. You can develop apps that will take advantage of all the great features that we have added, including new features in Windows 8. We are also announcing the availability of the .NET Framework 4.5 reference source code, under the Microsoft Reference Source License (MS-RSL).

Improvements in the .NET Framework 4.5

We have made many improvements in the .NET Framework 4.5. Many of these advances help you write better apps with less effort, while others help you target particular Microsoft platforms. In either case, you’ll find the new features useful and relevant for the apps that you write today.

Releasing the source code for the .NET Framework 4.5 libraries

If you are new to developing with the .NET Framework, you may not know that we have released the source and rich symbols in past versions. We know that many developers rely on our source code to efficiently get to the root cause of functional and performance problems in their apps. As a result, we provide the source code concurrently with the release of .NET Framework 4.5.

This release includes the following:

We’ll now look at how you can use the source code and symbols.

You may be wondering what debugging with .NET Framework reference source looks like. In the example below, you will see a tool of mine calling the public Console.WriteLine method. From there, the WriteLine method calls several private managed APIs, and eventually ends with one or more platform invoke calls. You can see each of these calls in the Call Stack window. You can look at each call frame, both in terms of the source for that frame, and any locals that are available. That’s pretty useful! 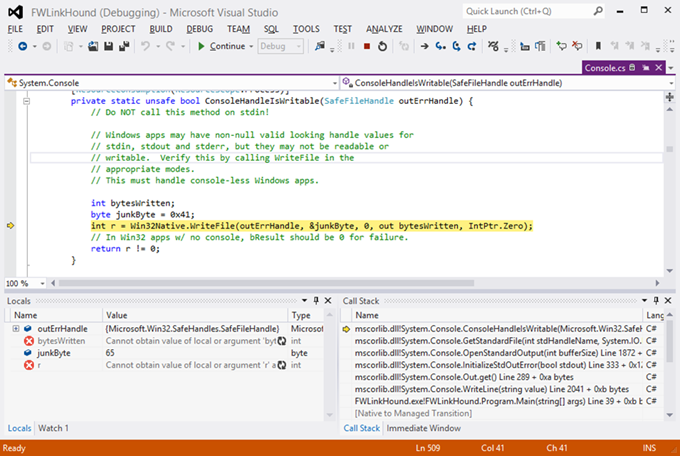 This experience works for 32-bit and 64-bit apps on x86 and x64 machines, as appropriate. It also works when running on either an x86 or x64 machine, while remote debugging an app that is running on an ARM tablet. I can imagine that you might be looking forward to giving that last scenario a try.

This experience also works for all .NET Framework app types, including ASP.NET, WPF, Windows Forms, console, and Windows Store apps. We call this experience of seeing .NET Framework library source in Visual Studio, “.NET Framework source stepping.” As you might guess, you can step in and out of .NET Framework code, using all of the stepping commands that you are used to, such as F11, F10, and Shift+F11. It’s pretty easy to set this up. I’ll explain how.

We’ll first start with the instructions for enabling source and symbols download on demand. This mode works the best if you have consistent Internet access. You need to make a few configuration changes in Visual Studio 2012.

First, open the Options dialog box by choosing Options and Settings… from the Visual Studio Debug menu, expand the Debugging node, and then choose the General option. Set the following: 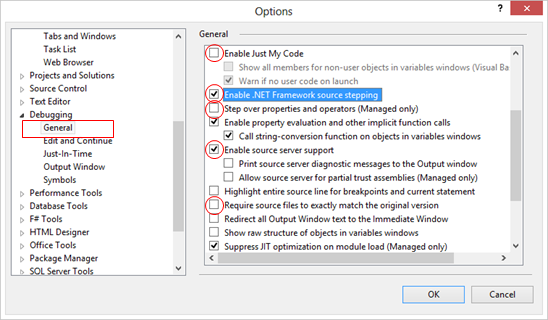 Next, set the following on the Symbols page which is also under the Debugging node: 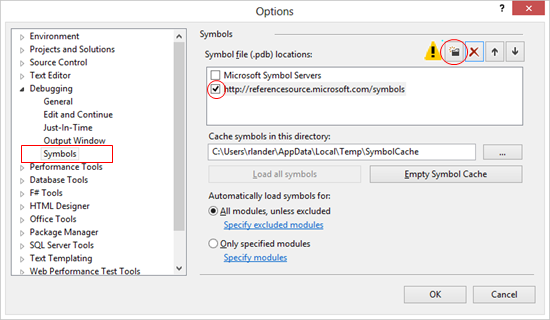 You can now choose OK, and start using .NET Framework source stepping as part of your development process.

There are times when you don’t have a connection to the Internet, for example, when you’re traveling. Also, some people prefer to pay the download cost just once, and then not think about it again. We’ve got both of those cases covered.

You can download the source and symbols for the .NET Framework 4.5 as an MSI installer. Once you’ve installed them to a particular location on your local disk or network, you need to provide a symbol file location that’s different from what we’ve specified in the previous section. I’ve provided an example below. 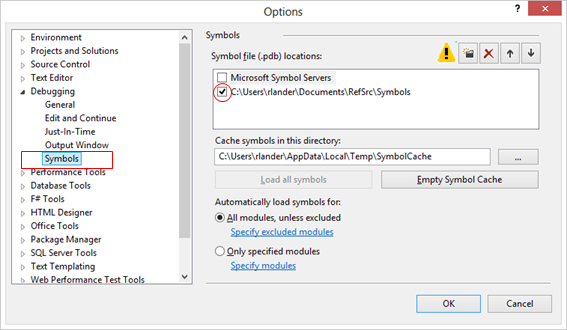 Once you have the offline reference source package installed and configured (as shown above) in Visual Studio 2012, you are ready to start stepping into .NET Framework library source.

You can learn more about reference source at the Microsoft Reference Source Code Center.

As always, we would like to hear from you. Please don’t hesitate to post a comment on the blog or at one of the forums that we monitor: Connect (report bugs), UserVoice (request features), and MSDN Forums (ask for help).

Web Development Tools Microsoft
August 15, 2012
0 comment
More info on publish links in Visual Studio 2012
Within the web publishing tools in Visual Studio there are a few places where we point to more resources. For example if you open a VS publish profile (.pubxml) file you ...