Symbols are a fundamental requirement for debugging and other diagnostic tools. Fortunately in most cases when you are building and launching your application in Visual Studio you don’t have to think about symbols for your code. However the odds are that at some point in time you’ll need to change how symbols load, where the debugger looks for them, or will need to load symbols for a 3rd party component (e.g. Windows or .NET libraries). Additionally because symbols are so fundamental to debugging, we continue to make tweaks to the experience so understanding the ins and outs of how Visual Studio behaves can save you hours of frustration.

In this blog post I’ll walk you through what symbols are and how to configure Visual Studio’s symbol settings (which are used by other diagnostic tools beyond the debugger such as the performance tools and IntelliTrace), the various knobs available when debugging, and how to trouble shoot issues when Visual Studio isn’t able to find the symbol files that you need.

Before we delve into the details of symbol files it’s important to briefly review what symbols are and why they are important:

Before we look at any of Visual Studio’s advanced settings it’s important that I stop and review the default behavior (meaning if you never touch a setting how will it behave):

How can I tell if a symbol is loaded and if not why?

The screenshot above (with the hollow breakpoint) shows a situation where symbols didn’t load for a source file you are trying to set a breakpoint in. The other ways to determine if symbols are loaded:

Additionally the debugger can tell you why it didn’t load symbols and where it searched for them. To see this information, open the Modules window, right click on a module and choose “Symbol Load Information…”

This will display a box that shows you all the paths the debugger searched for the symbol file. 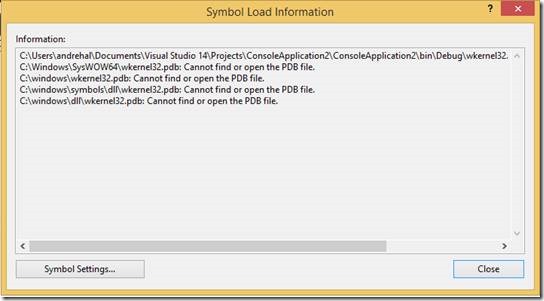 Now that you understand what symbols are, and how to determine if they are loaded let’s look at how you configure Visual Studio’s symbol settings. To access symbols settings, go to the “Debug” menu and choose “Options…” (“Options and Settings…” in previous versions of Visual Studio), and then select the “Symbols” sub page 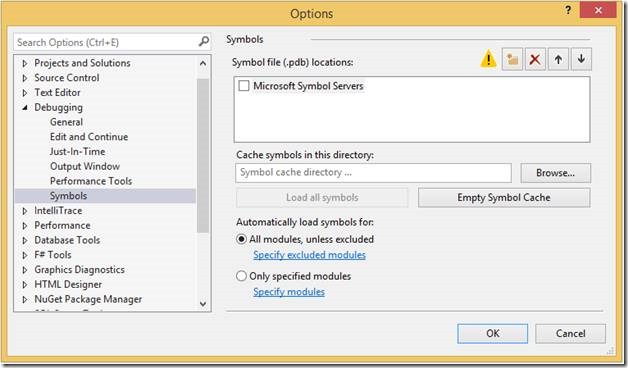 You’ll notice the following settings on the page:

If you are building and debugging your application from Visual Studio this option likely won’t apply to the symbols for your modules, but remote symbol locations (or symbol servers) are used to load symbols in situations where you need a 3rd party symbol file (e.g. one from Microsoft), or you are working in an environment where you may not have the symbols on your local machine (e.g. your application is built using a build server.  If you are using TFS read about how to add symbol and source archiving support).

The symbol file location box tells the debugger where to look for symbol files, these can be http symbol servers (e.g. the prepopulated “Microsoft Symbol Severs” entry), network shares, or folders on your local machine

This button is only enabled while Visual Studio is in debug mode, and clicking it will tell the debugger to try to load symbols for all modules in the process. 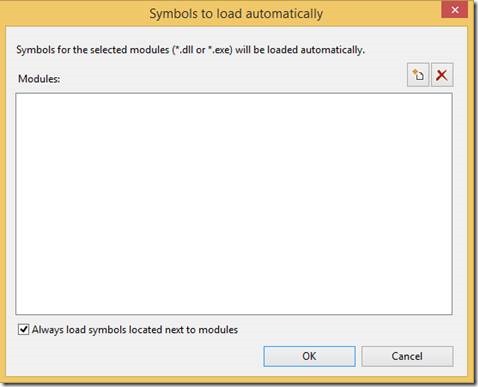 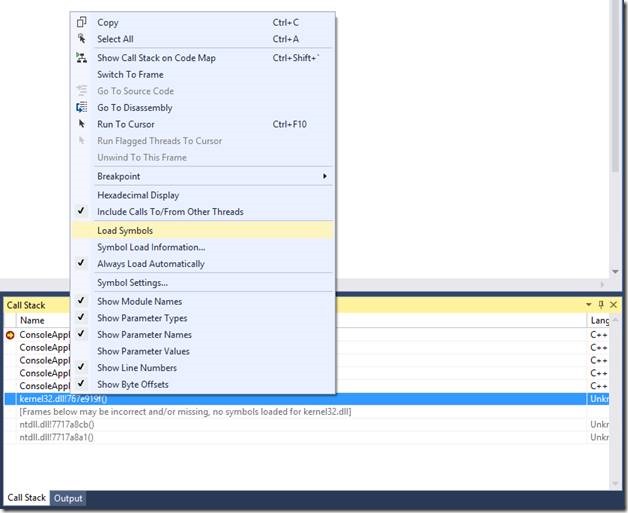 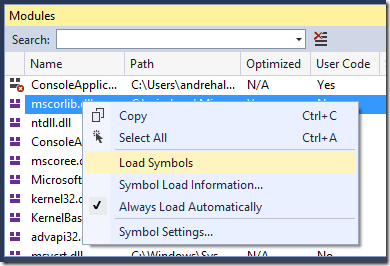 It is worth calling out that “Only specified modules” is my and many of the Visual Studio team’s preferred setting when debugging. The reason for this is:

Keeping track of symbols and configuring your settings correctly and for optimal performance can be quite complicated. Hopefully the above content helps you understand the settings available to you. However if you run into issues I did not cover, or have any other feedback you’d like to share, please let me know below, through Visual Studio’s Send a Smile feature, or in our MSDN forum.