You might want to use the Visual Studio Modeling SDK if you have one of these requirements:

The Modeling SDK changed its name several times during the last ten years: starting from the ‘DSL Tools’ in 2007, it grew to become ‘Visualization and Modeling SDK’ (VSVm SDK) in 2010. At that time, the SDK also contained UML extensibility. Finally, the name was a bit long and therefore it was shorted to ‘Modeling SDK’ in 2012. With previous versions of Visual Studio, regardless of its name, we used to release the Modeling SDK as a separate download.

How to install the components of the Modeling SDK?

Previously, the DSL Tools, T4 SDK and Code Index SDK were all shipped as part of the Modeling SDK.

In VS2017, the T4 SDK is installed with the T4 runtime as part of the Text Template Transformation optional component, which is itself installed by default with many Visual Studio workloads

The DSL Tools and Code Index SDK are installed as part of the DSL tools optional component (the component will be renamed to the Modeling SDK in a future Visual Studio RC update, as this is the name under which you have known it for several years). you can find this component in the Visual Studio Extension development workload in every edition of Visual Studio 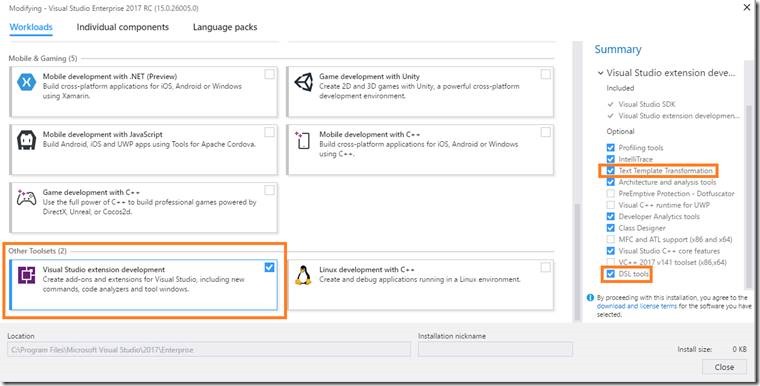 For the next update of Visual Studio 2017 RC we are slightly improving the experience:

You want to know more?

You can find more information on these features:

Matt Cooper
December 12, 2016
0 comment
SonarSource have announced their own SonarQube Team Services / TFS integration
Microsoft have been partnering with SonarSource for almost two years to bring SonarQube to .NET developers and to make it easy to analyze MSBuild and Java projects from ...