Welcome to Let’s Hack a Pipeline! In this series of posts, we’ll walk through some common security pitfalls when setting up Azure Pipelines. We don’t really want to get hacked, so we’ll also show off the mitigation.

A quick note before we begin: security is a shared responsibility. Microsoft tries very hard to set safe, sensible defaults for features we deliver. Sometimes we make mistakes, and sometimes threats evolve over time. We have to balance security with “not breaking people’s things”, especially for developer tools. Plus, we can’t control how customers use the features we build. The purpose of this series is to teach the problems, which we hope helps you avoid them in practice.

Here’s a pretty standard pipeline for running a build tool like MSBuild. We’ve left out common steps like “restore NuGet packages” and “run tests” to focus on the vulnerable step.

Now, there’s nothing really MSBuild-specific about this attack. It’s a convenient target since it accepts so many parameters and inputs, but I could do this with basically any tool. Two of those inputs are variables stored with the pipeline: platform and configuration.

Normally these would be values like x64 and Release. They’re editable at queue time in case someone wants to run a different flavor, like x86 and Debug. At runtime, Azure Pipelines interpolates the script step with the values of variables surrounded by $( ). The MSBuild command becomes: msbuild App1.sln /p:platform="x86" /p:configuration="Release".

I’m not limited to Release and Debug as options. When I queue the pipeline, I can put pretty much whatever I want into those variables. Like:

By setting configuration to Debug" & echo Villain was here > file.txt &::, I make the MSBuild command read:

That line says “run MSBuild, then write some stuff to a file, then skip the rest of the line”. (The double colon is used to comment out the trailing double-quote the base script contains.)

OK, this payload is not very sophisticated. A lot of them initially aren’t. But I bet you can dream up something more nefarious to do than leaving a calling card.

Much like SQL injection, the attacker abused what should have been an argument to the desired function. The attacker completed the argument prematurely (the Debug" part – note the ") and added an additional command. Once Azure Pipelines interpolated the variables, the script was perfectly legal but malicious.

Azure Pipelines variables are strings. Since they can be used for a variety of purposes, the system can’t quote, escape, or otherwise mangle them. That must be arranged by the code accepting the input.

There are two ways to mitigate this problem:

The general and preferred option is to use runtime parameters. You can limit runtime parameters to certain, expected values. When someone queues the build, their options are constrained and they can’t write an argument injection attack. 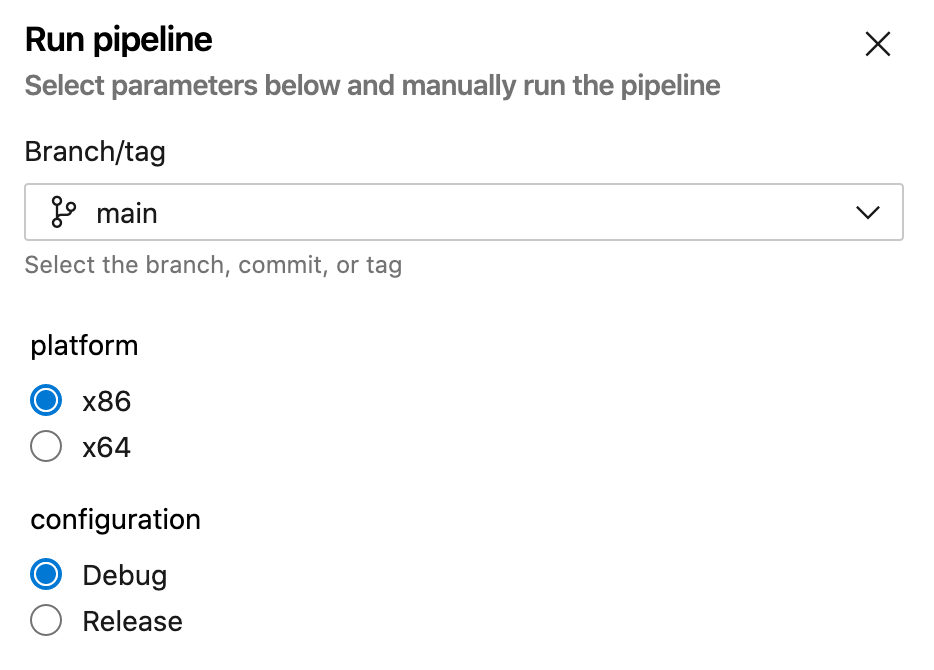 In other scenarios, runtime parameters offer even more help. They have data types like number and boolean. This is helpful when an argument expects only integers, for example.

If you’re a task author and want to see how we do this in the built-in tasks, take a look at the MSBuild task and its helper code.

Queue-time variables offer no quoting, escaping, or guarantees about their contents. A malicious person with the right to queue builds can inject their own commands into script arguments or vulnerable tasks.

Use runtime parameters to limit what inputs will be accepted. For additional protection, use purpose-built tasks which properly escape (or reject) malicious inputs.

Top Stories from the Microsoft DevOps Community – 2020.08.21
Happy Friday! This week, thanks to our great community content, you can improve your productivity with YAML pipelines while working in VS Code and explore several different uses of Azure Pipelines!

Steven Murawski
August 21, 2020
1 comment
Let’s Hack a Pipeline: Stealing Another Repo
We're back with another Let's Hack a Pipeline. Last time, we saw how to create - and prevent - argument injection. In this episode, we'll look at how a malicious user ...