Before presenting the new experience, let me first recap what the experience is in previous versions of Visual Studio Enterprise (Layer diagrams).

The screenshot below shows Visual Studio 2015 Update 3, where a layer diagram expresses the allowed dependencies between four layers. The blue rounded rectangles are layers associated with code elements; for example, here they represent assemblies, but they could be any set of code elements. The arrows express the permitted dependencies. You can also express additional constraints on each layer related to namespaces. For example, a property “Forbidden Namespace Dependencies” here indicates that the UI layer (selected on the diagram) should not depend on Owin (in the property window). 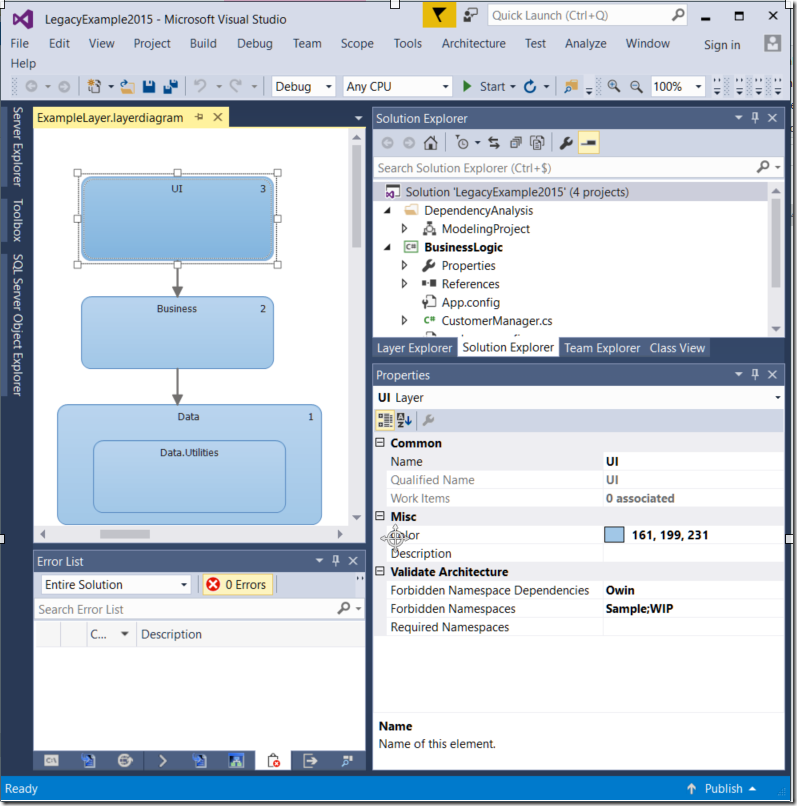 Validating the architecture before VS Dev “15”

To validate the architecture, you could either right-click on the diagram and chose “Validate Architecture”, or do the validation at build time. The former obliged you to remember to do it. The latter automatically catches architecture regressions during continuous integration.

This could be improved

To summarize a little: although this feature has existed for a while, it could definitively be improved:

Room for improvement in the authoring experience

Room for improvement in the developer experience 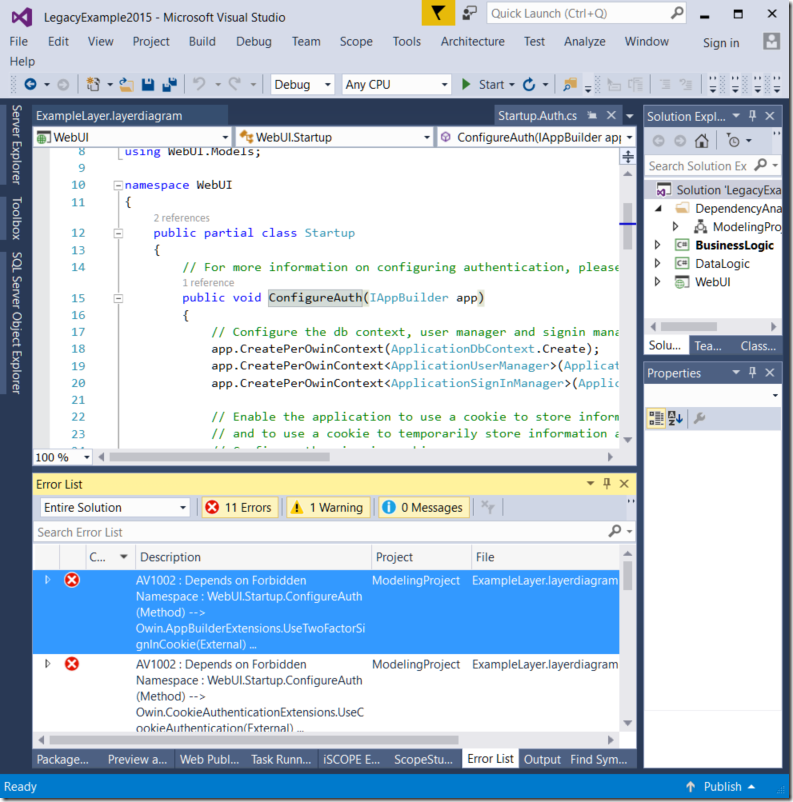 The new “Dependency Validation” developer experience in VS “Dev15”.

Now that we share a common understanding of the gaps in the previous experience, let’s have a look at what is coming in Visual Studio “15”. We have been rethinking architecture dependency validation, and a first step is providing live validation. We’ve done this by re-implementing the validation logic as Roslyn analyzers that work against source code, provide precise information about issues, and benefit fully from the new features in the Error list and the editor.

When you open in Visual Studio Enterprise “Dev15” a solution that you created with a previous version of Visual Studio, you will see a gold bar in the Solution Explorer, telling you that you can benefit from live architectural validation. 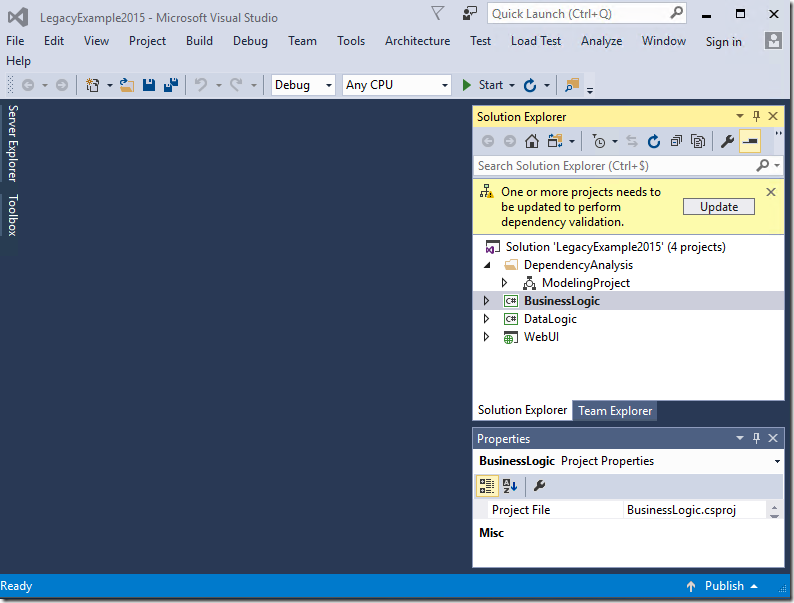 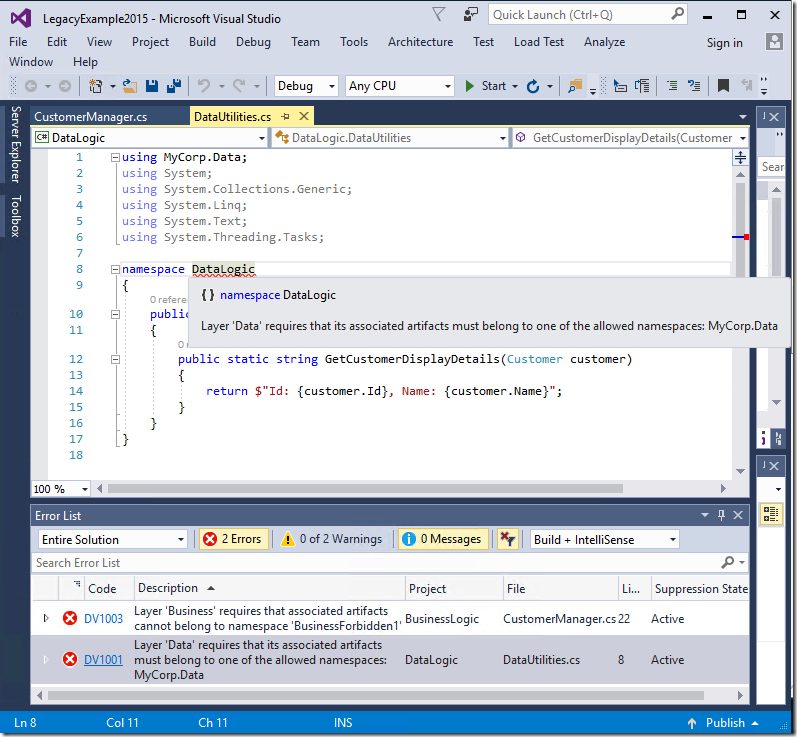 As with all Roslyn analyzers, these validation errors will appear immediately you introduce unwanted dependencies, and go away as you fix the code. Note that you no longer get a “somewhere in this method” error. Instead, erroneous code is precisely identified by squiggles in the editor, indicating what you need to change, with explanations in a tooltip.

Because we are now using the Roslyn framework, you should find the whole experience more familiar and consistent. You automatically get a better filtering experience in the Error List, and you are also able to manage the rules using rulesets – deciding on their severity, for example – and can manage violations using the standard suppressions mechanism.

What about the dependency validation authoring experience?

We have also changed the authoring experience to make it more discoverable and more accessible, changing the terminology from “Layer Diagram” to “Dependency Diagram”. 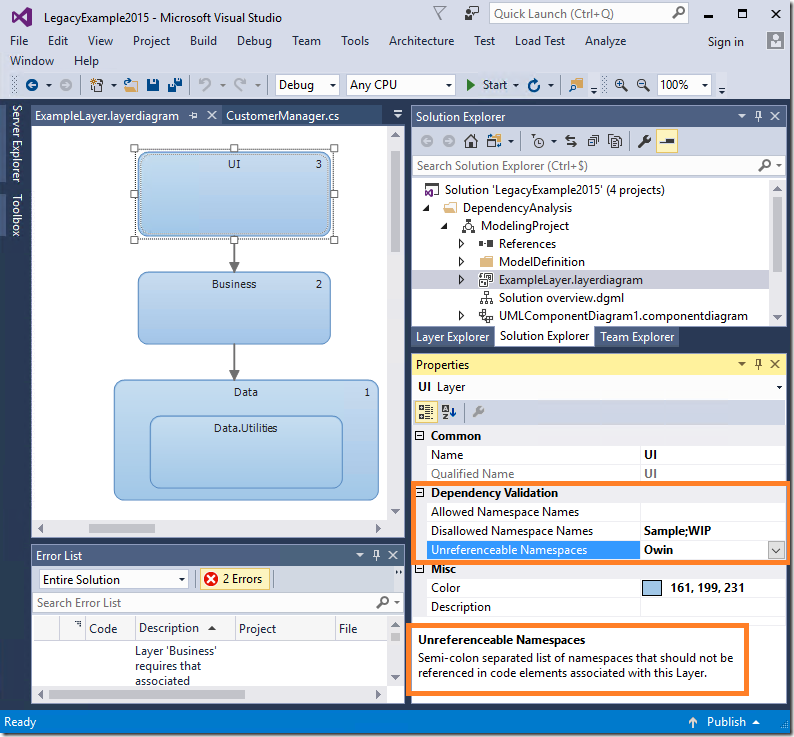 You can try this experience now. What we released in VS “15” Preview 5 is a start, and we have more work to do, but we hope this will give you an idea of where we are heading.

Some particular issues to be aware of in Preview 5 that will be fixed before the final release are:

As usual we’d love to hear your feedback. Don’t hesitate to send feedback directly from Visual Studio (Help | Send Feedback) to report a problem or provide a suggestion.

Adity Agarwal October 8, 2016
0 comment
Tracking branch health and identifying flaky tests in RM driven test automation
In my previous blog post, I had written about how we have a single Release Definition for our team which runs all the test environments in parallel.  Now that ...