We recently engaged with Miroculus, a startup working in the medical space. Miroculus develops affordable and quick blood tests for the early detection of diseases by detecting levels of microRNAs in a patient’s blood.

As part of their solution, Miroculus attempts to identify if certain miRNAs are related to a certain gene or disease. Based on this data they can create and continually update a tool that lets researchers quickly explore the links between miRNA, genes and their relationship to types of disease (such as cancers). While the medical literature contains many research papers regarding the correlation between certain miRNA, genes, and diseases, there is no one centric database that hold that information in an ordered and structured format.

In our project, we focused on the problem of identifying whether there is a relation between miRNAs and genes by analyzing scientific medical documents. Although there could be different type of relations between miRNA and genes, due to the paucity of data, the relation extraction problem was reduced to binary classification of identifying whether the miRNA and gene are related.

Since we are dealing with binary classification, we would like to build a classifier that will be given a sentence and a pair of entities and will output a score in the range of 0-1, which represents the probability of the two entities being related.

The source code for this project, can be found in: https://github.com/CatalystCode/corpus-to-graph-ml.

In the following post, we will describe the different tasks and items that are needed in order to build a relation classifier:

We used the text of medical articles from two data sources: PMC and PubMed. The text of the papers downloaded from those data sources was then splitted into sentences using the TextBlob library. And each sentence was given as an input to an entity recognition tool, called GNAT in order to extract the names of the miRNAs and genes that appear in the sentence.

One of the most fundamental challenges in the task of relation extraction (or in any machine learning base task), is the existence of labelled data. For our project, no such data was available for us. Luckily, however, we were able to use an approach called “Distant Supervision”.

For every pair of entities and a relation from the entities DB, we labeled all of the sentences from the articles DB that contain the entities with the label of the relation.

In order to generate negative samples (that represents no relation), we randomly sampled sentences with entities that do not appear in the relations DB. It’s worth noting that the major caveat of distant supervision is the possible inaccuracy of the negative samples, as we can expect some of the random sampled data to have false negatives. 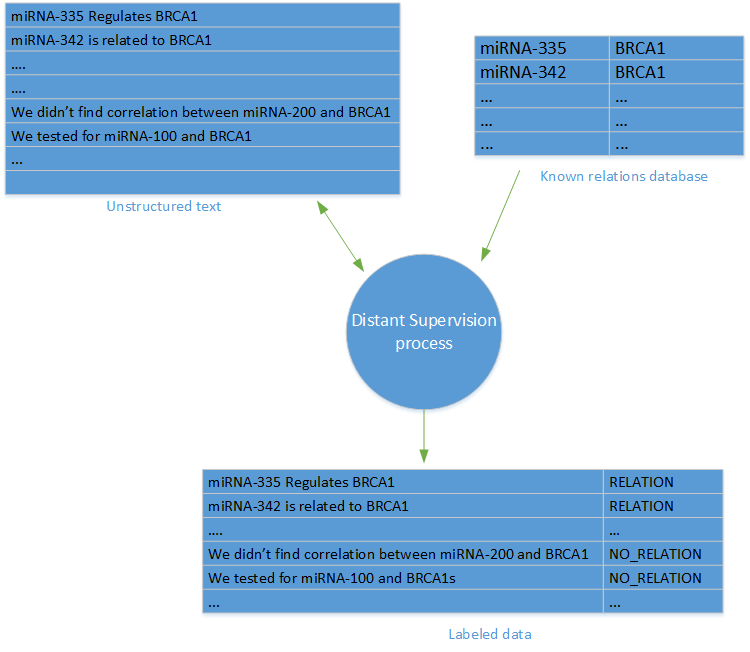 After we created the labeled training set, we built a relation classifier using scikit-learn Python library, using several NLP based python libraries. We experimented with several possible features and classifiers.

Before trying out several approaches and features, we run the data through a text transformation pipeline, which consists of the following parts:

Will be transformed to:

In practice, we took all pairs of entities in every sentence, and for each pair we replaced the entities in question with place-holders, with ENTITY1 always being a replacement for a miRNA, and ENTITY2 being a replacement for a gene. We used another special placeholder to mark entities that are part of the sentence but are not part of the relation in question.

So, for the following sentence:

We obtained the following set of transformed sentences:

This step can be easily implemented by the python string.replace() method in order to replace the entities, and by the itertools.combinations or itertools.product methods in order to walk through all of the possible combinations.

Tokenization is the process of splitting up a sequence of words into smaller segments. In our case, splitting up the sentence into words. We used the nltk library in order to do that:

Following the best practices in the literature, we have trimmed down each sentence to a smaller segment that contains the 2 entities, the words between the entities, and a few words before and after. The purpose of the trimming operation is to remove the parts of the sentence that aren’t relevant to the relation extraction.

In order to do that – we sliced the tokenized array of words from the previous step with the appropriate indices:

We normalized the sentences by simply transforming them to lower case. While casing might actually be of value in tasks like sentiment or emotion analysis, it does not play a role in relation extraction, since we are interested in the information and the structure of the text and not on the emphasis of the different words in the sentence.

Here, we use the common process of removing stop words and digits from the sentence. Stop words are words that occur very often, such as “to” or “is”. As these words occur very often, they do not add much information regarding the relation between the entities in the sentence. For the same reason, we also removed tokens that consisted only of digits, and short token that had no more than 2 characters.

Stemming is the process of reducing a given word to its root form. As a result, it reduces the size of the word space, and let us focus on the actual meaning of the word. In practice, we did not find this part to be beneficial for us in terms of accuracy improvements. Because of that and due to the relatively low performance of the process (in terms of run-time), stemming was not included in the final model that was used.

Normalization, words removal and stemming are easily implemented by iterating through the tokenized and trimmed sentence, normalizing and removing words as needed:

The Bag-of-words model (or just BOW) is a very common and popular method used in NLP based tasks to transform texts into a numerical vector space.

In the BOW model, each word in our vocabulary is assigned to a unique numerical Id. Each sentence is then transformed to a vector in the size of the vocabulary. A position in the vector has the value 1 in case that the word with that id is in the text, or 0 otherwise. An alternative approach is to have each item in the vector hold the number of occurrences for the word in the text. See an example – here.

However, the model described above does not take into account the order of the different words in the sentence, but only the occurrence of each word separately. In order to incorporate the order of the words into the model, we use the popular n-gram model approach, which looks at consecutive words series of length n and treat each series of size n as a different word.

For more information about using n-grams for text analysis, please refer to: “Feature Representation for Text Analyses: 1-gram, 2-gram, 3-gram, but just how many?”.

Luckily for us, the BOW and n-gram models are implemented in scikit-learn by the CountVectorizer class.

The following example transforms the given text to a 1/0 BOW representation with a 3-gram model:

We have chosen to use https://spacy.io in order to extract both POS tags and dependency graphs, as it seems to outperform existing python libraries in terms of speed with accuracy which is comparable to other NLP frameworks.

The following code snippet, will extract the POS for a given sentence:

After transforming each sentence, we can use the CountVectorizer object described above and use a similar Bag-Of-Words model for the POS tags in order to transform them to a numerical vector space.

A similar approach was used for the dependency parse tree features, for which we looked at the path between the 2 entities for each sentence, and transformed it using CountVectorizer as well.

A recent popular approach in NLP problems is that of word embeddings. The gist of the method is to use neural models in order to transform word to feature space such that similar words will be represented by vectors with small distance between one another.

(Check out this blog post for more information about word embeddings)

We followed the approach presented in Paragraph Vector, which embeds sentences (or documents) in high dimensional feature space. We used the Doc2Vec implementation of the Gensim library. We recommend following this tutorial for more information.

Both the parameters and the size of the output vectors that were used followed the best practices from the Paragraph Vector paper and the Gensim tutorial.

Note that in addition to the labeled data, we also used in our Doc2Vec model a large bunch of additional unlabeled sentences in order to provide more context to the model, and enrich the language and features that the model learns.

After building the model, each sentence was represented by a 200 dimensional vector that can be easily used as an input to the classifier.

Once the text transformations and feature extraction are completed, the next step is to select, and then evaluate our classification model.

Before starting to evaluate the accuracy of the method, we first need to split our dataset into a training set and a test set. This is done easily using the train_test_split method:

This will split the data set randomly, with 75% of the data split to the training set and 25% to the test set.

A sample output of the code snippet above will look something like this: “`python

Note that the C parameter (which stands for the regularization strength) is chosen arbitrarily for this example, but should be tuned using cross validation, as mentioned below.

We combined all of the methods and techniques described above and compared the different features and transformations in order to choose the model that works best for us.

We have used the LogisticRegressionCV class to build a binary classifier with tuned parameters, and then evaluated a different test set in order to evaluate the model performance. Note that for testing different parameters of different features easily, you can use the GridSearch class.

The table below lists the top results of comparing the different features that we’ve tried. We have used the F1-Score as an accuracy measurement for our model, as it captures both the accuracy and the recall of the model.

In general, it seems that using Bag-Of-Words of 1-to-3 n-grams prevails over the other approaches and achieves the best accuracy. While the Doc2Vec model seem to excel at tasks like words similarity, it does not perform as well for relation extraction.

In this post, I presented the approach that we took for building an entity relation classifier for relations between miRNA and genes.

While the problem and examples shown here are related to the biological domain, the solution and approaches mentioned above can be applied to other domains in order to build a graph of relations using unstructured textual data.