Due to logistical issues we couldn’t get FH4 turned default on in Update 1. Everything looks in place to have FH4 default on in an early preview of Update 2 *fingers crossed*.

In addition, as Paul reported in the comments below in the Visual Studio 2019 RTM release the new runtime wasn’t being properly installed into system32 with just the Visual Studio installation. That was a general bug in RTM that we’ve since fixed in Update 1, for RTM please run “C:\Program Files (x86)\Microsoft Visual Studio\2019\Enterprise\VC\Redist\MSVC\14.20.27508\vc_redist.x64.exe” to install the runtime on any machine you plan on running binaries using FH4.

We discovered that hooks used for debugging were missing in the runtime for FH4. This causes debugger only issues where “step-into” from a throw no longer goes into the corresponding catch and a “step-into” out of the catch no longer goes to the next line in the normal execution path (instead they both go to the next breakpoint/end of program). This has been fixed for 16.2 but due to UWP library turn-around could not make it in time for UWP runtimes in 16.2. Given that, it was decided to not push FH4 default-on in 16.2 with this known issue but wait for 16.3 where everything will line up. Preview 1 of 16.3 which GA’ed yesterday does have FH4 on by default with the plan to keep it on moving forward.

How Do I Turn This On?

FH4 is currently off by default because the runtime changes required for Store applications could not make it into the current release. To turn FH4 on for non-Store applications, pass the undocumented flag “/d2FH4” to the MSVC compiler in Visual Studio 2019 Preview 3 and beyond.

We plan on enabling FH4 by default once the Store runtime has been updated. We’re hoping to do this in Visual Studio 2019 Update 1 and will update this post once we know more.

Any installation of Visual Studio 2019 Preview 3 and beyond will have the changes in the compiler and C++ runtime to support FH4. The compiler changes exist internally under the aforementioned “/d2FH4” flag. The C++ runtime sports a new DLL called vcruntime140_1.dll that is automatically installed by VCRedist. This is required to expose the new exception handler __CxxFrameHandler4 that replaces the older __CxxFrameHandler3 routine. Static linking and app-local deployment of the new C++ runtime are both supported as well.

Now onto the fun stuff! The rest of this post will cover the internal results from trialing FH4 on Windows, Office, and SQL, followed by more in-depth technical details behind this new technology.

About a year ago, our partners on the C++/WinRT project came to the Microsoft C++ team with a challenge: how much could we reduce the binary size of C++ exception handling for programs that heavily used it?

In context of a program using C++/WinRT, they pointed us to a Windows component Microsoft.UI.Xaml.dll which was known to have a large binary footprint due to C++ exception handling. I confirmed that this was indeed the case and generated the breakdown of binary size with the existing __CxxFrameHandler3, shown below. The percentages in the right side of the chart are percent of total binary size occupied by specific metadata tables and outlined code. I won’t discuss in this post what the specific structures on the right side of the chart do (see James McNellis’s talk on how stack unwinding works on Windows for more details). Looking at the total metadata and code however, a whopping 26.4% of the binary size was used by C++ exception handling. This is an enormous amount of space and was hampering adoption of C++/WinRT.

We’ve made changes in the past to reduce the size of C++ exception handling in the compiler without changing the runtime. This includes dropping metadata for regions of code that cannot throw and folding logically identical states. However, we were reaching the end of what we could do in just the compiler and wouldn’t be able to make a significant dent in something this large. Analysis showed that there were significant wins to be had but required fundamental changes in the data, code, and runtime. So we went ahead and did them.

With the new __CxxFrameHandler4 and its accompanying metadata, the size breakdown for Microsoft.UI.XAML.dll is now the following: 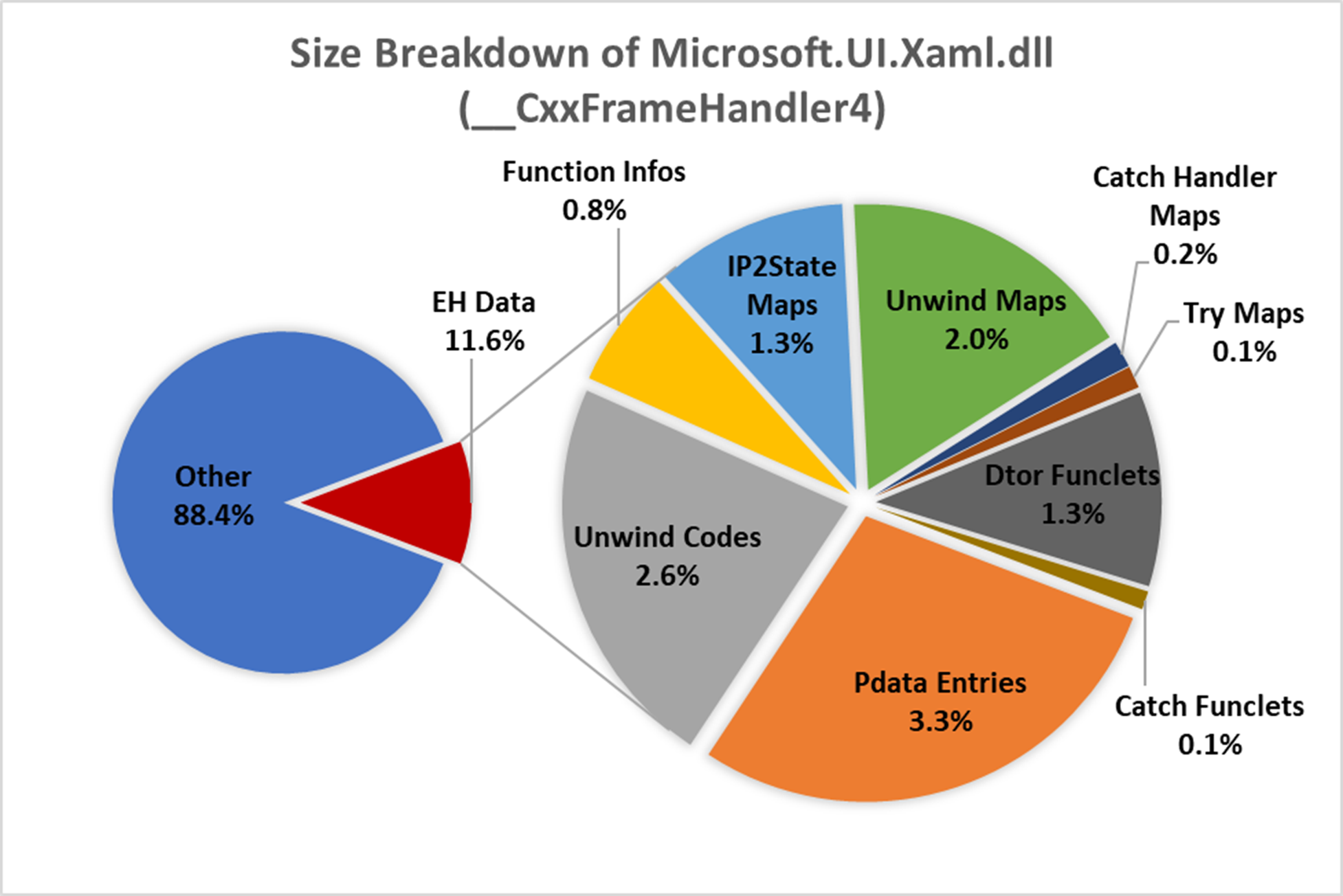 The binary size used by C++ exception handling drops by 64% leading to an overall binary size decrease of 18.6% on this binary. Every type of structure shrank in size by staggering degrees:

Combined, switching to __CxxFrameHandler4 dropped the overall size of Microsoft.UI.Xaml.dll from 4.4 MB down to 3.6 MB.

Trialing FH4 on a representative set of Office binaries shows a ~10% size reduction in DLLs that use exceptions heavily. Even in Word and Excel, which are designed to minimize exception usage, there’s still a meaningful reduction in binary size.

Trialing FH4 on core SQL binaries shows a 4-21% reduction in size, primarily from metadata compression described in the next section:

When analyzing what caused the C++ exception handling data to be so large in Microsoft.UI.Xaml.dll I found two primary culprits:

To address these issues, FH4 restructures the metadata and code such that:

To illustrate this, let’s look at the original definition for the Function Info metadata table used for __CxxFrameHandler3. This is the starting table for the runtime when processing EH and points to the other metadata tables. This code is available publicly in any VS installation, look for <VS install path>\VC\Tools\MSVC\<version>\include\ehdata.h:

This structure is fixed size containing 10 fields each 4 bytes long. This means every function that needs C++ exception handling by default incurs 40 bytes of metadata.

Now to the new data structure (<VS install path>\VC\Tools\MSVC\<version>\include\ehdata4_export.h):

Taking all this into account, the average size of the new “Function Info 4” structure is now 13 bytes (1 byte header + three 4 byte image relative offsets to other tables) which can scale down even further if some tables are not needed. The lengths of the tables were moved out, but these values are now compressed and 90% of them in Microsoft.UI.Xaml.dll were found to fit within a single byte. Putting that all together, this means the average size to represent the same functional data in the new handler is 16 bytes compared to the previous 40 bytes—quite a dramatic improvement!

For folding, let’s look at the number of unique tables and funclets with the old and new handler:

The number of unique EH data entries drops by 48% from creating additional folding opportunities by removing RVAs and redesigning catch funclets. I specifically want to call out the number of catch funclets italicized in green: it drops from 2,603 down to only 84. This is a consequence of C++/WinRT translating HRESULTs to C++ exceptions which generates plenty of code-identical catch funclets that can now be folded. Certainly a drop of this magnitude is on the high-end of outcomes but nevertheless demonstrates the potential size savings folding can achieve when the data structures are designed with it in mind.

With the design introducing compression and modifying runtime execution there was a concern of exception handling performance being impacted. The impact, however, is a positive one: exception handling performance improves with __CxxFrameHandler4 as opposed to __CxxFrameHandler3. I tested throughput using a benchmark program that unwinds through 100 stack frames each with a try/catch and 3 automatic objects to destruct. This was run 50,000 times to profile execution time, leading to overall execution times of:

Profiling showed decompression does introduce additional processing time but its cost is outweighed by fewer stores to thread-local storage in the new runtime design.

As mentioned in the title, FH4 is currently only enabled for x64 binaries. However, the techniques described are extensible to ARM32/ARM64 and to a lesser extent x86. We’re currently looking for good examples (like Microsoft.UI.Xaml.dll) to motivate extending this technology to other platforms—if you think you have a good use case let us know!

The process of integrating the runtime changes for Store applications to support FH4 is in flight. Once that’s done, the new handler will be enabled by default so that everyone can get these binary size savings with no additional effort.

For anybody who thinks their x64 binaries could do with some trimming down: try out FH4 (via ‘/d2FH4’) today! We’re excited to see what savings this can provide now that this feature is out in the wild. Of course, if you encounter any issues please let us know in the comments below, by e-mail (visualcpp@microsoft.com), or through Developer Community. You can also find us on Twitter (@VisualC).

Thanks to Kenny Kerr for directing us to Microsoft.UI.Xaml.dll, Ravi Pinjala for gathering the numbers on Office, and Robert Roessler for trialing this out on SQL.

Gratian Lup March 19, 2019
12 comments
Linker Throughput Improvement in Visual Studio 2019
In Visual Studio 2019 Preview 2 we made the compiler back-end to prune away debug information that is unrelated to code or data emitted into binary and changed certain ...