Use Configuration File to Apply PowerShell DSC to Multiple Servers

Microsoft Scripting Guy, Ed Wilson, is here. Hmmmm…I guess the Charlotte weather person does not know how to predict the weather in Germany. The Scripting Wife and I hopped aboard a train to Halle for a nice day of strolling the old town square, sitting in outdoor cafes, sipping tea, and taking pictures. Dude, it began to storm, so we decided to stay on the train and go somewhere else. That is the cool thing about a rail pass—especially when you have two batteries for your laptop and five devices in your backpack. It makes for a great day of writing and playing with Windows PowerShell.

I am listening to Bach today on my Zune, and we have a nice work table—so it is like having a window office. We are dry, and they have great tea and coffee service on the train. Anyway, I decided to fire up a bunch of virtual machines and play around with remotely configuring servers with DSC.

Note  Today is the sixth day in a series of blog posts about Desired State Configuration.

Today I talk about creating folders and SMB shares on multiple remote servers by using a configuration data file.

That may sound like a lot of steps—but really it is not, and they all go pretty quickly. The tricky part is making sure that I get the configuration data file correct, and that I correctly address the configuration by property name because tab expansion does not seem to work for this process.

Oh no…not a configuration data file. Dude, dude, dude! That sounds like it is going to be waaaaaayyyyy tooooooo complicated. OK. Maybe my reaction was not quite that bad, but it was nearly that bad. I mean, I have to pretty much hand type the thing, so it has to be tough. Right? Well, not necessarily.

There are two key points here:

Note  We have been working with hash tables in Windows PowerShell since before version 1 shipped. If you do not know about hash tables, stop and read my Hey, Scripting Guy! series about hash tables. But really, they are no more complicated than @{ propertyname = value }.

What do my remote servers need?

If I am going to create a number of file shares on remote servers, I need to have the following:

Each of these becomes an element in a hash table. The hash table is shown here:

Now, I said I have an array of hash tables. Therefore I have two more hash tables. These define the role of my server. In this instance, they are SMB, but I am making stuff up, so they could be DHCP servers, DNS servers, clustered servers, SQL Server servers, or whatever I want. I can then use Windows PowerShell to parse the Role information and really customize stuff. Here are my two hash tables:

That really and truly is about it. I have an array of hash tables. The complete configuration file is shown in the image that follows: 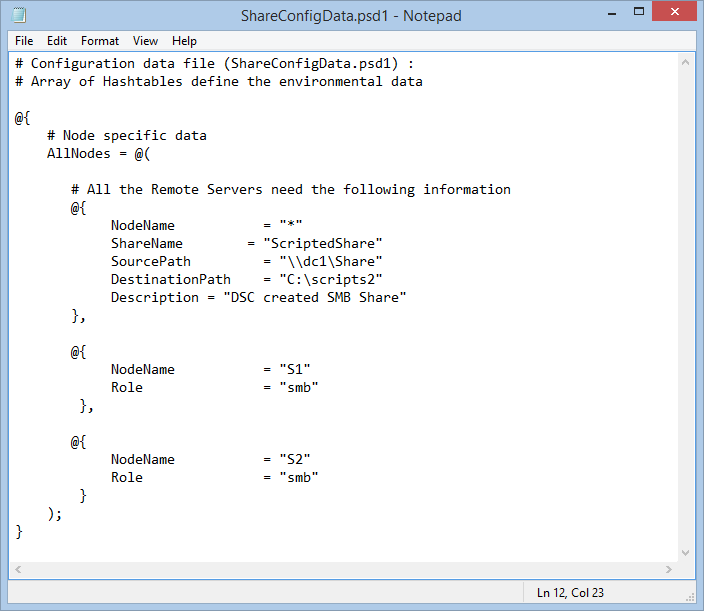 Inside my configuration, I need to import only a single DSC resource. This is because the File DSC resource is native to Windows PowerShell 4.0 DSC. The xSmbShare resource comes from the DSC Resource Kit Wave 2.

Now the really cool stuff comes into play. I do not need to specify a hard-coded node name. I can use the automatic $AllNodes variable to work with all nodes from the configuration data file. In the following command, I use the $AllNodes variable to address all the nodes. Then I use the simplified where syntax to filter with a script block for roles that are equal to SMB. Next, I return only the NodeName property.

When I run the script, it creates two MOF files, and then applies the DSC to the two remote servers. This is shown in the following image: 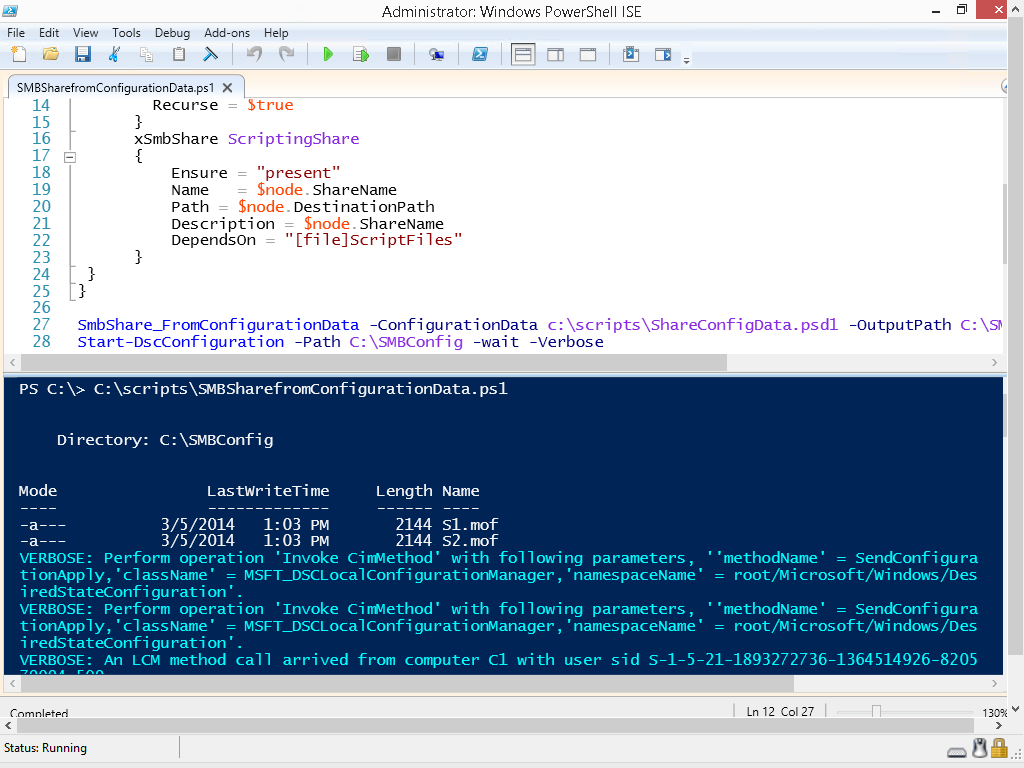 That is all there is to using a configuration data file to help to configure multiple remote servers using DSC. DSC Week will continue tomorrow when I will talk about more cool stuff.