Summary: The Scripting Wife interrupts Brahms to learn how to use Windows PowerShell to find service accounts and service start modes.

Microsoft Scripting Guy, Ed Wilson, is here. One of life’s real pleasures is sitting around a fireplace, listening to a Brahms concerto, and sipping a cup of chamomile tea. I like to add a bit of local honey, and drop in a cinnamon stick. So here I am…mellow and as relaxed as a cat lying in a bay window on a warm summer afternoon. The Charlotte SQL User Group meeting tonight will be awesome. We have not seen Chris Skorlinski (the speaker) since the Raleigh SQL Saturday, so we are excited to go. The Scripting Wife and I will have a great time, and it is nice chance to see some friends we have not seen for a while.

Anyway, now it is time for a warm fire, a little Brahms, and a cup of warm (but not boiling) tea. About to nod off, I was suddenly startled back into reality as the overhead light suddenly switched on.

“How can you see in here in the dark,” the Scripting Wife exclaimed.

“There was nothing to see—I was listening to Brahms,” I began.

“You need to turn that racket down. The neighbor’s dog is beginning to howl. I think he prefers Trace Adkins to that classical stuff anyway,” she continued, “As long as you are awake, I have a problem with a Windows PowerShell command.”

“I see. I think it is you who likes Trace Adkins.”

“Yep, but don’t sidetrack me with talk about Trace Adkins, I need to be prepared for the 2012 Scripting Games so I do not embarrass you or me. Now back to what I came to ask you. I am trying to figure out what account a service uses to start, and I don’t see it. “

“And nothing. I type Get-Service, and I do not see anything about service user accounts.”

“Show me your command,” I wearily asked.

“It is right here. Nothing hard…see?”

She plopped down beside me on the sofa and showed me her laptop. She had typed the single command shown here. 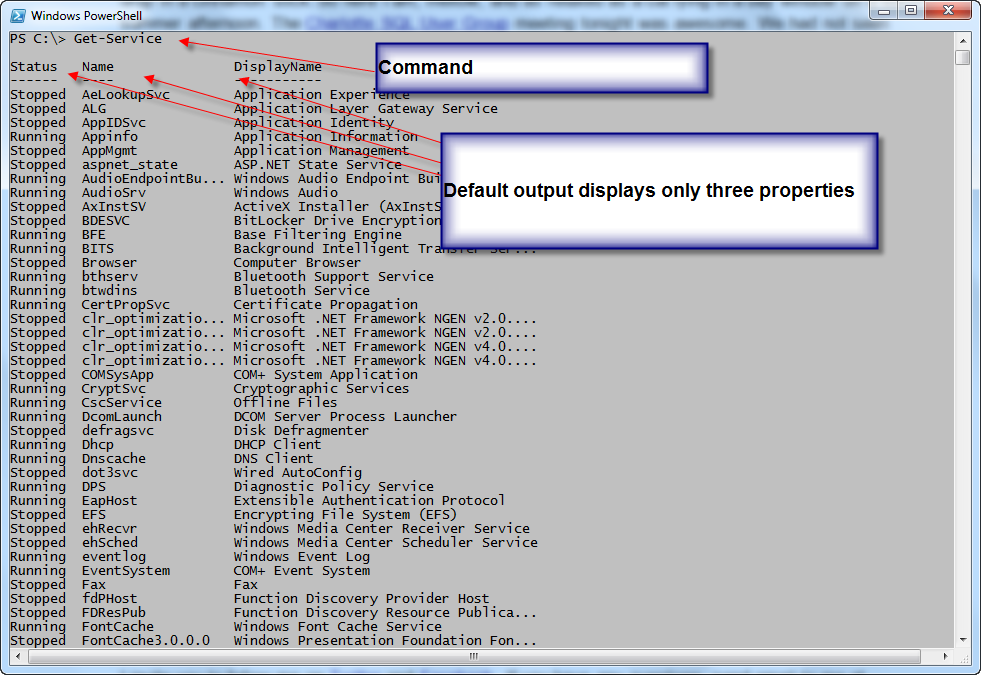 “You know that there is more information don’t you?” I asked.

“Well, duh,” she said. “OK, I will clear the screen and send the output to the Format-List cmdlet.”

Here is what the Scripting Wife did to clear the screen and to obtain all the information available from the Get-Service cmdlet.

The complete command is shown here.

The command and the associated output from the command are shown in the image that follows. 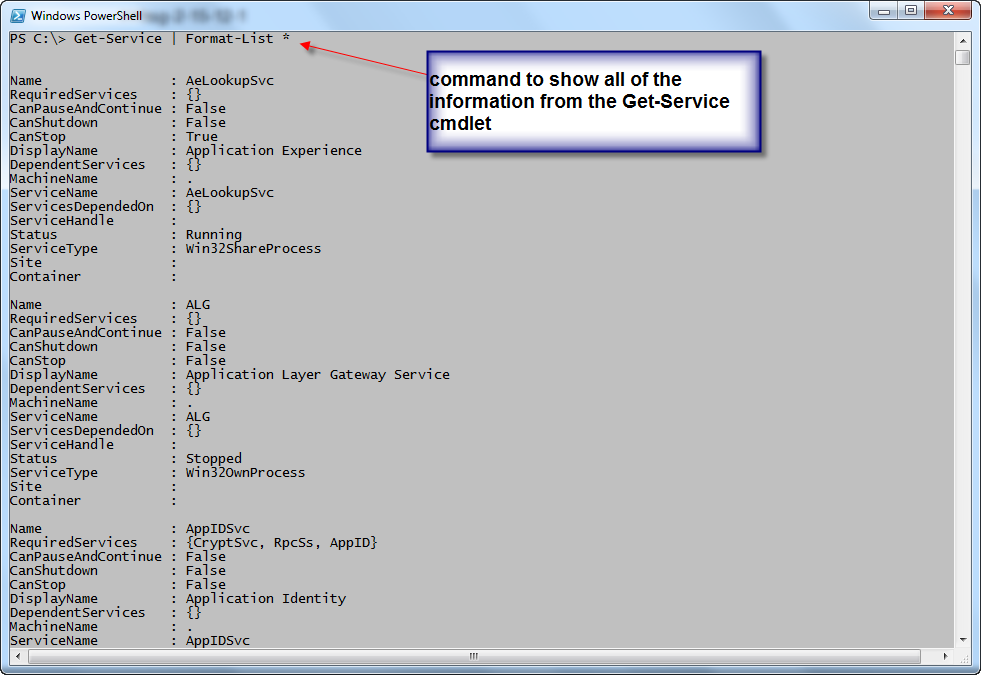 “OK. I am looking at this output, and I still do not see anything about the service account that a service uses to start up,” she complained.

“Well, I did not say it was there, did I? I just asked you if you had looked at all of the information that the Get-Service cmdlet provides,” I stated. “To find the service account start-up information, you need to use WMI. Remember yesterday when we talked about Using PowerShell to Get Hardware Information? You can use the same technique today as you used yesterday.”

The Scripting Wife thought for a few seconds, and then she typed the following command. 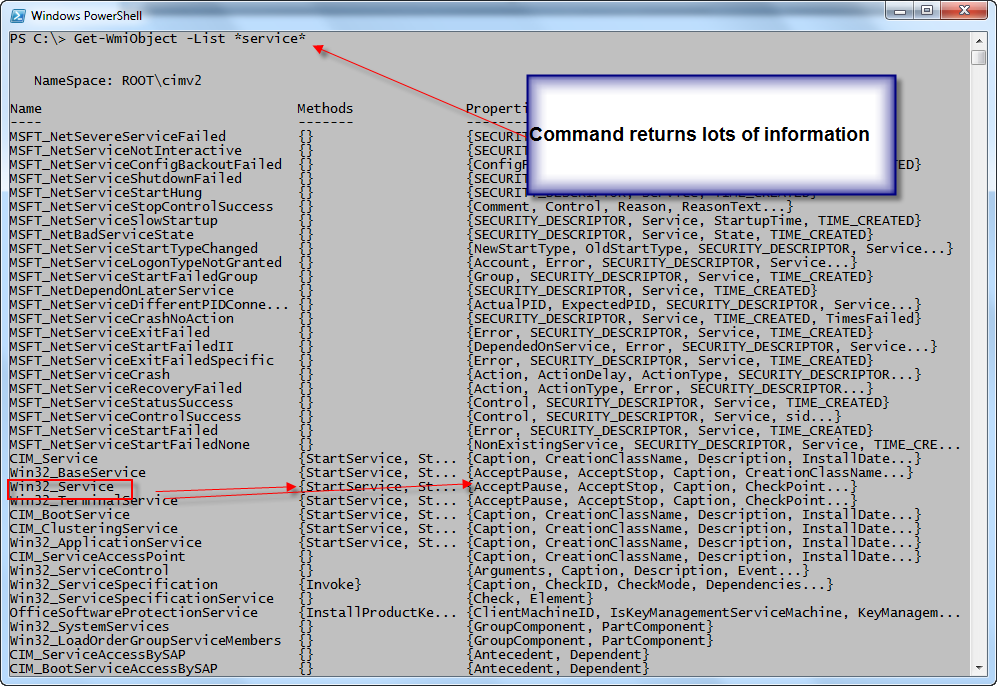 “Use the same technique that you used yesterday to find the WMI class you need to work with services,” I prompted.

Within a few minutes, the Scripting Wife was pointing at Win32_Service.

“Now use the Get-WmiObject cmdlet to query that WMI class,” I said.

It did not take her long to modify her command line to query the Win32_Service WMI class. Here is the command she composed.

The command and the associated results are shown in the image that follows. “OK, so where are the service accounts?” she asked.

“Remember, you need to use the same technique that you used with the Get-Service cmdlet to retrieve all the information,” I said.

She thought for a bit, then pressed the Up arrow to retrieve the previous command. Then she added a pipeline character and the Format-List cmdlet. The revised command is shown here. 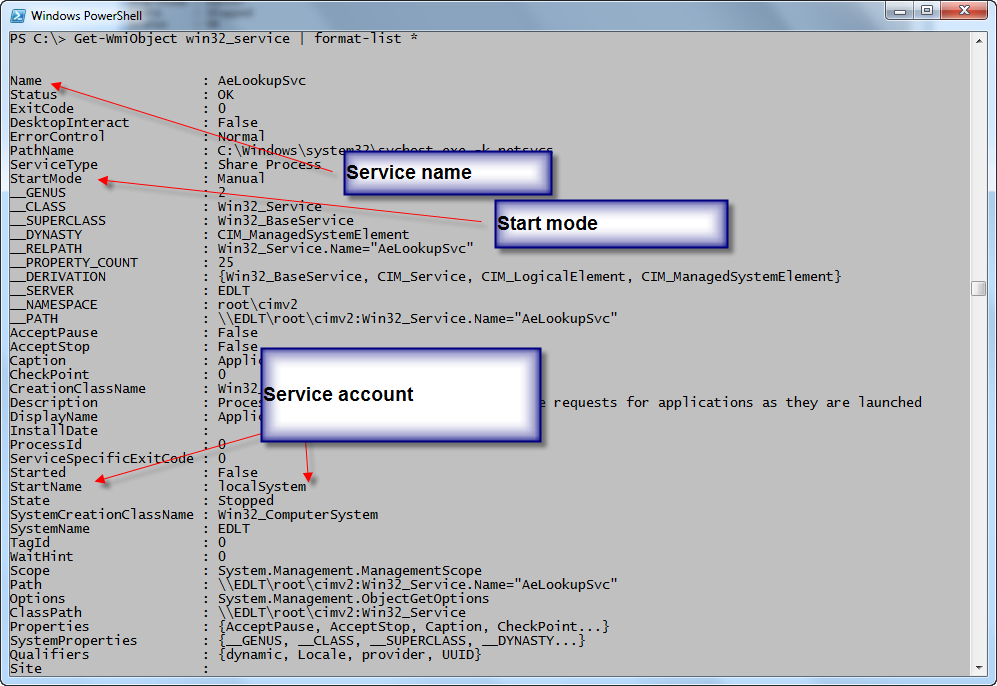 “So where is the service account name?” she asked.

This time the Scripting Wife did not hesitate. She first cleared the screen, then used the Up arrow to retrieve the previous command. She then edited it by changing it to a Format-Table command. The command that she arrived at is shown here with its associated output. 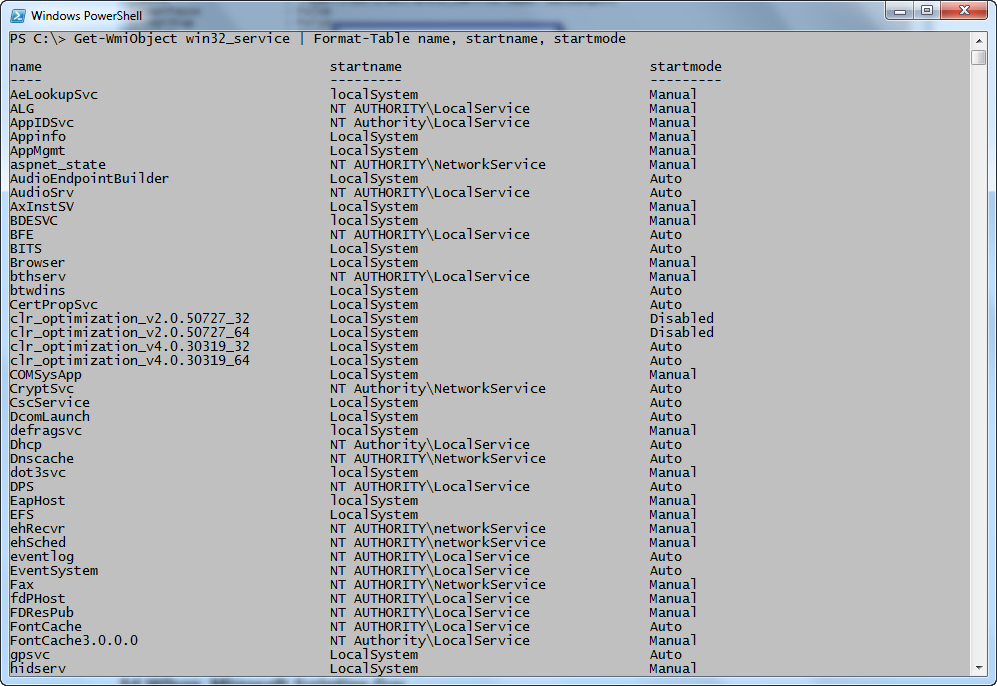 And with that, she was gone. Just in time for the Andante movement in D-major. Brahms may not have had Windows PowerShell in mind when he wrote, but somehow it seems to fit.

Doctor Scripto
February 16, 2012
0 comment
Scripting Wife Learns to Work with Text Files
Summary: The Scripting Wife learns to use Windows PowerShell to write to text files and to include the date in a log. Microsoft Scripting Guy, Ed Wilson, is here. The ...