Microsoft Scripting Guy, Ed Wilson, here. It must be spring—at least in the Charlotte, North Carolina area in the United States. Last week, I had the 2012 Scripting Games kick off meeting with management, and I am really looking forward to this year’s games. Dr. Scripto is finally thawing out from the snowy winter weather, and he is ready for spring and the games. (Thanks to my editor, Dia Reeves in Redmond Washington, for the picture.) 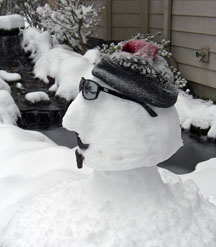 In fact, I have been quietly planning for several months now. There will be two categories: Beginner and Advanced. Just like last year, the beginner’s division is really for beginners. If you have been wanting to learn Windows PowerShell, but you did not know how to go about it, you definitely need to sign up for the 2012 Scripting Games to give yourself a bit of added incentive. If you want to take your skills to the next level, you will want to participate in the advanced category.

In a major departure from previous rules, if you want to compete by using the beta version of Windows PowerShell 3.0, you are welcome to use it. You will be limited to the most recent version that is publically available, and you must specify that when you submit your scripts.

Even if you are not planning to enter the 2012 Scripting Games (and I cannot fathom why because they are fun, free, and functional) the materials from the 2010 and 2011 Scripting Games combine to create a great hands-on lab for learning Windows PowerShell scripting.

The 2012 Scripting Games will officially launch on Monday April 2, 2012. Just like last year, things will be a bit different from a Windows PowerShell perspective, and I intend to put scriptwriters of all levels of accomplishment through the paces of ten real-world-based scenarios.

The second obvious thing to mention is that the events are live a week before the answers will be available for viewing. This means that Event 1 reveals on Monday April 2, 2012, and you will be able to submit your answer on that same date. However, no one will be able to view the answers that are submitted to PoshCode for Event 1 prior to Monday April 9, 2012. On Monday April 9, 2012, submissions for Event 1 cease. This adds to the mystery of the event and heightens suspense.

There are probably a dozen tweaks and improvements to the 2012 Scripting Games, but the essential elements are unchanged. We are continuing our partnership with PoshCode this year because I think it is cool to collaborate with Microsoft MVPs, and I am all about community participation. Besides all that, the PoshCode people are fun to work with.

What else do I need to say? Oh yeah, how about prizes? There will be awesome prizes this year…stay tuned for that announcement. How about celebrity judges, expert commentators, and other stuff? Check, check, and check!

For more information about this year’s games, see our TechNet Radio podcast: Announcing the 2012 Scripting Games.

On Twitter, I will be using the tag #2012SG, so it will be easy to filter out tweets related to the games. Be sure to check out the Scripting Guys Facebook page too.

I hope you are as excited about the 2012 Scripting Games as I am—they will be awesome!

Beat the Auditors, Be One Step Ahead with PowerShell
Summary: Microsoft PFE, Georges Maheu, opens his security assessment toolbox to discuss a Windows PowerShell script he uses to look at Windows services. Microsoft ...