Hey, Scripting Guy! How Can I Write to the Registry with Windows PowerShell 2.0?

Hey, Scripting Guy! Is it very difficult to use Windows PowerShell 2.0 to write to the Windows registry? We have a mixture of Windows 7, Windows Vista, and Windows XP on our desktop computers. I was thinking that if it is not too tough, I would like to use the registry to help in performing desktop audits. I could place information about checks in the registry, and later read that registry key to see if the check has completed. Will this work?

Microsoft Scripting Guy Ed Wilson here, the 2010 Scripting Games are winding down—we are kicking off the wrap-up today. Beginner Event 1 was a task that required checking for the existence of a registry key, and creating it if it did not exist, or merely update the value if it did exist.

For a good introduction to using Windows PowerShell to work with the registry, see The Scripting Wife, Windows PowerShell, and the Registry. For some more advanced topics, check out some of the other registry articles in the Hey, Scripting Guy! Blog archives. There you will find articles such as changing default values of registry keys, listing user profiles, recently run programs, or changing browser history settings.

This scenario sounds exactly like the one you described. For Event 1 in the 2010 Scripting Games, a particular registry key was specified. The registry key is seen in the following image. Let’s take a look at a script that was submitted by RKusak. In reality, I do not consider this to be a beginner script because of the use of help tags and cmdlet binding. However, it is a best practice to use help tags because it allows your scripts and your functions to interact with the Get-Help cmdlet from Windows PowerShell.

Use of help tags was discussed in a Hey, Scripting Guy! Blog post back in January 2010.

This is a tremendous advantage for several reasons. The first is that it simplifies your coding—you do not have to define help parameters, and code checks for the existence of those help parameters. The second advantage is that it allows your script or function to behave just like standard Windows PowerShell cmdlets; therefore, users will automatically know how to use your script. Last, it makes your script easier to read because when you see the help tags, you immediately know what the code does, and you will not need to study the code to figure out what the writer of the script is trying to accomplish.

One thing, I should point out is that although this script only has the help tags in the function, you can also place them at the top of the script so that you would be able to use the Get-Help cmdlet to retrieve help for the entire script. You can therefore add help tags to a script and to each function in the script if you wish. If you anticipate using a function in other scripts or perhaps one day incorporating the function in a module, you should add help tags to the function. On the other hand, if you do not foresee such a case, but rather have used the functions to group your code to make it easier to read and to maintain, add the help tags to the top of the script, and do not bother with adding them to your functions.

One improvement to the help section would be to add additional examples of syntax usage. As a best practice, you should include an example of using each parameter, as well as different combinations of parameters. If you use realistic values for the parameters, it makes the examples even better. For example, there is no foo or bar registry key, and a prospective script user might not understand the relationship between registry keys and property value names. An example that uses a common registry entry will make that clear.

The script uses CmdletBinding and specifies specific positions for the first three parameters. The last parameter is used to identify the type of registry value that is being assigned. This would allow you to call the function and supply the values for the function. There is not a mechanism to supply these values from the command line when calling the script. To use this function, you need to incorporate it into another script, function library, or module. If you dot-source it into a Windows PowerShell console, you could use the function, but the code outside the function will also run and therefore will create the scriptingguys registry key on your computer. You would not need to use the parameter name because you could call the script using positional parameters. If the script had been designed to accept piped input, it would have been even more useful. You could then use the Get-Content cmdlet to read a text file, and pipe the results to the cmdlet to make a series of changes. The parameter section of the function is seen here:

One thing to keep in mind when using the Test-Path cmdlet is that it will verify the existence of a registry key, but not the registry key property. In the Event 1 scenario, the 2010ScriptingGames registry key will return True if it exists and False if it does not exist. However, the LastUpdate property will always return False even if it does exist. Therefore, the function will verify if 2010ScriptingGames exists, but not LastUpdate. By using New-ItemProperty with the –Force parameter, the LastUpdate property will be created if it does not exist, or it will be updated if it does exist. If the –Force parameter was not used, an error would be returned if the property already existed. Set-ItemProperty will update a property that exists, but if the property does not exist, it returns an error. The code that works with the registry is shown here:

The entry point to the script calls the SetRegistryKey function. It is a best practice to use the verb-noun combination. Instead of calling this function SetRegistryKey, it should have been named Set-RegistryKey. If this function is ever placed into a module, it will need to be renamed, or else a warning message will be displayed when the module is imported into a Windows PowerShell session. In addition, I generally prefer a more significant differentiation between the end of a function, and the entry point of the script. I generally do this in two ways. I add a tag to the closing curly bracket of the function with the function name, and I add a comment indicating the entry point to the script. Here is the way I would have done that for this script:

This makes the code a bit easier to read, especially if it is a very long script with many functions. Some editors provide the ability to collapse functions and create regions, which makes these conventions unnecessary. You need to convert the datetime object into a string. This script uses the format parameter to select the month, day, and year separated by forward slashes. The hour, minute, and seconds are displayed with colons as separators. The tt means that “A.M.” or “P.M.” will be displayed as appropriate. This is shown here:

This section of the script that writes the date to the registry is shown here:

The Advanced Event 1 of the 2010 Scripting Games, added the requirement to edit the registry of a remote computer to the scenario. WYN submitted the Adv_WYN.ps1 script that uses the help tags for the script itself, it also creates command line parameters. This allows you to obtain help without having to open the script and read the comments. In addition, you can control the way the script operates without having to directly edit the script. The functions and the main portion of the script are clearly delineated by comments. The functions adhere to the verb-noun naming convention, and standard verbs such as new and set are used in creating their names.

When the Adv1_WYN.ps1 script runs, it produces the output shown in the following image. 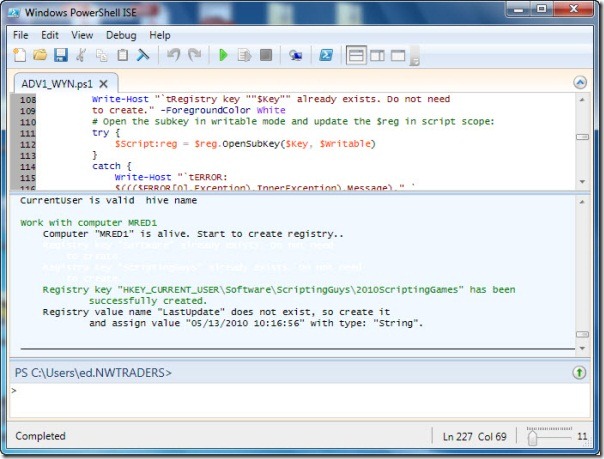 RG, that is all there is to using Windows PowerShell to work with the registry. The 2010 Scripting Games Wrap-Up Week will continue tomorrow.